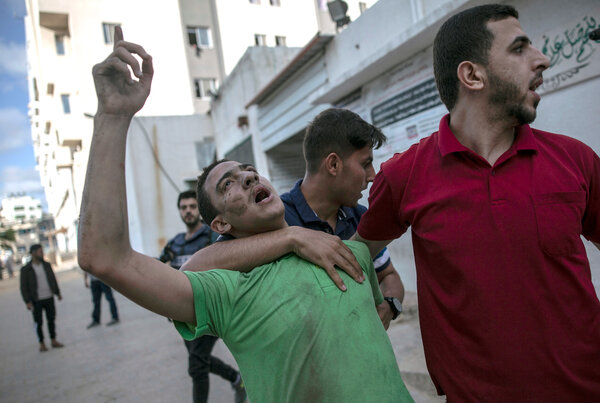 Israel pounded targets in Gaza overnight and Hamas continued to unleash a barrage of rockets at towns across southern Israel as the conflict settles into a steady routine, with levels of violence not seen since 2014 — a seven-week conflict that claimed 2,200 lives, rendered large areas of the Gaza Strip uninhabitable and paralyzed Israel’s south.

On Sunday, diplomats and international leaders were unable to mediate a cease-fire, and the U.N. Security Council failed to agree on a joint response to the bloodshed. Meanwhile, the Biden administration is trying to negotiate a humanitarian pause to help Palestinians who have been forced from their homes. Similar efforts in the past have been a key first step toward winding down hostilities.

Many of Israel’s military attacks are meant to destroy what it calls the Hamas “metro” system, an underground network of tunnels. It is also targeting a less-discussed and murkier threat: Hamas’s naval commando units.

For its part, Hamas has fired at least 160 rockets at Tel Aviv — a largely liberal and secular beachside city and financial hub — in retaliation for what the group said were Israeli airstrikes against civilian buildings.

Apple assembles nearly all of its products and earns a fifth of its revenue in greater China. But just as the chief executive Tim Cook figured out how to make China work for Apple, China’s leader, Xi Jinping, is making Apple work for Beijing.

Internal documents reviewed by The Times, interviews with current and former employees and new court filings provide rare insight into how the American tech giant has given in to escalating demands from the Chinese authorities.

Apple has largely ceded control to the Chinese government at data centers in Guiyang and the Inner Mongolia region. Chinese state employees physically manage the computer servers that store the personal data of Chinese customers. And Apple abandoned the encryption technology it used elsewhere after China would not allow it.

Such compromises have made it nearly impossible for the company to stop the Chinese government from gaining access to the emails, photos, documents, contacts and locations of millions of Chinese residents, according to security experts and Apple engineers.

Quotable: “Apple has become a cog in the censorship machine that presents a government-controlled version of the internet,” said Nicholas Bequelin, Asia director for Amnesty International.

Cyclone Tauktae is likely to make a landfall on Monday evening in Gujarat, an Indian state struggling with a devastating second coronavirus wave, after wiping out hundreds of homes and killing at least 12 across four other coastal districts.

It has forced many regional governments, most of them severely affected by rising Covid-19 cases, to divert resources to evacuate tens of thousands of people and minimize storm damage.

The authorities in Maharashtra State, which includes Mumbai, said they had shifted hundreds of sick patients from makeshift Covid care facilities and halted vaccination for four days as the storm moved through the area on Monday.

Covid is killing babies and small children at an unusually high rate in Brazil, and doctors are baffled.

As the health care system fails, clandestine markets are emerging for drugs, oxygen, hospital beds and funeral services in India, as scams put residents at risk.

Lockdown is over in England for now, but the emergence of a new variant is threatening to reverse the country’s progress.

A wave of pandemic refugees at the U.S.-Mexico border — including many from India — has caught the Biden administration by surprise.

The U.S. will send 20 million vaccine doses in June to countries struggling with the pandemic.

In two Taliban-controlled districts of Afghanistan, girls have fled to get an education after the group pushed 6,000 students out of school.

Thousands of immigrants who live in the U.S. on temporary visas and traveled to India in recent weeks have been stranded there under the Biden administration’s travel ban.

U.S. Olympic surfers from Hawaii will compete in the games under their country’s flag, but they’d rather reflect the island’s pre-colonization history under its own.

A World Health Organization study found that 745,000 people died in 2016 from excessive working hours, with the worst problems in Southeast Asia and the Western Pacific region, the BBC reports.

The U.S. Supreme Court will hear a major abortion case that challenges Roe v. Wade, the 1973 decision that established a constitutional right to abortion.

Telecommunications giant AT&T will spin off WarnerMedia, which includes HBO and CNN, reversing deals worth hundreds of billions of dollars.

The U.S. and Europe are beginning talks to resolve a conflict over steel and aluminium imports that was a major front in the Trump administration’s trade war and a serious burden on trans-Atlantic relations.

While the French government is struggling with a backlog of asylum cases, French families are opening their doors.

Pyramiden, a High Arctic ghost town on the Norwegian archipelago of Svalbard, has been preserved by the cold climate since the Russian government abandoned it in 1998. Its hotel — likely the northern-most in the world — is staffed by a small community of Russians and Ukrainians, who welcome adventurous travelers looking to spend the night.

Long before the pandemic shuttered borders and relegated people to their homes, the organizers of the Eurovision Song Contest alighted on a poignant theme for the 2020 event: “Open up.” Alas, it was canceled.

But this year’s event in the Dutch city of Rotterdam occurs as Europe begins to do just that. The Netherlands, the victors in 2019, have administered at least one dose of a coronavirus vaccine to about 30 percent of its population and plans to further ease lockdown measures this week.

More than half of the 39 competing countries have re-selected their 2020 entries, and competitors will likely bring similar high-octane histrionics as in previous years. But they’ll do so in a dramatically different environment: Even at Saturday’s Grand Final, capacity will be capped at 20 percent and the ticketed few must show a negative coronavirus test.

Even for Rotterdammers unable to attend in person, a hint of Eurovision camp has seeped beyond the walls of the Ahoy arena. The green lights of a nearby pedestrian walkway have been transformed into a dancing figure, wiggling away to Abba’s iconic 1974 winning hit “Waterloo” to signal it’s safe to cross.

The buttery cornmeal dish known as fungi is a staple in the Virgin Islands.

You can find all of our puzzles here.

That’s it for today’s briefing. See you next time. — Whet and Natasha

P.S. “Some Kind of Heaven,” a film from The Times and Magnolia Pictures about life in America’s largest retirement community, is streaming on Hulu.

The latest episode of “The Daily” is on the prosecution of the U.S. Capitol rioters.

You can reach Whet, Natasha and the team at [email protected].

Opinion | The Making of a Chinese Patriot

An epidemic of despair as crippling as Covid-19