We’re covering China’s latest vaccine push, and a look at the consequences of Agent Orange in Laos. 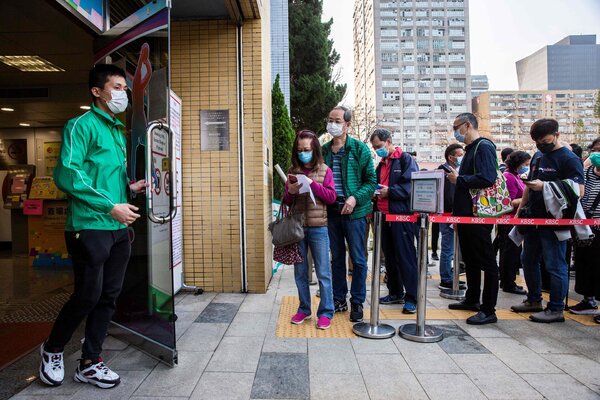 Chinese embassies in a growing number of countries, including the U.S., have begun requiring that foreigners entering China must first be fully inoculated with a Chinese-made coronavirus vaccine if they want to avoid extensive paperwork requirements.

That rule may make the visa process difficult for people in countries like the U.S. and most nations in Europe, where no Chinese-made vaccines have been approved for use.

Details: The rules, which enable visitors to bypass strict requirements like a negative nucleic acid test, detailed health and travel records, and a government agency invitation, currently apply to visitors from Hong Kong, Britain, Japan, Norway, Pakistan, the Philippines, Thailand, the United States, Vietnam and at least a dozen other countries.

The European Medical Agency said the benefits of the AstraZeneca vaccine, under scrutiny after reports of blood clots in a handful of vaccinated people, far outweigh the risks. About a dozen countries have suspended its use, setting back an already fraught inoculation campaign in Europe.

Papua New Guinea, which had largely avoided the coronavirus, is now sounding the alarm over an outbreak. Nearly half of the country’s 2,269 infections to date were reported in the last two weeks.

Xi Jinping, China’s top leader, has promoted a vision for growth that does not include greenhouse gas emissions, but companies and regions dependent on fossil fuels aren’t making it easy.

The goal is to move toward two signature commitments: Making sure that China’s carbon emissions peak before 2030, and reaching net carbon neutrality before 2060.

The problem, in a word, is coal: It has fueled China’s industrial takeoff and made it the world’s top-polluting nation in recent decades. Powerful provinces, state-owned companies and industry groups say China still needs to use large amounts of coal for years to come.

President Vladimir Putin of Russia authorized extensive efforts to interfere in the U.S. election to hurt Joe Biden’s chances, including operations to influence people close to Donald Trump, according to a newly declassified intelligence report.

The report did not name Russia’s targets but seemed to refer to Rudolph Giuliani, Mr. Trump’s personal lawyer, who relentlessly pushed allegations of corruption about Mr. Biden and his family. China considered similar efforts, but concluded that such an operation would fail, the report found.

The U.S. intelligence community also determined that Iran attempted to aid Mr. Biden in the final days of the election by spreading emails that falsely claimed to be from the far-right group the Proud Boys. Unlike in 2016, there were no efforts by Russia or other countries to change actual ballots, the report found.

On a visit to Tokyo, Secretary of State Antony Blinken and Secretary of Defense Lloyd Austin rebuked what they called “coercion” and “destabilizing actions” by China’s military. Blinken is set to meet with two top Chinese officials on Thursday in Alaska.

North Korea warned the Biden administration to “refrain from causing a stink” when Blinken and Austin visit South Korea this week.

Melek Ipek faces a life sentence in Turkey after she killed her abusive husband. Feminist groups have risen to her defense, igniting a fiery national conversation about women’s rights and a lack of punishments for domestic abuse.

America has never taken responsibility for spraying Agent Orange, an herbicide laced with one of the most toxic substances ever created, over Laos during the Vietnam War. But generations of ethnic minorities have endured the consequences. The Times Magazine looked at one of the last untold stories of the American war in Southeast Asia.

More than a century of the Book Review

As The New York Times Book Review turns 125, you can comb through a timeline of some of the most significant moments in its history:

In 1905, shortly before the publication of “The House of Mirth,” a portrait of Edith Wharton became the first photograph to appear on the section’s cover.

In 1926, after A.A. Milne introduced the world to Winnie the Pooh and Christopher Robin, one young reader — Milne’s son, the original Christopher Robin — threatened “to take revenge upon his dad by writing poems about him.”

In 1953, after the English publication of Simone de Beauvoir’s “The Second Sex,” which would go on to shape the modern women’s movement, a reviewer called it “a truly magnificent book, even if sometimes irritating to a mere male.”

In 1988, after “Beloved” did not win the National Book Award, the Book Review published a statement in Toni Morrison’s defense, signed by 48 Black writers.

Samin Nosrat loves to use this recipe for Kuku Sabzi, a Persian herb frittata, for the contrast between its vivid herbaceous interior and its dark, sweet crust. It’s part of her collection of 10 essential Nowruz recipes.

New surveys over the last year show that the ability to cope improves with age. We looked at why older people managed to stay happier, even through a pandemic.

That’s it for today’s briefing.

See you next time. — Melina and Amelia

The latest episode of “The Daily” is on U.S. conservatives divided over wind energy.

Sanam Yar contributed reporting. You can reach the team at [email protected].

Michael Kelly: 'We must stop forcing older people to pay with their homes for age-related illnesses'