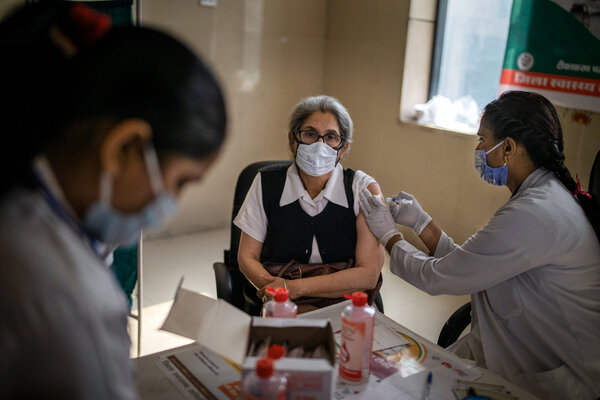 Regulators may soon issue their first formal warnings about AstraZeneca’s vaccine and rare blood clots, threatening to cloud the critical global rollout of a cheap and easy-to-store vaccine, after a top vaccine official at the European Medicines Agency said that there did appear to be a link.

The agency said it would meet this week to consider updating its guidance, but it has not formally changed its formal advice, issued last week, that the benefits of the AstraZeneca vaccine outweigh the risks.

By the numbers: The clots are, by all accounts, exceptionally uncommon, with 44 cases of cerebral venous sinus thrombosis, 14 of them fatal, among 9.2 million people who received the vaccine — equivalent to a risk for one in every 100,000 people under 60 given the vaccine.

The International Monetary Fund said it was upgrading its global growth forecast for the year to 6 percent from 5.5 percent, thanks to vaccinations of hundreds of millions of people.

Coronavirus variants have slowed U.S. progress against the pandemic, and cases are rising in most states. Here’s a state-by-state breakdown.

Local initiatives across Britain are working to dispel misinformation and encourage vaccination in minority communities that have been disproportionately hurt by the pandemic.

New Zealand announced plans for a travel bubble with Australia that would open on April 19, allowing people to travel between the two countries without going into quarantine.

Saudi Arabia said it would restrict access to the Grand Mosque in Mecca during Ramadan to people who have been vaccinated or who have recovered from Covid-19.

Startling emails detailing an intricate effort by Ikea executives in France to dig up information on employees, job applicants and even customers are now at the center of a criminal trial that has riveted public attention in France.

Prosecutors are accusing the French arm of Ikea, the Swedish home furnishings giant, and some of its former executives of engineering a “system of espionage” from 2009 to 2012. A former military operative was hired to execute some of the more elaborate operations.

The deputy public prosecutor of Versailles is seeking a fine of 2 million euros ($2.35 million) against Ikea France, prison terms of at least a year for two former company officials and a private investigator, and fines for some store managers and police officers. In all, 15 people have been charged. A verdict from a panel of judges is scheduled for June 15.

Background: The case stoked outrage in 2012 after the emails were leaked to the French news media, and Ikea promptly fired several executives in its French unit, including its former chief executive. There is no evidence that similar surveillance occurred in other countries.

Netanyahu attempts to assemble a government

Prime Minister Benjamin Netanyahu of Israel now has a possible path to staying in office even as he stands trial on corruption charges, after Reuven Rivlin, Israel’s president, gave him 28 days to try to form a new coalition government.

A political survivor and Israel’s longest-serving prime minister, Mr. Netanyahu has spent the last 12 years in office. But after four inconclusive elections in two years, he and his allies have failed to win enough support to ensure a parliamentary majority that could decisively end the country’s political deadlock.

“The results of the consultations, which were open to all, led me to believe that no candidate has a realistic chance of forming a government that will have the confidence of Parliament,” Mr. Rivlin said in a televised address. But, he added, “The law obliges me to entrust one of the candidates with forming a government.”

Next steps: To assemble a right-wing government, Mr. Netanyahu needs both the support of another small right-wing party and for the far-right flank of his potential coalition to agree to rely on the support of a small Arab, Islamist party that has become a possible kingmaker. The other option is for Mr. Netanyahu to woo defectors from the opposite camp.

Honduras has barely begun to recover from two hurricanes that hit late last year. With relatively little disaster relief from the U.S., many Hondurans are heading for the border.

Aleksei Navalny, the jailed Russian opposition leader who is nearly a week into a hunger strike at a penal colony, showed signs of respiratory illness and has been moved to a prison infirmary, prison doctors said.

Negotiations are underway in Vienna to try to bring both the U.S. and Iran back into compliance with the 2015 nuclear deal. The talks are intended to restore strict controls of Iran’s nuclear enrichment to make sure that the country cannot build a nuclear weapon. The U.S. would, in exchange, lift sanctions imposed by President Donald Trump.

Employees and associates of Prince Hamzah bin Hussein of Jordan were still being held in detention on Tuesday, their relatives said, casting doubt on claims by the royal court that it had resolved an unusually public rift.

A report of secret elite dinner parties being held across Paris in violation of nationwide coronavirus restrictions has set off outrage in France. In response, the Paris prosecutor’s office said on Monday that it would investigate.

Yahoo Answers — where users sought advice, trivia and explanations — is shutting down after 16 years.

The Senate parliamentarian ruled that Democrats could reuse this year’s budget blueprint, potentially allowing them to push through President Biden’s $2 trillion infrastructure plan, among other spending and tax packages this year, without a single Republican vote.

Young Chinese consumers are growing more nationalist and likelier to choose domestic brands, our New New World columnist writes. The anger over Xinjiang cotton has given Chinese brands another chance to win over consumers.

Millions of people driven from their homes during Syria’s 10-year civil war are crowded into an area of the country’s northwest controlled by a rebel group.

Our reporter took a rare visit to Idlib Province, above, where shocked and impoverished Syrians are trapped in a murky and often violent limbo.

After a year’s delay, the Tokyo Olympics appear set to proceed this summer, albeit in most unusual circumstances. Here’s what we know about the Games. And here’s a schedule of events.

Are the 2021 Olympics canceled?

No. After being delayed for a year because of the pandemic, the Summer Games are currently scheduled to take place from July 23 to Aug. 8. The Paralympics are set to take place Aug. 24 to Sept. 5.

Surveys show that 70 percent to 80 percent of people in Japan think the Games should not go on this summer.

Yes, despite coming a year late. Branded gear will reflect that.

Will there be anyone in the stands?

Japanese fans can attend events, as of now. But most international visitors will not be allowed to come to Japan for the Olympics. Getting ticket money back may take a while.

Who is the mascot?

Miraitowa is the mascot of the Games, and Someity is the Paralympics mascot. The name Miraitowa is drawn from the Japanese words for “future” and “eternity.” Someity’s name is taken from a type of cherry tree. You’ll have to judge for yourself what animals or creatures they resemble.

Where will future Games be held?

How many times has Tokyo hosted the Games? Pandemic aside, is the city ready?

Unlike other recent hosts, notably Rio de Janeiro in 2016, it appears that Tokyo has its stadiums and infrastructure in order, although surprises sometimes arise when athletes start arriving.

What are the new sports and events?

Baseball and softball return after a 13-year absence. The new sports are karate, surfing, sport climbing and skateboarding. (Competitors will surf in the ocean off Shidashita Beach, about 40 miles from Tokyo.)

Making croissants at home is tricky — but yields miraculous results. Here’s our guide.

In “Peaces,” by the award-winning British-Nigerian author Helen Oyeyemi, young lovers and their pet mongooses take a Wes Anderson-style ride on a train to nowhere.

Tarot cards are less about predicting the future than they are about reflecting on your life. Here’s how to get started.

Here’s today’s Mini Crossword, and a clue: Food that can be ordered “Everything with nothing” (five letters).

That’s it for today’s briefing. Thanks for joining me. — Natasha

P.S. Frank Bruni is stepping down from his post as a Times Opinion columnist and joining Duke University in June. He will continue to write his newsletter.

The latest episode of “The Daily” is about online vengeance.

Reach Natasha and the team with comments, questions and croissant success stories at [email protected].

Opinion | There’s No Excuse for Mistreating Children at the Border. Here’s What To Do About It.