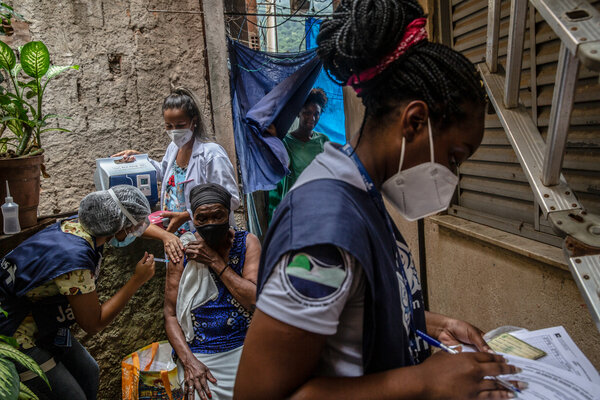 In much of the developed world, vaccine orders are soaring and economies are poised to roar back to life. But in poorer nations, the virus rages on. In India, people are gasping for oxygen; thousands are dying daily in Brazil, and vaccination progress in countries as varied as Ghana and Bangladesh has faltered.

That split screen was never supposed to be so stark. A total of 192 countries signed up last year for Covax, a vaccine-sharing partnership, and the Gates Foundation poured $300 million into an Indian factory to make doses for the world’s poor. The European Union’s top executive told a global summit last June, “Vaccination is a universal human right.”

Yet as of mid-April, wealthy countries had secured more than 87 percent of the more than 700 million doses of vaccines dispensed worldwide, while poor countries had received only 0.2 percent, according to the World Health Organization.

Quotable: “It’s a moral issue,” said Boston Zimba, a doctor and vaccine expert in Malawi, which has vaccinated only 2 percent of its people. “This is something rich countries should be thinking about. It’s their conscience. It’s how they define themselves.”

Pfizer said its Covid-19 vaccine had generated $3.5 billion — nearly a quarter of its revenue — in the first three months of this year.

The stark gap in vaccination rates is emerging as a test for how the world responds to another global challenge: averting the worst effects of climate change.

The Castello di Rivoli, one of Italy’s most renowned contemporary art museums, has set aside its third-floor galleries for a vaccination center.

President Biden announced new measures to reach the goal of getting 70 percent of American adults at least partly vaccinated by July 4.

Netanyahu fails to assemble a government

Benjamin Netanyahu, the Israeli prime minister, failed to assemble a government by the Tuesday night deadline offered by the president, putting his political future in jeopardy as he stands trial on corruption charges and prolonging a state of political deadlock that has only worsened after four elections in two years.

Israel’s president, Reuven Rivlin, may now give a rival, eclectic camp of anti-Netanyahu parties a chance to form a government, which could mean the prime minister’s ouster after 12 consecutive years in office.

Details: Though his right-wing Likud party is the largest on Israel’s fractured political scene, Netanyahu could not assemble enough coalition partners to command a majority in the 120-member Parliament, after his far-right allies refused to join a government supported by a small Islamist Arab party.

Mount Meron tragedy: A government plan to limit attendance at an annual religious festival, where a stampede killed 45 people last week, was ignored because no department took responsibility for implementing it.

A long-feared subway crash in Mexico

A subway overpass in Mexico City collapsed on Monday night, sending a train plunging to the ground and killing at least 24 people, including children.

Emergency workers scrambled to the scene, where tilted train cars lay amid tangled wires and twisted metal, and pulled dozens of people from the wreckage. More than 70 people were taken to hospitals with injuries. Officials struggled to identify victims.

The accident — and the government’s failure to fix known problems with the subway line — immediately set off a political firestorm for Mexico’s president and the two people believed to be front-runners to succeed him as leader of the governing party and, possibly, the country.

Troubles: Since it opened nearly a decade ago, the line had been plagued with structural weaknesses that led engineers to warn of potential accidents. In recent years, Mexico City’s subway system, the second largest in the Americas, has become a symbol of urban decay.

The Catalan separatist Jordi Cuixart, above, who is serving a nine-year prison sentence for leading an independence movement in his region, is seen by many as one of a group of martyrs being held because of their political views.

The far-right French leader Marine Le Pen was acquitted on charges of disseminating violent messages, stemming from photos of Islamic State violence that she had posted on Twitter.

The police in Germany have arrested a 53-year-old man with a history of support for the far right in connection with a series of death threats sent to well-known progressives.

As Group of 7 foreign ministers meet in London this week, a key item on the agenda will be the emerging global competition between democracy and the authoritarian visions of Moscow and Beijing.

Severe weather in the U.S. killed at least three people and left tens of thousands without power in Arkansas, Mississippi, above, Georgia, South Carolina, North Carolina and Virginia.

China is building factories for electric cars almost as fast as the rest of the world combined.

The lawyer for Derek Chauvin, the former Minneapolis police officer convicted of murdering George Floyd, filed a motion asking for a new trial.

Marriage certificates in England and Wales will now allow couples to add their mothers’ — not just their fathers’ — names to their official record.

Those seeking to experience the raw, almost preternatural power of a volcano would be hard-pressed to find a better place than Stromboli, northwest of the toe of Italy’s boot and aptly known as the Lighthouse of the Mediterranean.

Rising a mere 3,000 feet above the waves of the Tyrrhenian Sea, the seemingly diminutive volcanic isle is famed for its near-continuous summit explosions.

Many psychologists use the word “flourishing” to describe a person’s overall well-being — physical, mental and emotional, all of which feed on each other. “It’s living the good life,” Tyler VanderWeele, an epidemiologist, told The Times.

In the pandemic, many people have understandably been doing the opposite of flourishing: languishing, or feeling stagnant, with dulled emotions and motivation. A Times story on languishing was one of our most-read articles in recent weeks.

There are simple habits, backed by science, that can help you flourish. They include celebrating small moments in life, like a warm bath or hanging out with a friend; setting aside time once a week to reflect on the things you’re grateful for; and volunteering, even for a couple of hours a week. (Are you flourishing? Take this quiz.)

“People think that in order to flourish, they need to do whatever their version of winning the Olympics is, or climbing a mountain, or having some epic experience,” Adam Grant, a psychologist, said. The reality is the opposite.

Make the most of spring greens with this one-pot meal of gnocchi and vegetables in a tangy sauce.

In the wake of wars, natural disasters and insurgencies, Mozambique is experiencing an environmental renaissance. One of the results is a stunningly beautiful national park, Chimanimani.

What to Listen To

St. Vincent, whose new album is called “Daddy’s Home,” expounds on some of the things that feed her creativity, including lengthy documentaries, a Janet Jackson bust and a Joni Mitchell album.

That’s it for today’s briefing. See you tomorrow — Natasha

P.S. Karan Deep Singh, our reporter in New Delhi, spoke to CNN about the search for oxygen during India’s Covid crisis.

The latest episode of “The Daily” is about the population slowdown in the U.S.

Sanam Yar wrote today’s Arts and Ideas. You can reach Natasha and the team at [email protected].

Opinion | The Pipe Dream of Bipartisanship

Editorial: 'Tories need to listen to the bard, not their own fiction'