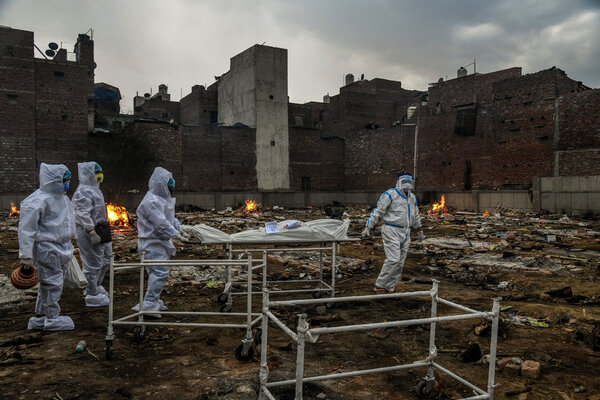 The number of people in India who have died during the coronavirus pandemic is likely to exceed three million — nearly 10 times the official virus death toll, according to a new study.

The Center for Global Development, a Washington research institute, attempted to quantify excess deaths from all causes during the pandemic based on state data, international estimates, serological studies and household surveys.

The study estimated that 3.4 million to 4.7 million more people than would normally be expected died from January 2020 to June 2021, and suggested that deaths from Covid-19 alone might have reached four million.

A chorus of experts have called official government numbers a gross understatement.

Vaccinations: About 6.3 percent of India’s population is fully vaccinated. The country is still reporting nearly 40,000 new cases and about 500 deaths a day on average, according to a Times database.

Off the coast of East Africa, South Korea is airlifting the entire crew from a navy destroyer after hundreds of sailors tested positive for the virus.

Indonesia is extending coronavirus restrictions at least until Monday as the country celebrates a muted Eid al-Adha, one of the most important Muslim holidays.

A new study suggests that just one dose of the Johnson & Johnson vaccine may not work against the Delta variant.

The Delta variant now accounts for an estimated 83 percent of all U.S. cases, the C.D.C. director said.

Wildfires raged across the American West as another scorching heat wave was helping fuel a drought. Smoke from the blazes made its way across the continent, spreading to New York City and elsewhere on the East Coast.

In Oregon, the Bootleg Fire, the largest wildfire so far this year in the U.S., is so hot that it is generating its own weather. The blaze has a towering cloud of hot air, smoke and moisture that reached airliner heights and spawned lightning.

“Normally the weather predicts what the fire will do,” said a spokesman for the Oregon forestry department. “In this case, the fire is predicting what the weather will do.”

Context: Climate change is causing wildfires to be larger and more intense, as months of drought and last month’s blistering heat wave dry out the landscape.

The future: In Oakley, a small city in Utah, officials have stopped building in an effort to preserve the little water they have left. Oakley is not alone: Droughts and fires are challenging the future of development across the West.

Beijing was no fan of the U.S. during the Trump administration. President Biden seems like he might be an even tougher adversary.

In six months, the Biden administration has imposed sanctions over the repression in Xinjiang and the deteriorating business climate in Hong Kong. Now, it has rallied other nations to accuse China of cyberespionage.

The torrent of attacks has infuriated Beijing. China has responded with tit-for-tat measures, but these are not yet an effective counter to Washington’s new strategic approach.

Escalation: Although both sides have said that they want to avoid a new Cold War, they are plunging into an increasingly ideological conflict that shows little sign of easing. Around Taiwan, the quickening tempo of military operations increases the chances of armed confrontation — even if accidental.

Jeff Bezos, the richest person in the world, completed a short flight to space. He was accompanied by the youngest person ever to go to space, and the oldest.

Thomas Barrack, a close friend and top fund-raiser for Donald Trump, was indicted on a lobbying charge.

The Olympic debut of surfing promises big talent but as predicted, and feared, the waves on Tsurigasaki Beach may be woefully small.

The U.S. men’s and women’s basketball teams are the latest to be disrupted by the coronavirus.

Dentsu, the Japanese advertising giant, stood to be the biggest winner of this year’s Olympic Games. But the expectation of an enormous payout has dwindled in the pandemic.

While her competitors spent their days training for the Olympics, Joan Poh, a Singapore rower, spent much of the past year working long hours as a nurse. Follow our Olympics live updates.

Ben & Jerry’s will stop selling its ice cream in the Israeli-occupied territories.

Prince Harry will write a memoir that Penguin Random House, the publisher, said would be “the definitive account” of his experiences.

In Bangladesh, families usually crowd markets to pick out prime animals to sacrifice for Eid al-Adha, one of two major religious festivals of Islam. This year, as coronavirus cases surge, many people are turning to online marketplaces, and getting the animals delivered right to their doors.

A look at U.S. Olympic stars

The Tokyo Olympics start Friday, and we’ll be bringing you a lot of coverage through the Games. Americans will be closely watching three sports where the U.S. teams are especially strong this year.

Gymnastics: The U.S. women are favorites to win the team event for a third consecutive time, led by Simone Biles. If she can win the all-around competition again, she will be the first woman to repeat as the Olympic champion in over half a century.

Opinion | The Shameful Facts About Maternal Deaths in America

Opinion | America’s Billionaires Could Help Protect the Election. If They Wanted To.