SEOUL, South Korea — As North Korea’s leader, Kim Jong-un, convened ​a party congress over the past ​eight days, outside analysts wondered if his failure to improve the economic lives of his people would affect the dictator’s nuclear ambitions.

At the gathering of his ruling Workers’ Party, Mr. Kim provided an unequivocal answer: absolutely not.

Establishing a nuclear force, Mr. Kim said, ​has been “a strategic and predominant goal​” and “the exploit of greatest significance in the history of the Korean nation​.” In a resolution adopted on Tuesday at the end of the congress, laying out the party’s plans for the next five years, he vowed to “further strengthen our nuclear deterrence.”

During the party meeting, the first of its​ kind since 2016, Mr. Kim doubled down on his nuclear arms buildup, offering an unusually detailed list of weapons that ​the North was developing. They included “ultramodern tactical nuclear weapons,” “hypersonic gliding-flight warheads,” “multi-warhead” missiles, military reconnaissance satellites, a nuclear-powered submarine, and land- and submarine-launched intercontinental ballistic missiles that use solid fuel.

The country’s economy has been ravaged by the pandemic, extensive flood damage and years of international sanctions​. Mr. Kim admitted his economic plans had failed, but he said he ​did not see his nuclear weapons ​program as an obstacle toward rebuilding the economy.

Rather, he saw ​it as the best tool he had to ensure the continuity of his dynasty and extract economic and other concessions from the United States, which he called “our foremost principal enemy​” during the party meeting. 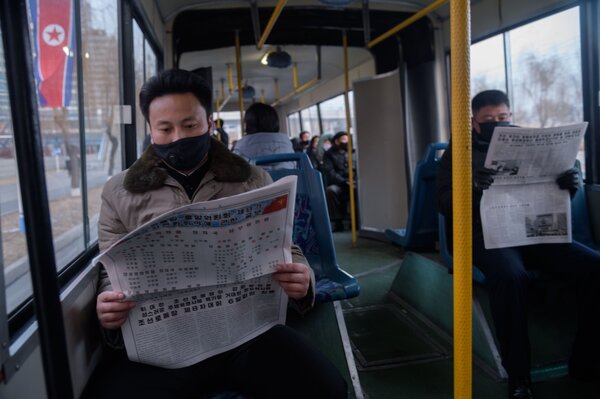 As President Trump’s term comes to a close, he is leaving behind a North Korea with a nuclear program that is more ambitious than ever, after touting his on-and-off diplomacy and “personal relationship” with Mr. Kim.

“It’s nuclear intimidation, nuclear blackmailing,” said Tae Yong-ho, a former North Korean diplomat in London who defected to South Korea, where he is now a lawmaker. “Kim Jong-un is suggesting that his country’s nuclear capabilities will grow ​by ​leaps and bounds hard to imagine if there is no breakthrough in negotiations with the Biden administration.”

Mr. Kim appears willing to negotiate with President-elect Joseph R. Biden’s incoming administration, but unlikely to seek ​talks on scrapping his nuclear weapons program. It is more likely that he will propose the kind of nuclear arms control ​negotiations the United States had with the former Soviet Union.​

In his lengthy policy review to the congress over the weekend, Mr. Kim called North Korea “a responsible nuclear weapons state” that would not use its arsenal unless it was first threatened with a nuclear weapon. Mr. Kim said he “never precludes diplomacy” but would use his growing nuclear force as powerful leverage that “guarantees its success.”

​Mr. Kim said his goal in negotiating with Washington was a “withdrawal of its hostile policy” toward the North, including an end to sanctions and to joint military exercises with South Korea, as well as other alliance activities around the Korean Peninsula. But Seoul and Washington say their military exercises are compelled by the North’s growing nuclear and missile threat.

“The North will continue its hard-line policy, will not denuclearize, will talk to the U.S. but on what Kim Jong-un perceives as an equal footing as a nuclear power,” David Maxwell, a senior fellow at the Washington-based Foundation for Defense of Democracies, ​said in an email.

It’s unclear whether and how fast North Korea can achieve the arms buildup goals set by Mr. Kim.​ But his ​raising of the stakes reflects the hard realities he faces as the country’s supreme leader.

For the decade he has been in power, ​Mr. Kim has had little besides his nuclear arsenal to use as leverage in negotiations with Washington and to show strength to his people.

On Sunday, delegates lauded Mr. Kim for turning their country “into a world military power” and elected him general secretary of the Workers’ Party, a new title created during the congress.

Mr. Kim appeared to offer no new vision for the North’s economy, reaffirming “self-reliance” and “self-sufficiency” as the “main seed and theme” of his economic policies​ for the coming years​. He mainly repeated his exhortations to increase all domestic industries’ output, to become less dependent on imports​ and allocate resources more efficiently, and to fight “​anti-socialist acts, ​abuse of power, bureaucracy, irregularities and corruption” among officials.

Under Mr. Kim, North Korea has conducted four of its six underground nuclear tests and flight-tested three intercontinental ballistic missiles. After the last of those missile tests, in 2017, Mr. Kim said North Korea was now capable of targeting the continental United States with nuclear missiles.

The United Nations Security Council responded with devastating sanctions, banning coal, iron ore, textiles, fisheries and ​all ​other major exports.​ Mr. Kim engaged in talks with Mr. Trump in 2018 after declaring a moratorium on nuclear and long-range ballistic missile tests. But his three meetings with the American leader ​failed to produce an agreement.

Mr. Kim later said that his country would slog through sanctions by building a “self-reliant” economy, and that he no longer felt bound by the moratorium. In a nighttime military parade held in Pyongyang, the capital, on Oct. 10, North Korea unveiled what appeared to be its biggest intercontinental ballistic missile yet, which has not been tested.

North Korea will likely wait to see if the Biden administration proposes dialogue, said Shin Beom-chul, an analyst at the Korea Research Institute for National Strategy in Seoul. If its expectations are not met, it will continue to negotiate through provocation, Mr. Shin said.

“The Biden team should be prepared for provocations and escalation in the first half of the year,” said Lee Sung-yoon, a professor of Korean studies at Tufts University. “It was almost preordained, and certainly Kim Jong-un’s been signaling escalation for the past year.”

While seeking to raise the pressure on Washington, Mr. Kim renewed his attempt to weaken the alliance between South Korea and the United States.

In a nationally televised speech on Monday, President Moon Jae-in of South Korea said he was not giving up on his efforts to revive the stalled talks between North Korea and the United States and between the two Koreas. He proposed that the North and South start with cooperation in fighting infectious diseases, including Covid-19.

Over the weekend, Mr. Kim called such cooperation “inessential” and said that if South Korea wanted to repair ties, it must “halt all hostile acts,” such as imports of American weapons and joint military exercises with the United States.

Mr. Kim’s deepening mistrust of Washington and Seoul was also reflected in the reshuffling of his party’s leadership during the congress. Officials who had led Mr. Kim’s diplomatic offensive toward Washington and Seoul were demoted. Among them were Kim Yo-jong, his sister, First Vice Foreign Minister Choe Son-hui and Kim Yong-chol, a former vice chairman of the party.

Ms. Kim issued a blistering statement on Wednesday in which she called the South Korean military “the idiot” for monitoring for signs of a military parade in Pyongyang during the party congress.

During the congress, Mr. Kim emphasized closer ties with China, with which he said his country was inseparably bound in “the struggle for common cause.” Although the pandemic shut down much of the official trade between the two Communist allies, American officials recently warned that China has continued to extend a lifeline to North Korea, despite the international sanctions.

North Korea’s deepening ties with China do not bode well for Washington, which is struggling to respond to an increasingly aggressive and influential Beijing.

“U.S.-China relations have deteriorated to the detriment of U.N. sanctions enforcement,” said Leif-Eric Easley, a professor of international studies at Ewha Womans University in Seoul. “So as the Biden administration comes to office, Kim continues to seek rather than offer external concessions.”