SINGAPORE – Resembling a sleek knee brace used by Batman in movie The Dark Knight Rises, a new aid called X-Brace offers a leg up to those who suffer from knee problems.

The lighter and more robust knee brace, which is targeted at the elderly, was developed in a collaboration between a local engineering firm, knee surgeons and 3D printing specialists from Nanyang Technological University (NTU).

Knee braces are typically prescribed to elderly patients to alleviate the burden on their joints, and assist patients who have undergone knee surgery – such as for torn ligaments.

Dr Jeffrey Chew, an orthopaedic surgeon at the Centre for Orthopaedics, noted that a common condition among elderly patients is knee osteoarthritis – “wear and tear” of the knee joints – which affects 40 per cent of people above 70.

“Knee osteoarthritis can significantly affect quality of life, causing daily pain, weakness and instability,” he said at a media preview of the knee brace on Wednesday (Dec 15).

Conventional knee braces weigh around 1kg and are designed to restrict one’s movement by preventing the knee from bending beyond a certain angle, Dr Chew noted.

“So we wanted to create a knee brace which is lighter – but also provides the patient with support when they move, especially for those who have difficulty standing up, walking or climbing stairs due to weak and painful knees,” he added.

The team eventually reduced the weight of the brace to around 720g – 30 per cent lighter than the traditional exoskeleton knee brace. It is made of plastic, instead of the typical metal orthopaedic braces that weigh more than 1kg.

The X-Brace includes a spring which provides a 3kg to 6kg lift to the user when standing or walking, said Mr Ong.

“The support given is twofold – on the one hand, (users) are given a lift which compensates for their lack of strength, and on the other hand, they’re also given the confidence to walk again, which helps them to recover faster,” he added.

The brace can be customised to each patient’s needs. 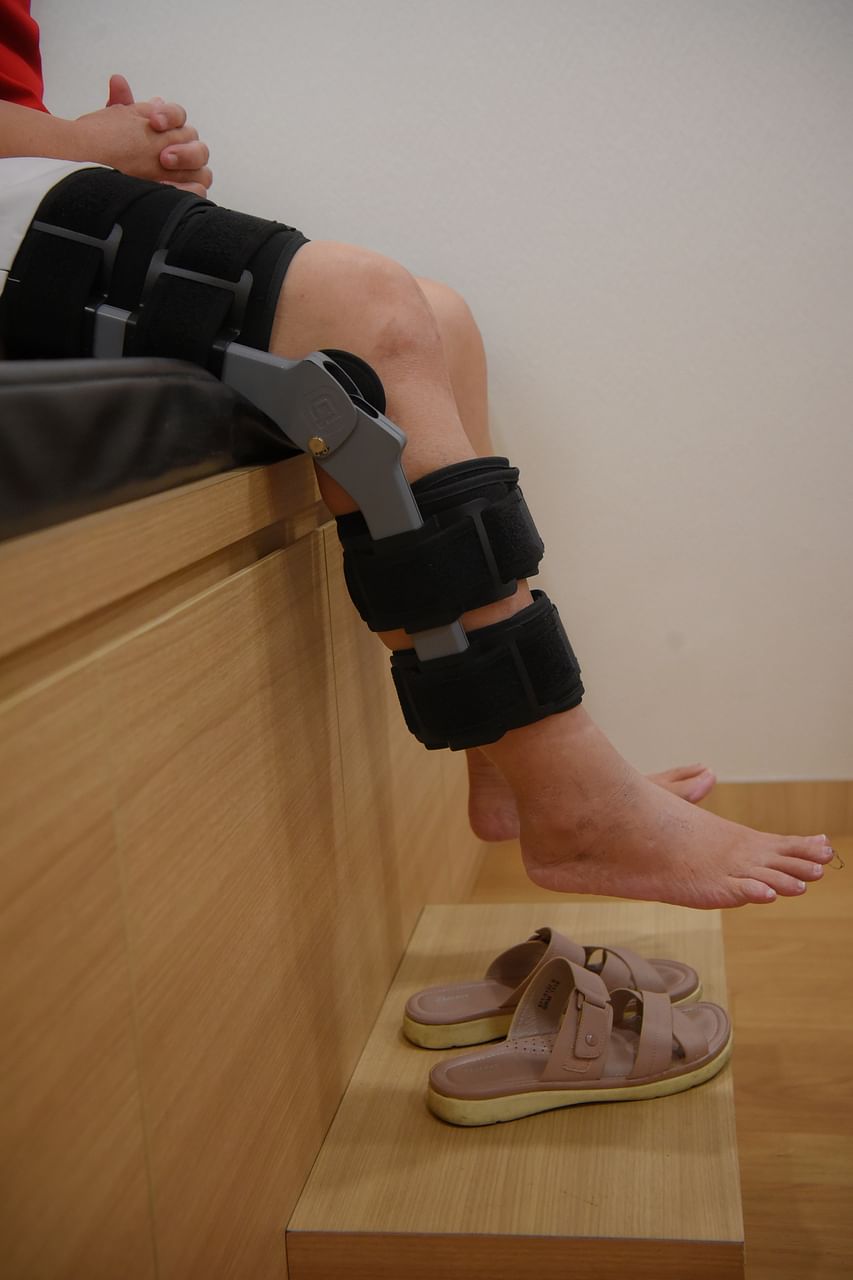 Dr Chew said: “The idea is to gradually wean the patient off the brace, so the doctor or physiotherapist can also adjust the strength of the brace when (the patient is) recovering.”

He added that Namic has supported more than 240 projects in the last six years, of which more than 60 are focused on healthcare .

NTU assistant professor Chan Wai Lee from the School of Mechanical and Aerospace Engineering, who is the principal investigator of this project, said 3D-modelling was heavily used to validate the various design ideas that led to the weight reduction in the brace.

Mr Joel Lim, a PhD student in Prof Chan’s team, led the design efforts in discussion with Delsson and 3D-printed the prototype for real-life validation tests.

“Light weight and strength are crucial to this project. We first analysed conventional knee braces and their current bill of material.

“We decided to change to a plastic material with an optimised structure… then designed new structures and joints that are strong enough to withstand the flex of the knee and still assist it to move in the correct direction,” said Mr Lim.

At least 10 people have tried the brace so far, one of whom is Madam Teo Lee Lee, 72, who has osteoarthritis and needed two knee replacements last year.

After surgery, her right leg was still very weak, and she had difficulty walking. None of the conventional knee braces worked for her, until she tried X-Brace.

“I feel a lot more confident walking with the brace, and have less difficulty standing up compared with before,” said the retiree.

The X-Brace is expected to be available on the market soon for $1,000 – equivalent to the cost of conventional knee braces – though the price may differ depending on the user’s needs.

The team is working on its next product iteration – to lower the weight of the brace to 600g by incorporating a sleeker design that can be worn under one’s clothes.

The new version will likely be launched in the first quarter of next year, said Mr Ong. “In the future, we hope to… come up with a smart knee brace – fitted with electronic sensors to measure quantitatively if the patient is improving,” he added.

Malaysia mulls compatibility quiz for couples who want to wed