Ryoko Kikuchi was strolling home from a Tokyo movie theater when she saw a cat the size of a yacht strutting high above the sidewalk, coyly licking its paws.

“The way it was meowing was too cute to bear,” she said.

A lot of people in Tokyo feel the same way, no matter that the cat is just a bunch of pixels on a billboard. The 4K display does not officially “open” until Monday, but it has already drawn socially distanced crowds — and inspired many social media posts — since its installation last month.

The digital calico behaves a bit like an actual cat, in the sense that it does whatever it pleases. Visitors are only treated to a few brief appearances per hour, in between a stream of advertisements and music videos.

The cat yawns here and there, and at 1 a.m. it drops off to sleep for about six hours, resting its head on white paws that hug the side of what appears to be an open-air perch near the Shinjuku subway station. (The three-dimensional look is an illusion created by a curved, 26-by-62-foot LED screen.)

It also talks, greeting pedestrians with “nyannichiwa.” That is a blend of “konnichiwa,” or hello, and “nyan,” Japanese for “meow.” 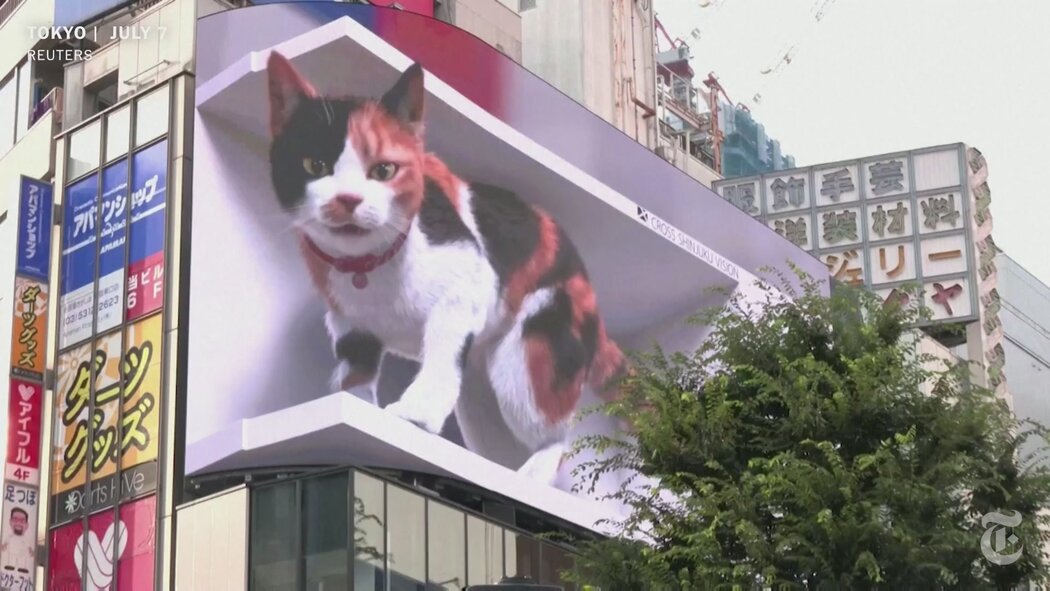 Unlike many of the flashing billboards and signs in the area, the cat isn’t advertising a specific product or brand.

Takayuki Ohkawa, a spokesman for the Japanese conglomerate Unika, one of the two companies running the feline display, said that the cat does not have an official name. (Fans have called it “Shinjuku east exit cat,” after the station.)

“There are many reasons we decided to display the cat, but one of the big reasons is that with corona, the world became very dark,” Mr. Ohkawa added, referring to the coronavirus pandemic. “Through the cat display, we wanted to revive Shinjuku and make it brighter.”

Officials in Tokyo reported 920 new Covid-19 infections on Wednesday, the city’s highest tally since mid-May. On Thursday, the Japanese government placed Tokyo under its fourth state of emergency since the start of the pandemic, weeks before the city is scheduled to host the Summer Olympics.

When one fan of the feline, Kenjiro Shimoda, stopped by Shinjuku station recently, he saw other people hanging around waiting to record multiple cat cameos. He could only stay long enough to see one, he said, but it was worth it.

“Its impact was more powerful than I thought,” said Mr. Shimoda, who works in marketing.

It isn’t the first three-dimensional billboard to delight pedestrians and social media users in East Asia. One last year in Seoul displayed a crashing wave. Another, in the southwestern Chinese city of Chengdu, showed a “Star Trek”-like spaceship that appeared to emerge from a building.

A video feed of the cat billboard is being livestreamed for those who can’t visit the Shinjuku area. Around lunchtime on Thursday, nearly 200 YouTube users were watching as the cat waved its tail and gazed at some aboveground subway cars.

Still, the cat’s human masters have acknowledged that the three-dimensional illusion isn’t nearly as pronounced on a live feed as in person.

Some people — even cat people — may also find that the Shinjuku east exit cat’s repertoire can begin to feel a little repetitive. Mr. Ohkawa said that new visuals may be introduced on Monday, but he declined to elaborate.

“You’ll just have to wait and see,” he said.