AUCKLAND, New Zealand — The Pacific island nation of Samoa hurtled toward a constitutional crisis on Saturday, when the country’s head of state announced that he was suspending Parliament just two days before it was scheduled to swear in the country’s first new prime minister in more than two decades.

In a single-page letter posted to Facebook, Va’aletoa Sualauvi II, Samoa’s appointed head of state, announced that Parliament would be suspended “until such time as to be announced and for reasons that I will make known in due course.”

Samoa’s Parliament had been scheduled to officially reopen on Monday, fulfilling a constitutional requirement to convene within a 45-day window of the April 9 election. Fiame Naomi Mata’afa, the leader of the newcomer party FAST, was to be sworn in as prime minister, ending Prime Minister Tuilaepa Aiono Sailele Malielegaoi’s 22-year tenure.

Speaking by phone from Samoa early Sunday, Ms. Mata’afa said the proclamation was an attempt to prevent her party from taking power. “This is a coup,” she said. Mr. Tuilaepa could not be reached for comment.

Ms. Mata’afa and her party, which campaigned on a platform of upholding the rule of law, have not yet given up hope of a legal resolution. Anticipating a roadblock before the proclamation was issued, the party’s lawyers had prepared paperwork to challenge it. They want the country’s Supreme Court to issue a ruling that would allow Parliament to convene on Monday as scheduled.

“They’re going to have a meeting with the chief justice tomorrow,” Ms. Mata’afa said. “We’ll be filing for the revoking of this new proclamation.”

It is unclear whether Mr. Sualauvi, whose role is ordinarily ceremonial, has the legal authority to suspend Parliament indefinitely or prevent it from meeting within the 45 day window.

The latest uproar comes after weeks of breakneck events. A surprise dead heat in the electoral contest resulted in more than 20 legal challenges, including an attempt to block Ms. Mata’afa’s appointment by using a law meant to ensure that more women serve in Parliament.

To comply with the law, Mr. Tuilaepa had argued, Parliament needed to add another seat, appointing an additional woman from his party, an act that would have given his party enough seats to hold onto the premiership. The argument and a call for a second election were ultimately rejected by the courts.

Elections in Samoa, a country of 200,000 people, are not generally so explosive. Over the past four decades, Mr. Tuilaepa’s Human Rights Protection Party has consistently won a comfortable majority, helped by legal changes that have made dissent increasingly difficult and have blocked fledgling opposition parties from gaining traction. 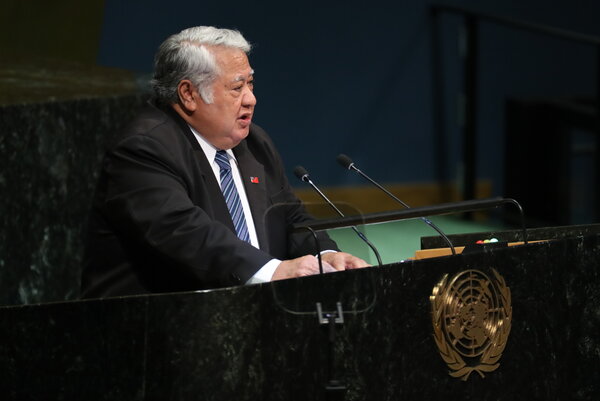 But this year has been different. Three highly divisive bills that were widely seen as overreach on the part of the government led to Ms. Mata’afa’s defection from the Human Rights Protection Party last year.

A seasoned and well-liked politician, Ms. Mata’afa has been in politics for more than 30 years and is the daughter of Samoa’s first prime minister. Her defection to FAST helped propel it to electoral success, eventually inspiring an influential independent candidate to throw his weight behind the party, breaking a tie.

“Everything about this election — people have talked about it being unprecedented, but now we’re entering a truly unprecedented state,” said Kerryn Baker, an expert on the region at the Australian National University. “Things could be sorted out through alternate channels, but we’re essentially beyond the Constitution now.”

Mr. Tuilaepa has made it clear that he will not vacate his position without a fight. Despite Ms. Mata’afa’s party holding 26 of the 51 available seats, Mr. Tuilaepa and his party had rejected multiple calls to concede.

“They do not want to relinquish power,” said Patricia O’Brien, an expert on autocracy in the Pacific at the Australian National University. “Before, it was a veneer of democracy, but now, this is real democracy in action — where power has to be relinquished and where the voice of the people is not to Tuilaepa’s liking. He’s not doing what he should be doing, and that’s conceding.”

Addressing the country in a live Facebook broadcast late Saturday, a serene but tired-looking Ms. Mata’afa urged Samoans to keep the peace. “We just need to try and find a rational way to get through this, and keep people calm,” she said afterward. “There are still some sensible people around, and we can work through this.”

But she acknowledged that Mr. Tuilaepa and his supporters could still resist the transition of power: “We had been expecting that some other effort would be made, and I expect even more to come along.”