HONG KONG — Squeezed tightly between two megacities with a combined population of 20 million are some of East Asia’s most important wetlands, where rare birds sing out amid traditional shrimp ponds.

Look up, and looming right above this rustic setting are the crush of skyscrapers in Shenzhen, China, almost close enough to touch. Just out of view behind some hills to the south are the congested streets of Kowloon and Hong Kong Island.

But in this corner of northwest Hong Kong, tens of thousands of cormorants, herons, egrets, sandpipers and other birds, including endangered species like the black-faced spoonbill, gather each winter to feed on the mud flats. Eucalyptus trees line a path that cuts along the shrimp and fishponds, where small restaurants serve up the day’s harvest.

For bird watchers, bike riders and day-trippers from Hong Kong, the wetlands offer welcome respite from the city’s crowds, even if the sound of birdcalls is regularly interrupted by the clank of hammers and the beep-beep of reversing vehicles from an industrial district nearby.

But in a place where land prices are among the most expensive in the world, shopping malls and apartment blocks are far more profitable than shellfish, and the area is increasingly attractive to developers.

“In a few years, this will all be housing,” said Yip Ka-kit, 32, as he took a break from riding his bicycle around Nam Sang Wai, a 400-acre wedge of the wetlands bounded by two rivers and filled with fish ponds and reed beds. “People in Hong Kong only care about the economy.”

Signs warning of the punishment for arson — up to life in prison — hang prominently in the wetlands, a reminder of one of their most imminent threats: fire. A series of blazes this spring scorched parts of Nam Sang Wai.

It is not the first time suspicious fires have burned in the area, which environmentalists and officials believe may have been set to undermine its ecological value. 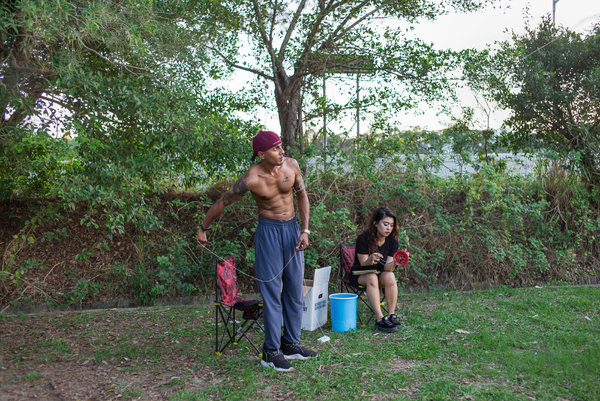 Police say they are investigating, but have arrested no suspects. Last year during a public hearing, a representative of a company that has applied to develop the area denied it had any role in the blazes.

“There has been a longtime struggle between the landowners and preservationists about the future of that piece of wetland,” said Eddie Chu, a member of the Hong Kong Legislative Council who represents the area and has called for protection of Nam Sang Wai.

Seen from above, the wetlands look like a net, with thin bands of land looping around blue blocks of water.

For centuries, rice paddies filled the area. Then beginning in the 1940s, the people who worked this land, many of them refugees from war and political chaos in China, turned the paddies into fishponds that earned far more than rice.

For decades, landowners have sought to develop the area, only to be rebuffed by the courts and government agencies. Last year the local planning board rejected the most recent proposal from a developer because of concerns about the potential loss of wetlands. The developer said it would appeal.

The total size of the wetlands area is about 4,350 acres, equivalent to five of Manhattan’s Central Park. Part of the wetlands are off limits to large-scale development, including the Mai Po Nature Reserve, which is protected under the Ramsar Convention, an international treaty for the conservation of wetlands.

The reserve includes traditional shrimp farming ponds that have largely disappeared from the rest of China. The ponds, known as gei wai, make use of the tides to suck in young shrimp from Deep Bay. The ponds are then closed off, allowing the shrimp to grow in protected lagoons, until they are harvested by draining the water during an ebb tide.

The World Wide Fund for Nature in Hong Kong operates 21 gei wai in the reserve. The shrimp are harvested at night.

One night several pounds of shrimp were netted as a group of environment officials from mainland China watched and later dined on the shrimp, which were accompanied by soy sauce, chili peppers and beers.

“When we harvest there are small fish and shrimp we don’t want, and the birds come and eat,” said Wen Xianji, assistant director of the Mai Po reserve. “This traditional way of aquaculture benefits both humans and birds.”

The nature reserve has the added protection of its location along Hong Kong’s border with Shenzhen, where permits limit entry from the Hong Kong side, and a 15-foot fence topped with barbed wire blocks people from crossing from the mainland.

But other areas nearby, like Nam Sang Wai, have less concrete protections.

The most recent development proposal in Nam Sang Wai would have included apartments for 6,500 people.

The developer, a joint venture between a family that has long owned the land and Henderson Land Development, a large Hong Kong property company, said it would follow a model like the London Wetland Center, which included a residential development that financed a habitat preservation project.

The proposed development itself would take up less than 10 percent of Nam Sang Wai’s 400 acres, with the remainder preserved as managed wetlands, its backers say.

Environmental groups, however, oppose the plan.

“So far from what we’ve seen the scale of development is not compatible with the area,” said Woo Ming-chuan, conservation officer for the Hong Kong Bird Watching Society. “It’s quite sensitive and unique, and they want to build residential towers.”

Ms. Woo said she believed any plan that sacrifices some of the wetlands would only encourage further encroachment.

“We are afraid that once approved it will be a precedent for similar applications in the future,” she said.

For now, the area remains a popular weekend destination for walkers, cyclists and nature lovers, with the entrance to the wetlands a short walk from a shopping mall that sits atop a rail station.

A short sampan ride takes visitors across an eddy of the Shan Pui River. The captain can often be found sleeping on the boat, waiting for passengers to board the small wooden craft, with a maximum capacity of seven. It is the only ferry in Hong Kong that traverses a river and the only one human-powered.

Among people who visit the area, the fear is that the forces of development will eventually win out.

“Of course I want them to preserve this place,” said Mr. Yip, the cyclist. “If they fill in everywhere in Hong Kong with houses, there will be nothing left to do here.”