MEHTARLAM, Afghanistan — Ammunition was depleted inside the bedraggled outposts in Laghman Province. Food was scarce. Some police officers hadn’t been paid in five months.

Then, just as American troops began leaving the country in early May, Taliban fighters besieged seven rural Afghan military outposts across the wheat fields and onion patches of the province, in eastern Afghanistan.

The insurgents enlisted village elders to visit the outposts bearing a message: Surrender or die.

By mid-month, security forces had surrendered all seven outposts after extended negotiations, according to village elders. At least 120 soldiers and police were given safe passage to the government-held provincial center in return for handing over weapons and equipment.

“We told them, ‘Look, your situation is bad — reinforcements aren’t coming,’” said Nabi Sarwar Khadim, 53, one of several elders who negotiated the surrenders.

Since May 1, at least 26 outposts and bases in just four provinces — Laghman, Baghlan, Wardak and Ghazni — have surrendered after such negotiations, according to village elders and government officials. With morale diving as American troops leave, and the Taliban seizing on each surrender as a propaganda victory, each collapse feeds the next in the Afghan countryside.

Among the negotiated surrenders were four district centers, which house local governors, police and intelligence chiefs — effectively handing the government facilities to Taliban control and scattering the officials there, at least temporarily. 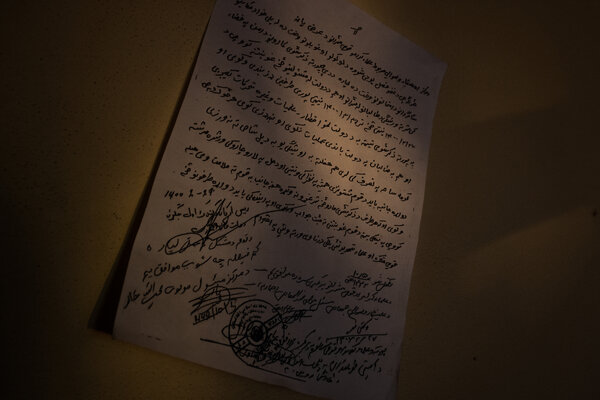 The Taliban have negotiated Afghan troop surrenders in the past, but never at the scale and pace of the base collapses this month in the four provinces extending east, north and west of Kabul. The tactic has removed hundreds of government forces from the battlefield, secured strategic territory and reaped weapons, ammunition and vehicles for the Taliban — often without firing a shot.

The base collapses are one measure of the rapidly deteriorating government war effort as one outpost after another falls, sometimes after battles, but often after wholesale surrenders.

The surrenders are part of a broader Taliban playbook of seizing and holding territory as security force morale plummets with the exit of international troops. Buyoffs of local police and militia. Local cease-fires that allow the Taliban to consolidate gains. A sustained military offensive despite pleas for peace talks and a nationwide cease-fire.

“The government is not able to save the security forces,” said Mohammed Jalal, a village elder in Baghlan Province. “If they fight, they will be killed, so they have to surrender.”

The surrenders are the work of Taliban Invitation and Guidance Committees, which intervene after insurgents cut off roads and supplies to surrounded outposts. Committee leaders or Taliban military leaders phone base commanders — and sometimes their families — and offer to spare troops’ lives if they surrender their outposts, weapons and ammunition.

In several cases, the committees have given surrendering troops money — typically around $130 — and civilian clothes and sent them home unharmed. But first they videotape the men as they promise not to rejoin the security forces. They log their phone numbers and the names of family members — and vow to kill the men if they rejoin the military.

“The Taliban commander and the Invitation and Guidance Committee called me more than 10 times and asked me to surrender,” said Maj. Imam Shah Zafari, 34, a district police chief in Wardak Province who surrendered his command center and weapons on May 11 after negotiations mediated by local elders.

After the Taliban provided a car ride home to Kabul, he said, a committee member phoned to assure him that the government would not imprison him for surrendering. “He said, ‘We have so much power in the government and we can release you,’” Major Zafari said.

The current conflict is really dozens of local wars. These are intimate struggles, where brothers and cousins battle one another and commanders on each side cajole, threaten and negotiate by cellphone.

“A Taliban commander calls me all the time, trying to destroy my morale, so that I’ll surrender,” said Wahidullah Zindani, 36, a bearded, sunburned police commander who has rejected Taliban demands to surrender his nine-man, bullet-pocked outpost in Laghman Province.

The negotiated surrenders are part of a broader offensive in which the Taliban have surrounded at least five provincial capitals this spring, according to a Pentagon inspector general report released May 18. The offensive has intensified since the American withdrawal began May 1. The Taliban have used their control of several major highways to cut off bases and garrisons, leaving them vulnerable.

The surrenders have a profound psychological effect.

“They call and say the Taliban are powerful enough to defeat the U.S. and they can easily take Laghman Province, so you should remember this before we kill you,” Rahmatullah Yarmal, Laghman’s 29-year-old governor, said of the Taliban committees during an interview inside his barricaded compound in Mehtarlam, the provincial capital.

It’s an effective propaganda tactic, the governor conceded — so effective that some outpost commanders now refuse to speak to elders or Taliban negotiators. He said many elders were not neutral peacemakers, but handpicked Taliban supporters.

Mr. Yarmal said 60 police officers who surrendered and took refuge in his government center are now primed to fight to retake the seven lost outposts. “I think we’ll have them back in a month,” he said.

But just hours after the governor spoke on May 19, a nearby district center, Dawlat Shah, surrendered without any resistance after negotiations. By the next morning, five more outposts had surrendered the same way in the district of Alishing, also in Laghman, district officials said.

Those Taliban victories were facilitated, in part, by a 30-day cease-fire negotiated by elders on May 17 in the heavily contested district of Alingar, allowing the Taliban to shift resources to the Alishing, where they forced the negotiated surrender of the five outposts just two days later. (On May 21, the Taliban violated the cease-fire with renewed attacks in Alingar, Mr. Khadim said).

The series of base collapses represented the second wholesale surrender in a Laghman district in two weeks. On May 7, three outposts and a military base collapsed the same way without a fight, said Nasir Ahmad Himat, the Alingar district governor.

“The soldiers simply dropped their weapons, got in their vehicles and went to the district center or provincial capital,” said Faqirullah, a village elder who goes by one name.

As Taliban fighters advanced on the provincial capital Sunday, Governor Yarmal announced that 110 security force members who had surrendered, and several commanders who were supposed to supervise them, had been detained for negligence.

Also Sunday, the Afghan military announced that troop reinforcements and the military chief of staff had rushed to Laghman to try to repel the Taliban assault.

In Ghazni Province, Hasan Reza Yousofi, a provincial councilman, said he begged officials to send reinforcements to an outpost and a military base that ultimately fell to the Taliban this month. He played a recorded phone call from a police officer, Abdul Ahmad, who said his ammunition was gone and his men were drinking rainwater because the base water tower had been destroyed by a rocket.

“We have been sold out — we make calls for reinforcements, but officials don’t help,” the recorded voice said. “The Taliban sent us tribal elders who said, ‘Surrender, you are sold out, no one will help you.’”

Mr. Yousofi said he did not know whether Mr. Ahmad survived after his outpost fell.

In Laghman Province, negotiations leading to the surrender of the seven outposts stretched over 10 days. Mr. Khadim, the village elder, said different elders negotiated with commanders of each outpost.

“We guaranteed they would not be killed,” he said. “There was nothing written, just our word.”

A few miles away, Commander Zindani refused to surrender his forlorn outpost near the front line. He said officers who had negotiated surrenders at three nearby outposts had betrayed their country.

One of his men, Muhammad Agha Bambard, said he would fight to avenge the deaths of two brothers he said were killed by the Taliban. He would never surrender, he said.

Commander Zindani’s nine men were down to a machine gun, a rocket-propelled grenade launcher and one AK-47 rifle each inside a ramshackle outpost with bloodstained walls. But he said he intended to fight on — as he told the Taliban commander who regularly phoned to demand his surrender.

“I told him, ‘I’m a soldier of my country,’” the commander said. “I am not here to surrender.”

Four days later, on Sunday, the outpost was overrun during a firefight with the Taliban, a member of the provincial council said. One police officer was shot dead and Commander Zindani and his outgunned men were taken prisoner.

A few hours later, the Taliban released a video showing Mr. Bambard being questioned by a Taliban commander as he lay on mattress, his face and neck bandaged. In a mocking tone, the commander asked why Mr. Bambard had posted on his Facebook page that he would not let the enemy capture his outpost while he was alive.

The wounded officer responded, “This is Afghanistan.”

Be prepared for the long haul on Covid-19: Foreign Minister Vivian Balakrishnan

How a sanctions-busting smartphone business thrives in North Korea