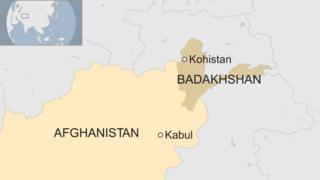 At least 30 people have been killed in the collapse of a gold mine in north-eastern Afghanistan, officials say.

The collapse occurred in the Kohistan district of Badakhshan province.

Villagers had reportedly dug a 60m (220ft) deep but makeshift shaft in a river bed to hunt for gold and were caught in its collapse.

Afghanistan has vast resources of minerals but many of the mines are old and poorly maintained, creating severe safety issues.

Villagers were reportedly using an excavator at the site when the mine collapsed.

At least seven other people were injured, officials say.

Nik Mohammad Nazari, spokesman for the provincial governor, told Agence France-Presse: “The villagers have been involved in this business for decades with no government control over them.

“We have sent a rescue team to the area, but villagers have already started removing bodies from the site.”

A spokesman for the National Disaster Management Authority told AFP the families of the dead would receive 50,000 afghanis ($660; £520).

Afghanistan’s vast resources remain largely untapped due to the conflict with the Taliban.

The conflict has seen the rise in illegal mining both by villagers and Taliban fighters who use it as a key source of revenue.

One Village Quelled the Virus. The Next Was Overrun. It’s a Bad Sign for India.