KABUL, Afghanistan — Elections in Afghanistan have become increasingly chaotic spectacles since the country’s first presidential vote in 2004. Each has proved more corrupt and compromised than the last, calling into question whether ambitions for a Western-style democracy can survive in a country consumed by war.

Now, Afghanistan is lurching again toward what is likely to be a violent and bitterly disputed presidential vote on Saturday. The Taliban have promised widespread violence to disrupt the election, political factions are digging in for a protracted fight, and voters are expressing contempt for politicians and the election process itself.

“It isn’t worth risking my life for a fraudulent election,” said Farkhunda Ahmadi, 25, a university student in Kabul, the Afghan capital. “There are no good candidates — we have to choose between the bad and the worst.”

Twice delayed, the election was not widely expected to happen at all because it was shunted aside by peace talks between the United States and the Taliban. But when President Trump called off the talks on Sept. 7, candidates scrambled to mount campaigns for an election that suddenly was going ahead despite its rushed nature and security concerns that are expected to keep most Afghans away from the polls.

Some Afghan public figures — including former President Hamid Karzai and other critics of the incumbent president, Ashraf Ghani — have warned for months that the elections could prove more destabilizing than unifying. They accuse Mr. Ghani, who is running for a second five-year term, of pushing ahead with a vote that will create an illegitimate government because of fraud and irregularities.

Western officials, too, have expressed concerns in private about the election’s legitimacy, but in public have usually supported the government’s insistence that even a compromised vote is better than none. Afghan officials point out that elections so far have managed to transfer power without coups or major factional violence, and so are demonstrably better than the alternatives. 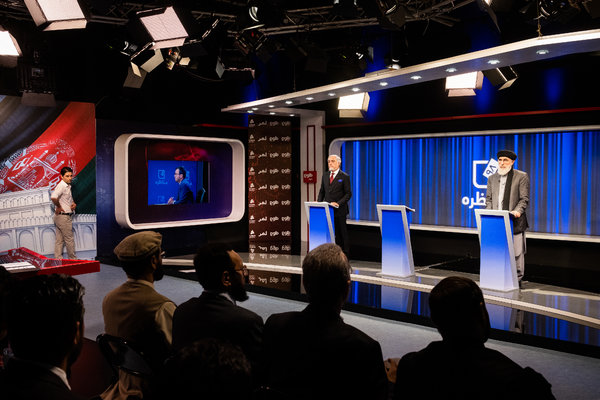 But there is little disagreement that Afghan elections have become more compromised over the years.

After the initial euphoria of elections in 2004, voter turnout has dropped in every election since — from 84 percent in 2004, to 39 percent in 2009 and 2014, to about 35 percent in 2018, according to international observers. Those are estimates because of the extent of vote-buying and ballot-stuffing, officials said.

There will be informal international observers on Saturday, but no international body will formally declare whether the election was free and fair.

Just days before the vote, officials were still hiring and training nearly 200,000 election workers. Hundreds of voting sites have been shut down for what officials said were security reasons. And many Afghan men were infuriated by a new rule requiring women to remove head and face coverings for ID photographs before voting.

Afghanistan’s last presidential election, in 2014, was so stained by corruption, squabbling and fraud complaints that then-Secretary of State John Kerry stepped in to mediate a strained political marriage between the two top candidates, Mr. Ghani and Chief Executive Abdullah Abdullah — the leading candidates in this vote, as well. Last October, parliamentary elections descended into chaos amid shouting matches and cries of ballot-stuffing and political payoffs.

A council of more than a dozen candidates — not including Mr. Ghani or Mr. Abdullah — declared the election commission incapable of holding a fair election. The candidates, citing “terrible security,” said there probably would not be enough voters Saturday to hold “an acceptable election.” (In a sign of how messy Afghan politics are, several of those candidates dropped out in favor of Mr. Ghani after joining in that statement.)

The election process itself is so convoluted that preliminary results will not be tallied until at least Oct. 17 and final results until at least Nov. 7. That gives candidates plenty of time to publish their own inflated results via popular mobile apps, challenging election officials to prove them wrong.

“I believe the election will be full of chaos,” said Mohammad Nadir Mamar, a political analyst in Kabul. He, and many others, are worried that the vote could even lead to civil unrest.

Mohammad Umer Daudzai, Mr. Ghani’s campaign chief, stressed at a news conference at the end of campaigning on Wednesday that the president’s campaign had played by the rules. Mr. Daudzai said that the election commission had penalized both Mr. Ghani’s ticket and Mr. Abdullah’s for use of government resources and presence of government officials at rallies.

“There were fines, and those fines have been fulfilled,” Mr. Daudzai said.

Others are responding to the election with ridicule, grass-roots activism, or both.

Jamil Karzai’s political party has registered nearly 12,000 of the 23,000 election observers assigned by parties to monitor voting sites. But he is not running for president. Nor is anyone in his 3,000-member party. He says he does not even plan to vote on Saturday.

But Mr. Karzai does plan to deploy his observers — he says they are unpaid volunteers — to expose what he considers a corrupt and easily manipulated election. They will try to reach many of the roughly 5,000 polling centers Saturday to sniff out fraud, deception or payoffs.

By law, such observers — indeed all citizens — may file formal complaints with the country’s Independent Electoral Complaints Commission. And by flooding the commission with complaints or demanding recounts, Mr. Karzai said, they can force a reckoning.

“The system is broken — it’s corrupt,” he said inside the cramped Kabul office of his Afghanistan Moderate Party. “There is no intention to have a fair election.”

Mr. Karzai’s machinations underline the fragility and vulnerability of a system that encourages losers to cry foul, and thus paralyze the process, as happened in the 2014 presidential vote.

This week, the Election Support Group, a committee of international donors in Kabul, noted candidates’ concerns “about the level playing field and the improper use of state resources to influence and/or co-opt voters, which erode public confidence.”

On social media, supporters of Mr. Ghani and Mr. Abdullah spar with skeptics who say the election is corrupt, or irredeemably compromised given the widespread threat of Taliban violence that will keep many potential voters home.

The election commission says it has installed new safeguards, among them 39,000 hand-held biometric devices and 10 color-coded copies of paper tally sheets. The devices will record voters’ fingerprints and photos, and also scan bar codes on registration stickers affixed to national ID cards, known as tazkera.

But many voting centers are in areas contested by the Taliban. The militants have made good on threats to attack election events; Mr. Ghani escaped injury during a Taliban suicide bombing at a rally in Parwan Province that killed 26 people on Sept. 17.

Until the past couple weeks, candidates had held few events outside Kabul, for fear of attacks. Early on, Mr. Ghani was mostly campaigning in the provinces by holding “virtual rallies” via video chat from Kabul.

The Taliban have said that any Afghans killed by the militants at an election event are at fault for putting themselves in harm’s way despite warnings. The group has said that anyone caught with a voter registration sticker on a tazkera will be punished.

In this atmosphere, vote-rigging and ballot-stuffing can flourish in lawless areas, Mr. Karzai said.

“You can easily manipulate data transfers to make 1,000 votes look like 10,000,” he said, citing underpaid election workers susceptible to bribery and intimidation. “Why should we put ourselves and our children in danger for a system that has lost the faith of the people?”

Aziz Ibrahimi, spokesman for Afghanistan’s Independent Election Commission, said that Mr. Karzai can file all the complaints he wants, but that the complaints commission would determine whether they have merit.

“It’s very obvious what he’s trying to do,” Mr. Ibrahimi said. “If he doesn’t have strong evidence, the commission will throw out his complaints if it is clear he is just trying to sabotage the process.”

The government has said that 72,000 security forces will be deployed nationwide Saturday. About 2,000 voting centers were shut down in August, and more than 400 more this month, for security reasons. In only four of the country’s 34 provinces are all of the assigned voting centers still scheduled to open.

There are 9.6 million registered voters in a country of about 35 million people, though many Afghans have challenged that number, saying the registration process was rigged during last year’s election. Roughly one-third of voters are women, who must vote separately from men and frequently face resistance from husbands or fathers opposed to women’s voting at all.

How to stay sprightly in your 40s