Home » Asia » Afghans Wonder ‘What About Me?’ as U.S. Troops Prepare to Withdraw

KABUL, Afghanistan — A female high school student in Kabul, Afghanistan’s war-scarred capital, is worried that she won’t be allowed to graduate. A pomegranate farmer in Kandahar wonders if his orchards will ever be clear of Taliban land mines. A government soldier in Ghazni fears he will never stop fighting.

Three Afghans from disparate walks of life, now each asking the same question: What will become of me when the Americans leave?

President Biden on Tuesday vowed to withdraw all American troops by Sept. 11, nearly 20 years after the first Americans arrived to drive out Al Qaeda following the 2001 terrorist attacks. The American withdrawal ends the longest war in United States history, but it is also likely to be the start of another difficult chapter for Afghanistan’s people.

“I am so worried about my future. It seems so murky. If the Taliban take over, I lose my identity,” said Wahida Sadeqi, 17, an 11th grader at Pardis High School in Kabul. “It is about my existence. It is not about their withdrawal. I was born in 2004 and I have no idea what the Taliban did to women, but I know women were banned from everything.”

Uncertainty hangs over virtually every facet of life in Afghanistan. It is unclear what the future holds and if the fighting will ever stop. For two decades, American leaders have pledged peace, prosperity, democracy, the end of terrorism and rights for women. Few of those promises have materialized in vast areas of Afghanistan, but now even in the cities where real progress occurred, there is fear that everything will be lost when the Americans leave.

The Taliban, the extremist group that once controlled most of the country and continues to fight the government, insist that the elected president step down. Militias are increasing in prominence and power, and there is talk of civil war after the U.S. withdrawal.

Afghans watched with cautious optimism when Mr. Biden assumed office in January. Many had hoped he would reverse the Trump administration’s rushed pledge to withdraw all U.S. troops by May after brokering a shaky peace deal with the Taliban last year.

Afghan leaders were convinced that the new American president would be a better ally, who would not immediately withdraw the troops that have helped keep the Taliban at bay and out of major cities.

Since the Afghan government and the Taliban began peace talks in Qatar late last year, fighting between them has surged, along with civilian casualties. On Wednesday, the United Nations’ mission in Afghanistan reported that in the first three months of the year there were 573 civilians killed and 1,210 wounded, a 29 percent increase over the same period in 2020. More than 40,000 civilians have been killed since the start of the war. 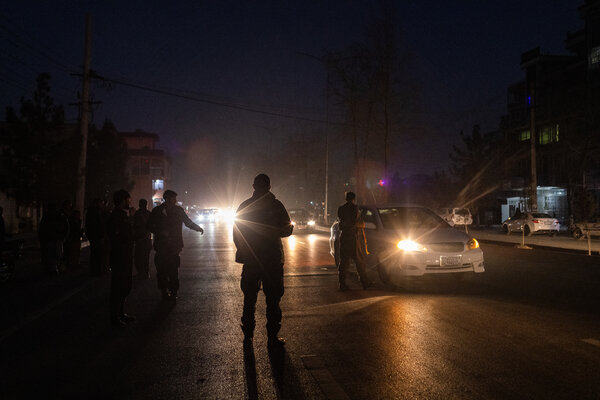 Over two decades, the American mission evolved from hunting terrorists to helping the government build the institutions of a functioning government, dismantle the Taliban and empower women. But the U.S. and Afghan militaries were never able to effectively destroy the Taliban, allowing the insurgents to stage a comeback.

The Taliban never recognized Afghanistan’s democratic government. And they appear closer than ever to achieving the goal of their insurgency: to return to power and establish a government based on their extremist view of Islam.

Women would be most at risk under Taliban rule. When the group controlled Afghanistan from 1996 to 2001, it banned women from taking most jobs or receiving educations and practically made them prisoners in their own homes.

“It is too early to comment on the subject. We need to know much more,” said Fatima Gailani, an Afghan government negotiator who is involved in the continuing peace talks with the Taliban. “One thing is certain: It is about time that we learn how to rely on ourselves. Women of Afghanistan are totally different now. They are a force in our country; no one can deny them their rights or status.”

Afghanistan’s shaky democracy — propped up by billions of American dollars — has given way to an educated urban class that includes women like Ms. Gailani. Many of them were born in Afghanistan in the 1990s and came of age during the U.S. occupation of the country. Now these women are journalists, part of civil society and members of government.

In the countryside, by contrast, fighting, poverty and oppression remain regular parts of life. Despite the challenges, residents found some comfort in knowing that Afghan forces, backed by the American military, were keeping the peace at least in some areas.

Haji Abdul Samad, 52, a pomegranate farmer from the Arghandab district of Kandahar Province, has been displaced from his home for two months because of the heavy fighting there.

“I am too tired of my life. We are now in a position to beg,” Mr. Samad said. “The Americans are responsible for the troubles, hardships that we are going through. Now they are going to leave with their troops, with no peace, no progress. They just want to leave their war behind.”

Fears about the future are as palpable in the presidential palace in Kabul as they are in far-flung corners of the country. And people across Afghanistan are confused about who will soon be in charge.

The Taliban have repeatedly called for President Ashraf Ghani to step down to make way for an interim government, or most likely, their own. Mr. Ghani has refused, instead pushing for elections but also opening the door to more fighting and a potential civil war. The peace talks in Qatar have faltered and the Taliban have all but backed out of proposed talks in Turkey.

“Ghani will be increasingly isolated. Power brokers see every one of his moves as designed to keep himself and his deputies at the helm,” said Torek Farhadi, an adviser to former President Hamid Karzai. “Reality is, free and fair elections are not possible in the country amid war. In fact, it could fuel more violence.”

As American troops prepare to leave and fractures form in the Afghan government, militias controlled by powerful local warlords are once more rising to prominence and attacking government forces.

The American withdrawal will undoubtedly be a massive blow to morale for the Afghan security forces, spread across the country at hundreds of checkpoints, inside bases and along violent front lines. For years, the U.S. presence has meant that American air power, if needed, was nearby. But since the Trump administration’s deal with the Taliban, those airstrikes have become much less frequent, occurring only in the most dire of situations.

Without American military support, Afghan government troops are up against a Taliban enemy who is frequently more experienced and better equipped than the average foot soldier.

The history of Afghanistan has been one of foreign invasion and withdrawal: the British in the 19th century and the Soviets in the 20th. After each invasion, the country underwent a period of infighting and civil war.

“It is not the right time to withdraw their troops,” said Major Saifuddin Azizi, a commando commander in the southeastern province of Ghazni, where fighting has been especially brutal in recent days. “It is unreasonable, hasty and a betrayal to us. It pushes Afghanistan into another civil war. Afghanistan’s destiny will look like it did two decades ago.”

Reporting was contributed by Fahim Abed, Najim Rahim and Fatima Faizi from Kabul, and Taimoor Shah from Kandahar.