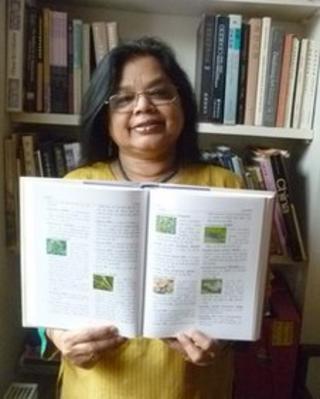 A linguistics professor based in Britain has compiled the first dictionary of four endangered tribal languages used in the Andaman Islands.

Experts say that it contains words from some of the oldest languages in the world, which are “crying out for concerted documentation”.

Tribal people in the Andamans are thought to originate from Africa.

The islands off the southern tip of India are often called an “anthropologist’s dream” and are one of the most linguistically diverse areas of the world.

At least two of the languages in Prof Abbi’s Great Andamanese Language dictionary are now extinct.

Professor Abbi, a Leverhulme professor at the School of Oriental and African Studies (Soas) in London, told the BBC that she felt compelled to compile the dictionary because the Andamanese people represent one of the oldest civilisations of the world.

“This was my way of documenting ancient and traditional knowledge as words are cultural, archaeological, and environmental signatures of a community,” she said.

Two other languages in it – Jeru and Sare – are spoken by only a handful of people.

The last speaker of the ancient Bo language died last year at the age of about 85.

Professor Abbi says that no-one knows the origins of the Bo, Khora, Jeru and Sare languages.

Her work has been fulsomely welcomed by fellow academics – including the Soas Director of Endangered Languages Academic Programme Peter Austin – as “an outstanding labour of love” with detailed translations in English and Hindi.

Experts say that the information contained in the dictionary is of great value not just to linguists and anthropologists, but also to scientists wanting to research natural phenomena in one of the world’s most ecologically diverse areas.

Anthropologists have divided Andamanese tribes into four major groups, the Great Andamanese, the Jarawa, the Onge and the Sentinelese.

Professor Abbi says that all apart from the Sentinelese have come into contact with “mainlanders” from India and have suffered from “imported illnesses”.

“It remains my dream also to compile a Sentinelese dictionary, but they are extremely defensive and fire arrows if anyone approaches their island,” she said.

Fire at Woodlands Checkpoint from burning motorcycle, no injuries reported