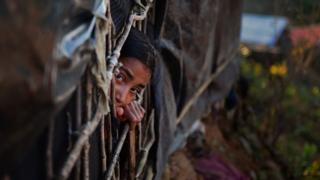 Uncertainty over whether Bangladesh will start sending Rohingya refugees back to Myanmar has caused fear and confusion in refugee camps.

Authorities had said they planned to move the first group on Thursday but it is unclear whether they will go ahead.

The UN and rights groups have said no-one should be forced to return, as the situation in Myanmar is not safe.

More than 700,000 Rohingya Muslims and others have fled to Bangladesh over the past year.

They were escaping violence and a military operation in western Rakhine state.

The UN has said senior Myanmar officials should be investigated and tried for genocide over the operation, which the army says was targeting militants.

About 300,000 Rohingya had already fled Myanmar in earlier waves of communal violence.

‘They’re sending us to die’

The refugees are mostly living in basic conditions in sprawling camps near the Bangladeshi border town of Cox’s Bazar.

Myanmar and Bangladesh have agreed they should gradually be returned to Myanmar and thousands of people have been approved for return by Myanmar.

This has led to panic among the refugees, many of whom experienced violence in Myanmar, lost family members or saw their homes burned.

The first group were due to go on Thursday but Mohammad Abul Kalam, Bangladesh’s refugee commissioner, told AFP that none of the 50 families spoken to so far “expressed their willingness to go back under the present circumstances”.

“None feels safe to go back now. We cannot force them to go back against their will,” he said.

The BBC’s Yogita Limaye who is in one of the refugee camps says there is increased security presence with military trucks and busses as well as government officials.

She spoke to a 40-year old man in one of the camps who is on the list to be sent back.

“I’m scared about the repatriation,” he said. “Though they are trying to reassure us, I’m not convinced. I think they might kill us if we go there.”

Like many others he has sent his family into hiding in the camps. He said the only condition under which they were prepared to return to Myanmar was if they were given citizenship.

“If we have to go back, that is our fate. But I feel they will be sending us there to die.”

Another refugee told the BBC he fled with his wife and sons but that many relatives had been killed.

“They brutally tortured us,” he said, breaking down in tears. “The military came to us, they killed our people, threw kids in the fire and also set fire to houses. “

“I am very disturbed by this talk of going back. How can we go there?”

The biggest fear for the Rohingya is that they would be living among the Buddhist mobs accused of burning their villages and would be protected by the same army troops who are accused of committing genocidal acts against them.

It’s true that the Rohingya people are detested by large parts of Burmese society and particularly in Rakhine state where the worst persecution has played out.

Ethnic Rakhine villagers told me on a recent trip they believed all Rohingya were illegal and dangerous immigrants. The village administrator quietly said they were all “terrorists”. These views – extreme and unswerving – are widespread in Rakhine state.

So while the Myanmar government talks about building temporary shelters, offering medical care and sufficient food rations for Rohingyas who return, many international observers insist the root causes of the violence and hate-filled attitudes need to be properly tackled before Rohingyas can return home and live with safety and dignity.

The UN, charities and human rights groups are concerned there is no effective plan in place to independently monitor the Rohingyas safety if they return.

“We are witnessing terror and panic among those Rohingya refugees in Cox’s Bazar who are at imminent risk of being returned to Myanmar against their will,” Michelle Bachelet, the UN High Commissioner for Human Rights said.

She warned that lives would be put at “serious risk” if the repatriation was to go ahead.

“The Bangladesh government will be stunned to see how quickly international opinion turns against it if it starts sending unwilling Rohingya refugees back into harm’s way in Myanmar,” Bill Frelick, refugee rights director at Human Rights Watch, said.

Why are the Rohingya in Bangladesh?

The Muslim Rohingya are one of the many ethnic minorities in Myanmar. Authorities in predominantly Buddhist Myanmar see them as illegal immigrants, so they are denied citizenship and other rights.

There have been widespread allegations of human rights abuses, including arbitrary killing, rape and burning of land over many years.

Since then, at least 700,000 Rohingyas have fled to neighbouring Bangladesh.

A UN report said Myanmar military leaders should be investigated for genocide.

Myanmar’s army has previously cleared itself of wrongdoing and has rejected the UN’s allegations.

The country’s de-facto civilian leader Aung San Suu Kyi is currently in Singapore for an international summit where she was confronted by US Vice President Mike Pence over the issue.

“The violence and persecution by military and vigilantes that resulted in driving 700,000 Rohingya to Bangladesh is without excuse,” he said.

She responded that there were “different points of view” and both sides should “learn to understand each other better”.

Ms Suu Kyi has faced widespread international criticism for what rights groups say is her failure to speaking out against the army crackdown against the Rohingya.

Mahathir tells US: No warships in Asean waters but small patrol boats are fine