ISLAMABAD, Pakistan — A Pakistani Christian woman who spent eight years on death row after being found guilty of blasphemy — a conviction that was later overturned — has arrived in Canada, her lawyer said on Wednesday.

The woman, Asia Bibi, was convicted and sentenced to death in 2010 after being accused, based on little evidence, of speaking against the Prophet Muhammad during a heated argument with Muslim women. She insisted she had not done so and that she was the victim of false accusations prompted by bigotry.

Ms. Bibi, a former farmworker in her early 50s, was cleared of the charges last year and released from prison under government protection. That led to calls for her execution and violent protests by hard-line Islamists that paralyzed large parts of the country.

Her family appealed for asylum in Canada, Britain and the United States, saying that Ms. Bibi was in grave danger. Her lawyer briefly left Pakistan, citing threats to his life.

The lawyer, Saiful Malook, confirmed through text messages that Ms. Bibi had left Pakistan for Canada on Tuesday.

In a brief telephone interview from Pakistan, Mr. Malook said Ms. Bibi was in Ottawa, where her two daughters have lived since December.

“Now they should let her live in peace,” he said, referring to people generally and Muslims who live in Canada in particular. 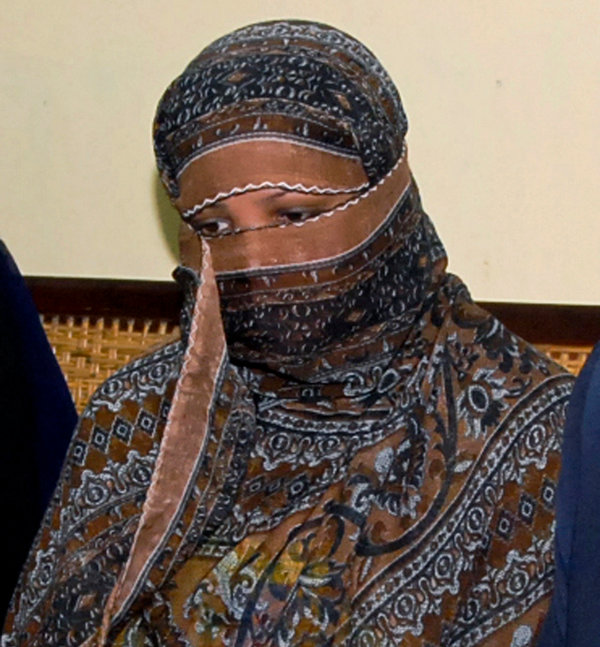 “She should never have been imprisoned in the first place, let alone endure the constant threats to her life,” he said. “This case horrifyingly illustrates the dangers of Pakistan’s blasphemy laws and the urgent need to repeal them.”

The original verdict convicting Ms. Bibi drew worldwide condemnation and calls for overturning Pakistan’s contentious blasphemy law, which was passed under the military dictator Gen. Mohammad Zia ul-Haq in the 1980s as a way to promote Islam and unite the country.

The law prescribes a death sentence for anyone convicted of insulting Islam or the prophet Muhammad. Rights groups say the law has been used by extremists as a bludgeon against religious minorities.

One outspoken critic of the blasphemy law was Salman Taseer, the governor of Punjab Province at the time of Ms. Bibi’s conviction. In 2011, he was assassinated by his bodyguard, who later suggested to the police that he had killed Mr. Taseer because of his opposition to the law.

Hard-line Islamist parties have opposed any changes in the law, and Ms. Bibi’s acquittal in October led to days of violent protests by members and supporters of Tehreek Labbaik Pakistan, a religious political party led by a firebrand cleric, Khadim Hussain Rizvi.

Mr. Rizvi was arrested in November in a government crackdown, along with hundreds of his party workers, in the wake of protests over Ms. Bibi’s fate. He and other party leaders were later charged with sedition and terrorism.

Britain's May to press future trade ties with Trump during visit: spokesman

German exports rebound less than expected in May

South Korea finds just one case of coronavirus antibodies out of 3,000 tested
We and our partners use cookies on this site to improve our service, perform analytics, personalize advertising, measure advertising performance, and remember website preferences.Ok