Home » Asia » Attacked and Vulnerable, Some Afghans Are Forming Their Own Armies

KABUL, Afghanistan — The slaughter of students, mostly teenagers, at a tutoring center. The deaths of young athletes in a suicide bombing at a wrestling club. Mothers shot dead with newborns in their arms.

These relentless killings of Hazaras, a persecuted minority in Afghanistan, finally proved too much to bear for Zulfiqar Omid, a Hazara leader in the central part of the country.

In April, Mr. Omid began mobilizing armed men into militias to defend Hazara areas against the Taliban and the Islamic State affiliate in Afghanistan. He said he now commands 800 armed men at seven staging areas mustered into what he calls “self-protection groups.”

“Hazaras get killed in cities and on highways, but the government doesn’t protect them,” Mr. Omid said. “Enough is enough. We have to protect ourselves.”

As U.S. and NATO forces withdraw from Afghanistan, and talks falter between the Taliban and the American-backed government, ethnic groups across the country have formed militias or say they plan to arm themselves. The rush to raise fighters and weapons evokes the mujahedeen wars of the early 1990s, when rival militias killed thousands of civilians and left sections of Kabul in ruins.

A concerted and determined militia movement, even if nominally aligned with Afghan security forces, could fracture the unsteady government of President Ashraf Ghani and once again divide the country into fiefs ruled by warlords. Yet these makeshift armies may eventually serve as the last line of defense as security force bases and outposts steadily collapse in the face of a fierce onslaught of attacks by the Taliban.

Since the U.S. troop withdrawal was announced in April, regional strongmen have posted videos on social media showing armed men hoisting assault rifles and vowing to fight the Taliban. Some militia leaders fear the flagging peace talks in Doha, Qatar, will collapse after foreign troops depart and the Taliban will intensify an all-out assault to capture provincial capitals and lay siege to Kabul.

“For the first time in 20 years, power brokers are speaking publicly about mobilizing armed men,” the Afghanistan Analysts Network, a research group in Kabul, wrote in a June 4 report. 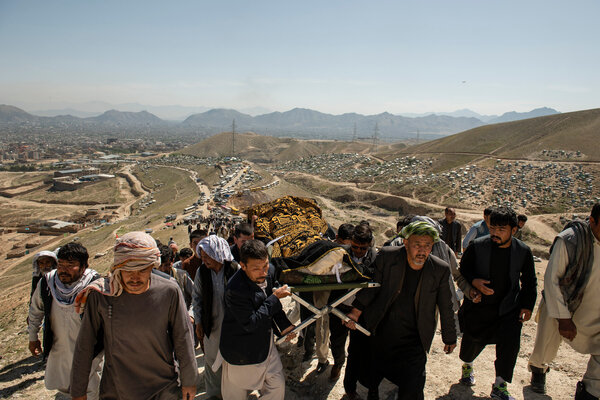 Hazaras have the most to fear from a return to power by the Taliban, which massacred thousands of the predominately Shiite group when the Sunni Muslim militants governed most of Afghanistan from 1996 to 2001. The Taliban consider Hazaras heretics.

The most prominent Hazara militia commander is Abdul Ghani Alipur, whose militiamen in Wardak Province, a mountainous area that borders Kabul, have clashed with government forces. Mr. Alipur had been implicated in the shooting down of a military helicopter in March. In an interview, he denied any involvement, although an aide said at the time that Mr. Alipur’s militiamen had shot at the aircraft.

“If we don’t stand up and defend ourselves, history will repeat itself and we will be massacred like during the time of Abdul Rahman Khan,” Mr. Alipur said, referring to the Pashtun “Iron Emir” who ruled in the late 19th century, massacring and enslaving Hazaras. Afghan folklore says he displayed towers built from severed Hazara heads.

“They forced us to pick up guns,” Mr. Alipur said of the government, which has failed to protect Hazaras. “We must carry guns to protect ourselves.”

Over the past two decades, Hazaras have built thriving communities in west Kabul and in Hazarajat, their mountainous homeland in central Afghanistan. But with no militias of their own, they have been vulnerable to attack.

Hazara demands for an army escalated after up to 69 schoolgirls were killed in a bombing in Kabul on May 8. Less than a month later, three public transport minivans were bombed in Kabul’s Hazara neighborhoods, killing 18 civilians, most of them Hazara. Among them was a journalist and her mother, the police said. Since 2016, at least 766 Hazara have been killed in the capital alone in 23 attacks, according to New York Times data.

“Tajik have weapons, Pashtuns are armed,” said Arif Rahmani, a Hazara member of Parliament. “We Hazaras must also have a system to protect ourselves.”

Mahdi Raskih, another Hazara member of Parliament, said he had counted 35 major attacks against Hazaras in recent years — a campaign of genocide, he said. He said he had lost patience with government promises of protection for Hazara schools, mosques and social centers.

“If they can’t provide security, be honest and admit it,” Mr. Raskih said. “People believe the government feels no responsibility for them, so our people must pick up guns and fight.”

Hazara soldiers, police and intelligence officers have quit or have been forced out of the security forces because of discrimination, Mr. Raskih said, providing militias with a valuable source of trained men. Many Hazara politicians, including Mr. Ghani’s second vice president, Sarwar Danesh, have called on the government to stop what they call a genocide of Hazaras. Hundreds of Hazaras have taken to Twitter, at #StopHazarasGenocide, to demand government protection.

Even as some Hazaras mobilize, some Tajik and Uzbek groups never completely disbanded the militias that helped U.S. forces topple the Taliban in 2001. Other ethnic commanders have recently begun forming militias as the Taliban continue to overrun government bases and outposts.

Many of these power brokers are locked in an enduring struggle with the Ghani administration, vying for control, while trying to gain the upper hand in a post-withdrawal Afghanistan.

Nationally, one prominent leader to maintain a militia is Ahmad Massoud, 32, son of Ahmad Shah Massoud, a charismatic commander of the Northern Alliance that helped U.S. forces rout the Taliban in late 2001.

Ahmad Massoud has assembled a coalition of militias in northern Afghanistan. Calling his armed uprising the Second Resistance, Mr. Massoud is purportedly backed by a few thousand fighters and about a dozen aging militia commanders who fought the Taliban and the Soviets.

Some Afghan leaders say Mr. Massoud is too inexperienced to effectively lead an armed movement. But some Western leaders view him as a valuable source of intelligence on Al Qaeda and Islamic State groups inside Afghanistan.

Elsewhere, the roll call of regional leaders who appear to be mobilizing reads like a who’s who of the country’s civil war in the 1990s. But their forces are nowhere near as commanding now.

The brutal Uzbek strongman, Gen. Abdul Rashid Dostum, has long maintained a private army of thousands from his base in Jowzjan Province. General Dostum, who has been accused of war crimes and sodomizing an Uzbek rival with an assault rifle, would nonetheless be a central figure in any armed uprising against the Taliban.

Another power broker whose actions are being watched closely, Atta Muhammad Noor, is a former warlord and commanding figure in Balkh Province, which includes Afghanistan’s commercial hub, Mazar-i-Sharif. He said on Tuesday that he would mobilize his militia forces alongside government troops to try to retake territory that had fallen to the Taliban in recent days after the insurgents’ rapid offensive in the north.

In Herat Province in the west, the former Tajik warlord Mohammed Ismail Khan, another Northern Alliance commander who helped defeat the Taliban, recently broadcast a raucous gathering of armed men on his Facebook page.

Mr. Khan told supporters that a half-million people in Herat were poised to take up arms to “defend you and keep your city safe” — a clear signal that he intended to mobilize his militia if peace talks between the Afghan government and the Taliban collapsed.

Also in Herat, Kamran Alizai, a Pashtun who leads the provincial council, said he commanded a large number of armed men ready to mobilize at a moment’s notice.

“I don’t want to tell you how many armed people I have, but everyone is armed in Afghanistan,” Mr. Alizai said.

If government forces were unable to hold Herat, he said, “We will stand by them and fight the Taliban.”

The Afghanistan Analysts Network reported that Abdul Basir Salangi, a former militia commander and an ex-police chief in Kabul, said in a speech in January that militias were forming in the Salang district in north-central Afghanistan in case talks collapsed. “Such talk has become more blatant since the U.S. troop withdrawal announcement,” the report said.

For Hazara militias, a wild card are thousands of Hazara former fighters of the Fatemiyoun Division, trained by Iran and deployed to Syria in 2014 through 2017, ostensibly to protect Shiite Muslim religious sites from the Sunni Muslim-dominated Islamic State. Others were sent to Yemen to fight alongside Houthi rebels against the Saudi-backed government.

Many Fatemiyoun fighters have returned to Afghanistan, raising fears they will be incorporated into Hazara militias, providing Iran a proxy force inside the country. But analysts and Hazara leaders say former Fatemiyoun have been turned away because of their Iranian ties and potential prosecution by the Afghan government.

In Kabul, many Hazaras say they are ready to take up guns. Mohammad, a shopkeeper who like many Afghans goes by one name, said he crossed a ditch flowing with blood when he ran from his shop to help after explosions rocked the neighboring Sayed Ul-Shuhada high school on May 8, killing the dozens of schoolgirls as they left for home.

“I’m 24, and there have been 24 attacks in my lifetime” against Hazaras, he said. In May 2020, he said, he was visiting his pregnant mother in a maternity ward when gunmen killed 15 people, including mothers cradling newborns.

“If this situation continues,” he said, “I’ll pick up a gun and kill whoever kills us.”

What Duterte can learn from Taiwan's leaders: Inquirer columnist