The incident is the latest in a series of violent attacks that have marred campaigning for election on December 30. 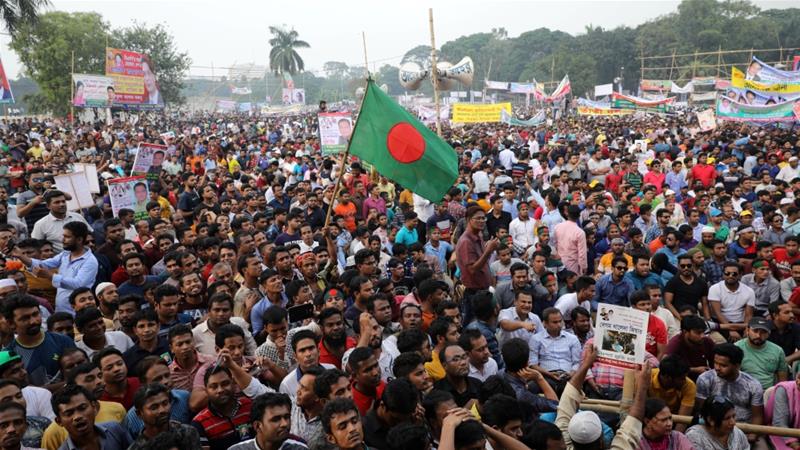 Around two dozen masked youths attacked a group of reporters in Bangladesh covering election campaigns with hockey sticks and batons, injuring about 10, the journalists said on Tuesday.

They also smashed hotel windows and vandalised more than a dozen vehicles belonging to media outlets or privately owned, they said.

“The miscreants vandalised 16 cars. At least 10 journalists from Jugantor and Jamuna TV were injured during the attack,” Masud Karim, a special correspondent of the Bengali national daily Jugantor told the AFP news agency, alleging the police delayed responding to their distress call.

The incident, which occurred late on Monday is the latest in a series of violent attacks that have marred campaigning for a national election on December 30.

The assault took place at the hotel the journalists were staying in the town of Nawabgonj about 40km from the capital, Dhaka.

The Jugantor daily also said one of its reporters has been missing since Monday evening.

“Some of us had to take shelter inside the toilet out of fear,” Abdullah Tuhin, a journalist with a local TV channel, told the Reuters news agency.

“The attackers threatened our colleagues and asked us to leave the place immediately or face serious consequences.”

Jugantor newspaper blamed the student and youth wings of the ruling Awami League party for the attack, although police said they did not know the identity of the attackers.

“We rescued them (the journalists) from the situation,” district police chief SM Shafiur Rahman told the AFP, rejecting the allegations police did not respond to the attack in time.

Dhaka Reporters Unity, a union body, said some of its members had been “seriously injured” in the assault. Nature of the injuries could not be immediately confirmed.

Opposition parties have complained of violent attacks against their workers by ruling party activists and mass arrests of their supporters and candidates on what they say are trumped-up charges during the election campaign.

Prime Minister Sheikh Hasina’s Awami League, which is seeking a third straight term in power, has denied accusations of trying to intimidate opposition candidates and journalists.

While Hasina’s administration has won plaudits globally for welcoming hundreds of thousands of Rohingya refugees fleeing persecution in neighbouring Myanmar, critics accuse her of cracking down on free speech and adopting an increasingly authoritarian style.

The government denies freedom of speech is under attack in the country of over 160 million people.

Households with maids use 20 per cent more water: PUB survey