COLOMBO, Sri Lanka — Sri Lanka’s politics plunged into deeper turmoil on Friday when a majority of the country’s parliamentarians refused to recognize the appointment of the new prime minister amid rising tensions and accusations of millions of dollars in bribes.

Last week, President Maithripala Sirisena unexpectedly fired Prime Minister Ranil Wickremesinghe, accusing him of being inflexible and corrupt, and replaced him with Mahinda Rajapaksa, a former president who is considered by many to be the strongman of Sri Lankan politics. Human rights investigators have accused Mr. Rajapaksa of war crimes dating to the country’s civil war.

Since last week both Mr. Rajapaksa and Mr. Wickremesinghe have claimed to hold power, setting off a constitutional crisis in this island nation, a popular tourist destination and a major producer of tea and coconuts.

While Mr. Rajapaksa has been meeting with foreign diplomats and making the rounds of government offices in the seaside capital, Colombo, Mr. Wickremesinghe has been holed up in the stately prime minister’s residence, Temple Trees. Hundreds of his supporters are standing guard outside, vowing to protect him.

Some lawmakers backing Mr. Wickremesinghe say they have been offered bribes of over $2 million to switch their support to Mr. Rajapaksa. Mr. Rajapaksa’s son, Namal, posted a Twitter message saying his party had no information about bribes being offered and that any such accusations should be immediately investigated.

On Friday, 118 lawmakers, a majority in the 225-seat body, poured into a committee room in the Parliament building for a meeting with Speaker Karu Jayasuriya. The legislators signed a resolution asserting that Mr. Sirisena’s actions were “unconstitutional, illegal and null and void” and refused to “accept the appointment of Mahinda Rajapaksa as prime minister by the president and all other appointments subsequently made.”

“This constitutional coup is now over,’’ announced Karunarathna Paranawithana, a lawmaker in Mr. Wickremesinghe’s coalition. “The only way Rajapaksa can hold on to power now is through the use of thuggery or the military.”

Sri Lanka has had a rocky recent past. It recently emerged from an ethnically driven civil war that Mr. Rajapaksa brought to an end with aggressive tactics that human rights investigators say killed thousands of civilians.

It is unclear whether he will be able to ride out this turmoil and legitimize his position as prime minister.

Much hinges on when Parliament will officially convene. Mr. Wickremesinghe’s side wants Parliament to meet next week, but a spokesman for the new government said Parliament won’t meet again until Nov. 16. 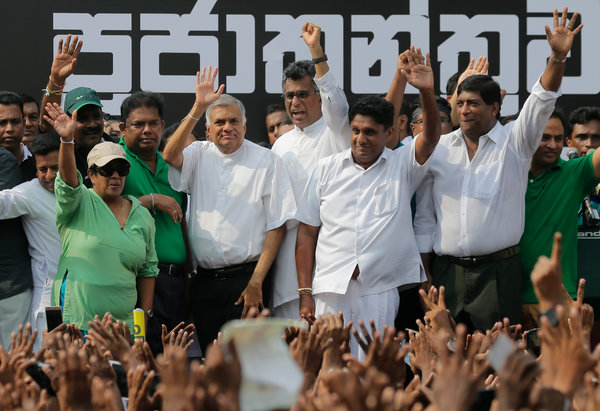 The longer the standoff continues, analysts said, the more it will help Mr. Rajapaksa, allowing him to use his copious resources and political skills to peel off lawmakers to his side. Five legislators from Mr. Wickremesinghe’s party have already defected to Mr. Rajapaksa and been granted cabinet posts.

Mr. Sirisena dismissed Mr. Wickremesinghe on Oct. 26 and named Mr. Rajapaksa to replace him. He then suspended Parliament, preventing a vote to determine which of the two could muster a majority and become leader.

The dispute took a deadly turn last weekend when government workers loyal to the president swarmed a minister who had been ousted with Mr. Wickremesinghe. The minister’s bodyguard opened fire, killing one person.

Friday’s meeting with Mr. Jayasuriya inside Parliament was the first real test of each leader’s support. Mr. Wickremesinghe, whose vote would have brought the tally to 119, did not attend the meeting.

“What President Sirisena has done is illegal and undemocratic,” said Rishad Bathiudeen, a Muslim lawmaker and leader of a party that has often played kingmaker in Sri Lankan coalitions. Mr. Bathiudeen and Rauff Hakeem, the leader of Sri Lanka’s largest Muslim party, control 13 seats whose members are standing with Mr. Wickremesinghe.

Some lawmakers who support Mr. Rajapaksa have said privately that they are worried about gaining enough votes in Parliament, though others predicted Mr. Wickremesinghe would lose support in the coming days.

Thousands of Sri Lankans have taken to the streets to support Mr. Wickremesinghe and democratic governance. The demonstrations have so far been mostly peaceful, but Mr. Jayasuriya, the speaker, has warned of a “blood bath” if Parliament was not permitted to meet and end the constitutional crisis.

The accusations of attempted bribery have inflamed the situation. Palitha Range Bandara, a lawmaker from Mr. Wickremesinghe’s party, told Mr. Jayasuriya that he had been offered $2.8 million to defect to Mr. Rajapaksa’s party.

Mr. Bandara said he would file a complaint with Sri Lanka’s Bribery Commission and hand over electronic and documentary evidence.

Mr. Sirisena has helped Mr. Rajapaksa set up a cabinet of about 14 ministers, and the pair have taken steps to slash prices on consumer and essential goods in an effort to to shore up popular support.

Many Sri Lankans are upset with the government after sharp rises in the price of household goods in recent months, driven by the country’s growing debt and a weakening currency. A number of big infrastructure projects begun under Mr. Rajapaksa have failed to pay off.