Huang Yulong never wanted a baby. As a child, he resented his parents, who left him in the care of relatives while they worked in faraway factories, visiting roughly once a year. He never felt a need to reproduce or pass on the family name.

“For our generation, children aren’t a necessity,” said Mr. Huang, a bachelor in the southern Chinese city of Guangzhou. “Now we can live without any burdens. So why not invest our spiritual and economic resources on our own lives?”

Mr. Huang, 27, is striving for a lifestyle known as “Double Income, No Kids,” or DINK. The acronym has been around for decades, but only recently entered the mainstream in China, where rising costs and other economic woes have caused many young people to avoid parenthood. The competition for schools and apartments is intensifying. Some couples say they don’t want more than one child. Others want none at all.

The lifestyle is also in direct conflict with the Chinese government’s effort to avert a coming demographic crisis. On Monday, Beijing once again revised its family planning policy, allowing families to have three children instead of two. The announcement was meant to encourage couples to make more babies, but men like Mr. Huang say they would rather remain childless — even going under the knife to ensure it.

And their ranks appear to be growing.

Today in China, several insurance companies market directly to “Double Income, No Kids” households. Matchmaking agencies are advertising their services to single men and women who don’t want children. Housing agents offer apartments that cater to childless couples. Bedrooms once pitched as future nurseries are being converted into home gyms. 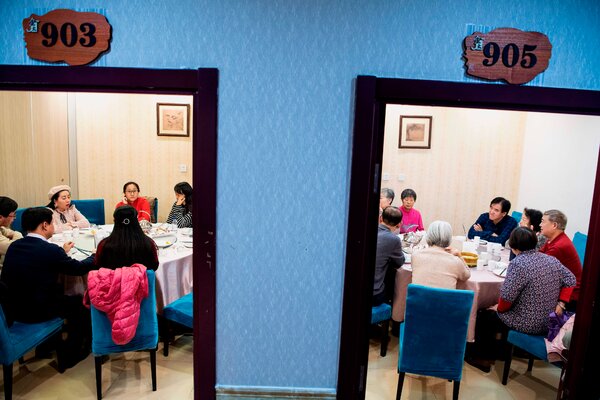 While Mr. Huang’s decision to have a vasectomy may seem extreme, demographers have long warned that the rising number of Chinese people choosing not to have children is a major reason for the country’s shrinking population. According to the latest census, the average household size is now 2.62, down from 3.1 in 2010.

Mr. Huang, who makes $630 a month repairing mobile phones, said much of his decision had to do with his absent parents as well as a lack of economic opportunity. His parents were factory workers in southern Guangdong Province and rarely came to visit him in Hunan, his hometown. They never developed a relationship with him, even though he was their only child.

“If I got married and had a child, I would still belong to the bottom class,” Mr. Huang said, referring to his background as a child of struggling factory workers. “When the time comes, I could also leave my child at home just like my parents. But I don’t want that.”

When he was 14, Mr. Huang left Hunan to find work in Guangdong, too. He later fell in love with a woman who wanted children, and he wrestled with the possibility of starting a family. He eventually broke up with her and, in June 2019, went to a hospital in Guangzhou for the vasectomy. He described it as a birthday gift to himself.

Besides Mr. Huang, The New York Times spoke with two other Chinese men who had vasectomies. They both requested not to use their full name for privacy reasons because some family and friends remain unaware of their surgery.

Choosing voluntary sterilization, especially as a young unmarried man, is still seen as culturally taboo in China’s patriarchal society. In many cities, doctors require a proof of marriage certificate and a partner’s consent. (Before the procedure, the doctor asked Mr. Huang if he was married with children. He lied and said yes.)

Most Chinese people have heard of sterilization in the context of the government’s earlier family planning policy, when it limited each household to one child to slow population growth during a period of rapid economic expansion. Though far more women were forcibly sterilized under the “one-child” rule, in very few cases, men were also taken away, for vasectomies.

The government’s three-child policy announcement this week was the latest effort to reverse some of those practices, but some men are now seeking the procedure on their own. Part of the reason, they say, is wanting to share the burden of contraception with their partner as they both pursue the DINK lifestyle.

Mr. Jiang, a 29-year-old personal trainer in southern Fujian Province, said he tried to get a vasectomy in about six hospitals and was rejected by all of them. The reason: He couldn’t provide a “family planning certificate,” an official document that states a person’s marital status and number of children.

“They just refused to do it for me and said, ‘Because you’re unmarried without any children, you are openly going against the country’s birth policy,’” said Mr. Jiang, who is single.

In March, Mr. Jiang eventually found a hospital in the southwestern city of Chengdu that was willing to provide the surgery. He posted a detailed account of the procedure in a forum for DINKs on Baidu, a popular Chinese search engine. He said he wanted to change people’s minds about the surgery because of a misconception that a vasectomy was the same as castration and that it made men effeminate.

“I admire you,” wrote one user on the forum. “Only a real warrior could take a knife to his own penis.”

“It’s for my own future happiness,” Mr. Jiang responded.

For decades, Chinese people were conditioned to have children out of tradition, filial obligation and, ultimately, a fallback for retirement. But an expanding social security net and a proliferation of insurance plans have given people more options.

China now has the world’s largest number of single people. In 2018, the country reported 240 million of them, accounting for about 17 percent of the total population. Although the percentage is still smaller compared to the United States, the number has risen by about a third since 2010.

“Young people today are not as capable of enduring hardship as the older generation,” said He Yafu, an independent demographer in the southern city of Zhanjiang. “Many think that not only would children not care for them when they are old, but instead be dependent on them. It’s better to save more money and enter a nursing home for more security or buy insurance policies.”

In discussing the new three-child policy, a government spokesman said on Monday that, on average, a Chinese person born in the 1990s only wants 1.66 children, a 10 percent drop from people born in the 1980s.

According to a 2018 study published by the Journal of Chinese Women’s Studies, the direct economic cost of raising a child from 0 to 17 years is about $30,000, seven times the annual salary of the average Chinese citizen.

Those kinds of numbers are often discussed in DINK forums, which have also become informal dating sites, with some of most popular threads being marriage advertisements.

“Yearning for a world of just two people,” one read. “I really don’t like children, I can even say I hate them. I know how difficult it is to raise them! The efforts are not proportional to the gains!”

Mr. Huang, a 24-year-old graduate student in computing in the city of Wuxi, said he met his prospective partner, a 28-year-old woman, on a DINK forum. “I constantly tell her how high and scary the costs of childbirth are to women,” he said.

After admitting online to his fellow college friends that he feared having children, one person responded to Mr. Huang by suggesting he get a vasectomy. Last November, Mr. Huang had the surgery in the city of Suzhou. He called six hospitals before he could find a doctor willing to provide the procedure, he said.

Mr. Huang’s retirement plan is to emigrate to Iceland or New Zealand, countries that have relatively strong social safety nets. He said he has calculated the number of years that a child can perform his filial duties — “about 10 years” — and has concluded that it is not worth it.

“Raising a child is a high price, low return task,” he said. “I think having one is very troublesome.”