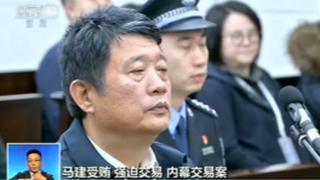 China’s ex-intelligence chief Ma Jian has been sentenced to life in prison for crimes including taking bribes and insider trading, a court says.

Ma had been put under investigation in 2015 and expelled from the Communist Party one year later.

He pleaded guilty and would not appeal, a court in the north-eastern Liaoning province said.

Many high-ranking officials have been toppled as part of President Xi Jinping’s vast anti-corruption drive.

Ma Jian was vice-minister in the powerful ministry of state security, which oversees foreign and counterintelligence operations.

His case is linked to that of one of China’s most-wanted fugitives, exiled property tycoon Guo Wengui, who has published a series of allegations of corruption among top members of the Communist Party.

“The defendant Ma Jian’s bribery amount was extremely large, and the national and people’s interests suffered a particularly heavy loss, which seriously infringed on the integrity of civil servants.”

Ma Jian and Guo Wengui could not be reached for comment.

More than one million officials have been punished in the anti-corruption drive started by Mr Xi when he took power in 2012, the government says.

The campaign has been described by some as a massive internal purge of opponents, on a scale not seen since the days of Mao Zedong, in whose Cultural Revolution many top officials were purged.