Home » Asia » Clashes in Indonesia over sex before marriage bill 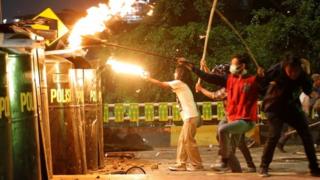 Police have fired tear gas and water cannons at protesters demonstrating outside the Indonesian parliament over a proposed new criminal code that would ban sex before marriage.

Protests against the bill also took place in other cities in the country.

The bill would outlaw most abortions and make insulting the president illegal.

The bill has been delayed, but protesters are concerned it could still eventually pass through parliament.

What’s in the controversial bill?

The bill was initially scheduled for a vote on Tuesday – however, President Joko Widodo postponed the vote on Friday, stating that that new laws needed more consideration.

Why are people protesting?

Despite the delay, many Indonesians are concerned that the bill could still be pushed through parliament.

There is also anger over the passing of a new law that has weakened the Corruption Eradication Commission, an important arm in rooting out corruption.

What happened on Tuesday?

Thousands of protesters, many of which were students, took to the streets in cities across Indonesia.

Protesters pelted police with rocks, who responded with tear gas and water cannons.

One placard held by a woman said: “My crotch does not belong to the government”.

Protests in other areas, including Yogyakarta and Makassar on Sulawesi island, continued for a second day.

“We’re going to parliament to oppose the new law for the anti-corruption agency that are not pro-people but are pro-corruptors,” Fuad Wahyudin, 21-year-old student from an Islamic university in West Java, told Reuters.

More than 5,000 police have reportedly been deployed to maintain security in Jakarta.

U.S. and Taliban Make Headway in Talks for Withdrawal From Afghanistan

Coronavirus: MOE provides tips for parents on how to support children's learning at home