BANGKOK — Nearly three months after Sriwijaya Air Flight 182 crashed into the Java Sea, Indonesian officials announced Wednesday that they had recovered the memory module of the aircraft’s cockpit voice recorder by pumping up mud and sand from the seafloor.

The crucial memory unit, which apparently broke loose from the cockpit voice recorder on impact, could reveal the final words of the pilot and co-pilot as the Boeing 737-500 plummeted into the sea on Jan. 9.

The module was recovered Tuesday night and brought to shore Wednesday by a Coast Guard ship. Officials said they believed the module was still functional and that it would take three days to a week to download and read its data.

The aircraft crashed minutes after taking off from Soekarno-Hatta International Airport near Jakarta, the Indonesian capital, killing all 62 people aboard, including six active crew members.

The cockpit voice recorder is one of two so-called black boxes carried by commercial aircraft that record flight data and voice communications. The data recorder, which records information about the jet’s mechanical operation, was recovered three days after the crash.

Divers searching in waters about 60 feet deep initially found the broken casing of the cockpit voice recorder. But its crucial memory module, which records such sounds as engine noises and cockpit conversations, remained elusive. 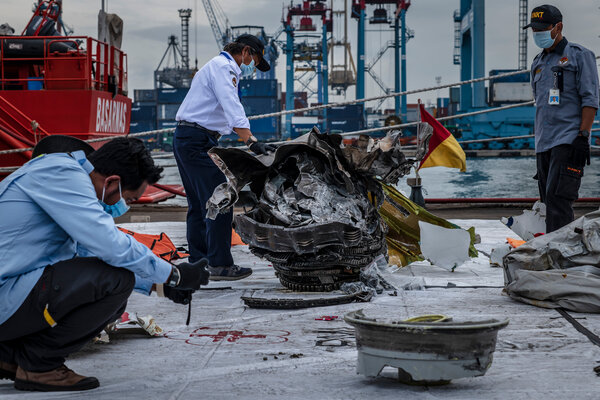 In a search hampered by rough weather and poor visibility, divers attempted for six weeks to locate the unit without success. Officials tried various other methods and then brought in a dredging ship last week to pump up mud and sand from the seafloor.

After about eight days of sifting through it, crews finally found the module. They had planned to halt operations with the dredging ship on Wednesday if they had not found the device by then.

“There’s a mud sucker that works like a vacuum cleaner,” said Soerjanto Tjahjono, chief of the National Transportation Safety Committee. “We extracted the mud down to one meter deep. Last night, when it was the last night of the search, we found it.”

A preliminary crash investigation by the committee, which was based in part on information from the data recorder and maintenance records, concluded last month that a difference in the level of thrust between the plane’s two engines might have contributed to the aircraft rolling over before it plunged into the sea.

A difference in the level of thrust — the force of the engines that propels the aircraft forward — can make planes difficult to control, but it is unclear why that problem may have occurred during the Sriwijaya flight.

Officials hope that the recovered memory module will shed some light on why the pilot and co-pilot were unable to recover control of the plane, which plummeted more than 10,000 feet in less than a minute.

“Without the cockpit voice recorder, it would be very difficult to know the cause in this Sriwijaya 182 case,” Mr. Soerjanto said.

The Sriwijaya aircraft was the third to crash into the Java Sea in just over six years after departing from airports on Java, one of Indonesia’s five main islands.

In December 2014, Air Asia Flight 8501 crashed into the Java Sea off the coast of Borneo with 162 people aboard as it flew from the Indonesian city of Surabaya to Singapore. Investigators eventually attributed the disaster to the failure of a key component on the Airbus A320-200 and an improper response by the flight crew.

And in October 2018, Lion Air Flight 610 nose-dived into the Java Sea northeast of Jakarta minutes after taking off for Pangkal Pinang with 189 aboard. Investigators concluded that the anti-stall system malfunctioned on the Boeing 737 Max, a newer model than the Boeing that crashed in January.

8 things to know about changes to Singapore's integrated resorts