Starting in the spring, the Taliban negotiated wholesale surrenders and seized roadways and weapons, handing them vital propaganda victories and freedom to move quickly to the next opportunity.

Crowds trying to flee the country gathering at the entrance gates to the international airport in Kabul, Afghanistan, on Wednesday.Credit…Jim Huylebroek for The New York Times

In early May, a Taliban commander telephoned Muhammad Jallal, a tribal elder in Baghlan Province in northern Afghanistan, and asked him to deliver a message to Afghan government troops at several bases in his district.

“If they do not surrender, we will kill them,” Mr. Jallal said he was told.

He and other tribal elders complied. After several rounds of negotiations, two government bases and three outposts surrendered without a fight. More than 100 security forces handed over weapons and equipment and were sent home unharmed.

The Taliban’s strategy of coercion and persuasion was repeated across the country, unfolding for months as a focal point of the insurgents’ new offensive this year. The militants cut multiple surrender deals that handed them bases and ultimately entire provincial command centers, culminating in a stunning military blitz this summer that put the militants back in power two decades after they were defeated by the United States and its allies.

The negotiated surrenders were just one element of a broader Taliban strategy that captured heavily defended provincial capitals with lightning speed, and saw the insurgents walk into the capital, Kabul, on Sunday with barely a shot fired. It was a campaign defined by both collapse and conquest, executed by patient opportunists. 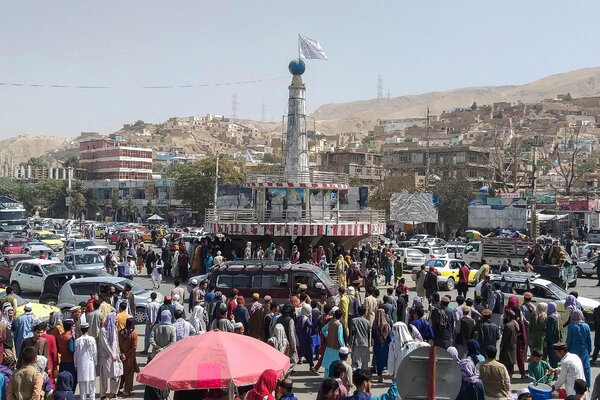 Each surrender, small or large, handed the Taliban more weapons and vehicles — and, vitally, more control over roads and highways, giving insurgents freedom to move rapidly and collect the next surrenders as the security forces were progressively cut off from ammunition, fuel, food and salaries.

Each victory also added to a growing sense of inevitability that the Taliban would eventually prevail, especially after the militants poured so many resources into winning the north, a traditional stronghold of anti-Taliban militias. As those outposts and districts fell, the Taliban gained important propaganda victories, quickly spreading the word that they could overcome even dogged resistance, and would keep their word to allow soldiers and policemen to walk away with their lives.

The result was a lopsided fight between an adaptable and highly mobile insurgent juggernaut, and a demoralized government force that had been abandoned by its leaders and cut off from help. Once the first provincial capital city surrendered this month, the big collapses came as fast as the Taliban could travel.

The Taliban triumph came just four months after President Biden announced on April 14 that he would honor a deal with the Taliban signed by the Trump Administration to withdraw all American troops beginning May 1. The announcement sank the morale of already beleaguered security forces and emboldened the Taliban, which had failed to honor most pledges under the February 2020 agreement.

Over 30,000 people with history of severe allergies to be invited for Covid-19 jab

Jump in community cases sparks urgency to get jabbed