When the pipes carrying oxygen to critically ill Covid-19 patients stopped working at a hospital in the southern Indian state of Karnataka on Sunday evening, relatives of sick patients used towels to fan their loved ones in an attempt to save them.

Some anguished family members sent desperate pleas for oxygen on social media. Others grabbed their phones and frantically dialed local politicians. A few even sprinted down the hospital’s hallways, desperately searching for a doctor, a nurse, anyone, to help.

But nothing worked. There was no oxygen left.

“Everyone was helpless,” said Rani, who goes by one name, and whose husband Sureendra, 29, was among several Covid-19 patients who died because the lifesaving oxygen had suddenly run out. “I want to kill myself. What will I do without my husband now?”

Local officials provided different accounts of the death toll at the hospital. Some said that at least 10 died from oxygen deprivation. Others said that 14 more died after the accident but that they died of comorbidities related to Covid, not directly from the oxygen shortage.

Officials were clear, though; the oxygen had run out.

“The deaths happened between Sunday and Monday morning, but we can’t say all died due to lack of oxygen,” said M.R. Ravi, an official in Chamarajanagar, a town in the southern part of Karnataka. “We are investigating the cause.”

What happened at the Chamarajanagar District Hospital in Karnataka on Sunday night and into Monday morning, after the oxygen disappeared, is the latest in a series of deadly accidents occurring across India as the country battles a tremendous second wave of infections and demands for medical oxygen far outstrip supply. 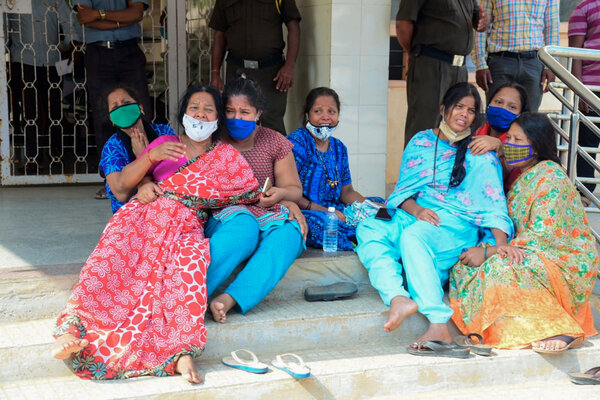 Last week, after oxygen ran out at one hospital in India’s capital, New Delhi, 12 people died. The week before that, it was 20. On Monday, four sick people died in a hospital in Madhya Pradesh State, in central India, after family members said that there, too, the oxygen had run out though officials denied that.

Doctors at dozens of hospitals in Delhi have been warning that they have come dangerously close to running out as well and that it was untenable to keep waiting for last-minute supplies to arrive. As the latest incident shows, at a hospital more than a thousand miles from the capital, oxygen shortages have now spread nationwide.

Other countries, from Mexico to Nigeria, have faced oxygen shortages as well, and the World Health Organization estimated earlier this year that 500,000 people were in need of medical oxygen every day.

But no country has seen as many sick people desperate for oxygen as there are in India right now, and the deadly accidents, like what just happened in Karnataka, keep repeating themselves.

“It is a failure of governance,” said Ritu Priya, a professor, at Center of Social Medicine and Community health in Jawaharlal University, in New Delhi. “We were not able to channelize oxygen distribution over the past year, when that is what we should have been doing.”

Medical oxygen has suddenly become one of the most precious resources in India, and the need for it will continue as the surge of coronavirus infections is hardly abating.

On Monday, the Indian federal Health Ministry reported 368,147 new cases and 3,417 deaths from the virus, a figure that remains low on the first day of the week. The Indian government says that it has enough liquid oxygen to meet medical needs and that it is rapidly expanding its supply. It blames logistical issues for shortages of oxygen, but many doctors and sick people question that.

While people continue to die from a lack of oxygen, Prime Minister Narendra Modi’s government and the local government in Delhi, the epicenter of the oxygen crisis, are fighting in court.

On Saturday, a court in New Delhi warned the federal government that it will face contempt charges if it does not maintain a steady stream of oxygen to hospitals in New Delhi, the government of which is run by an opposition party.

“The water has gone above our head,” a judge said in the court. “Enough is enough. You made an allocation of oxygen to Delhi, you fulfill it.”

Representatives of the federal government told the court on Sunday that its officials are working hard to deal with the crises and any such order would have a demoralizing effect on them.

“Whatever oxygen is being supplied in Delhi is also not being distributed and utilized in a judicious manner, causing serious risk to the lives of residents of Delhi,” lawyers representing the federal government told the court.

India has been receiving aid from other countries, and many have airlifted oxygen generators, including France, which delivered eight oxygen generator plants on Sunday, and from Saudi Arabia and the United Arab Emirates. The country has also received six planeloads of equipment and supplies including material for coronavirus vaccines from the United States.

What is complicating matters in India is that the oxygen production facilities are concentrated mostly in its eastern parts, far from the worst outbreaks in Delhi and in the western state of Maharashtra, requiring several days’ travel time by road.

In recent days delays in moving oxygen to the hospitals in cities that are far from the generating plants have caused deaths which could have been avoided, experts said. On Saturday 12 patients, including a doctor, died when a hospital in New Delhi, ran out of oxygen for an hour, according to Sudhanshu Bankata, an official of the Batra Hospital, where the deaths took place.

The same thing happened at Jaipur Golden Hospital in New Delhi. Dr. Deep Kumar Baluja, an administrator at the hospital, which is dedicated to Covid-19 patients, said his hospital had been getting oxygen supplies each day at a specific time from the suppliers. But on April 24, Dr. Baluja said, those supplies failed to arrive on time.

The 20 patients died “one after another,” he said. “I have no words to express what I felt when patients died.”

Japan emperor's parade to be delayed to November 10: NHK