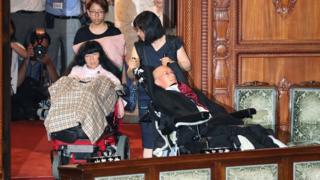 Two politicians have taken their seats in Japan’s parliament as the first lawmakers with severe disabilities.

Yasuhiko Funago and Eiko Kimura are both largely paralysed and rely on carers for their physical needs.

Their election last month has been seen as major step for representation and the visibility of people with disabilities in Japan.

The upper house underwent special modifications to allow for their access.

After entering through the main gate of the National Diet via a special ramp, the two took their seats for the first time on Thursday to cheers from supporters.

Yasuhiko Funago has amyotrophic lateral sclerosis (ALS), also known as Lou Gehrig’s disease, and communicates using a computer system or through his carers.

The 61-year old was diagnosed with the progressive neurological disease in 2000 and since then has lost more and more mobility in his limbs.

“I am full of emotions that this moment has arrived,” Mr Funago said after his election in July. “I may appear weak, but I have more guts than others as it has been a matter of life and death for me.”

Eiko Kimura has cerebral palsy and is paralysed from her neck down except for her right hand.

She has had the disability since she was eight years old but has long promoted better integration of people with disabilities into society.

What party did they run for?

Both ran on the list of the small leftist opposition party Reiwa Shinsengumi, founded by actor-turned-politician Taro Yamamoto.

Advocating a society that does not cut anyone off, the party especially focuses on people it says are overlooked in Japan’s traditional society.

Aside from people with disabilities, candidates included single parents and part-time workers among others.

Reiwa Shinsengumi won two seats in the election. Mr Yamamoto won the direct votes, but under the senate’s partial proportional representation system the seats were allocated to Mr Funago and Ms Kimura.

What modifications were needed? 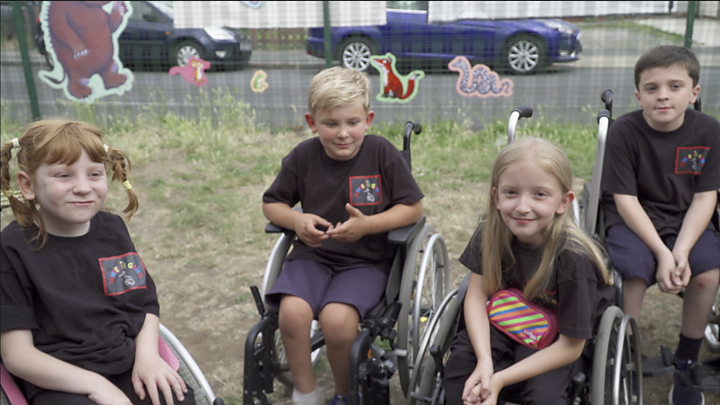 While the two lawmakers are not the first politicians to use a wheelchair in the senate they are the first with severe disabilities.

Seats were removed so that a reclining wheelchair would be able to fit in and rules had to be changed to allow carers to be present during sessions.

Japan’s cabinet office says there are 9.63 million people with disabilities in the country.

In 2020, Tokyo will host the Paralympics alongside the Olympics.