Last week, I wrote about whether an Asian-Australian accent existed and asked for your thoughts on how the Australian accent is changing. Dozens of readers wrote in about their experiences navigating regional, cultural and ethnic Australian accents, observing that the way we speak is becoming more homogenized, and to correct my own Australian linguistic error — yes, you’re right, we throw prawns, not shrimp, on the barbie.

Thank you to everyone who shared their thoughts. Here is a sampling of the responses we received.

What Did You Say? Wool?

I live in regional Western Australia, but I went to university at the University of New South Wales in Sydney about 30 year ago. I found that I had to adjust my accent for people to understand me. I studied a course called “Wool and Pastoral Science.” When I said “wool” I found many people thought I was saying “ool” and I had to make an effort to pronounce the “w.” I was told that in Western Australia we have implosive consonants, and in N.S.W. the consonants are explosive. The same thing happened when I said I come from “Kojonup.” Most people thought I said “Kojonu.”

I went to a private all-girls school in Perth, and my accent probably reflected that. But, I have also noticed, like you say, that accents are not as diverse now as they were when I was a teenager. The kids learn expressions from social media. Much of the mainstream media is national rather than state-based. I wonder if my kids would have the same issues?

The Pros and Cons of Homogenization

As an Australian of Indian ethnicity, I loved this article.

My view is that with our children, they will have a stronger Australian accent than we do, as their ears were never “trained” to pick up the sounds from our mother tongues. This is not always a good thing — I grimace every time I hear my kids pronounce an Indian person’s name (or food dish) like an ocker.

There are still some differences in the Aussie accent between states and between city and country, but the broader Australian accents seem to be disappearing and becoming more homogenized.

An Australian accent is still quite distinctive and discernible when heard overseas away from Australia. We still shorten our words and use “ie” at the end of some words, e.g. sickie (taking sick leave from work), breakie (breakfast). But the real Australian slang is vanishing.

“You liddle beauty. Can’t wait for a flamin ripper of a Chrissy.” Yes, my Queensland cousins used to speak like that to me in 1965, and it was their natural way of expressing themselves.

Your article regarding Asian Australian accents is spot on, but it’s written from a myopically Asian viewpoint.

You entirely missed the fact that there have been very distinctive and easily identifiable Greek, Italian and Lebanese Australian accents (and patois) for decades.

Reading your letter really resonated with me. Not because I am Asian-Australian myself, but because I undeniably have what I call a “Jewish-Australian” accent.

Like my parents, I was born and raised in Melbourne, Australia. But nine out of ten times that I speak to someone new, they inevitably ask me “So what part of America are you from?” or “Is that an American accent I detect?” Initially reluctant to announce my Jewish identity (a symptom of minority mentality, as you mentioned in your letter), I used to rely on the excuse that I was brought up on a lot of TV, usually accompanied with an awkward laugh that begged them to accept this answer.

Although this excuse has an element of truth to it (as a kid, I watched a lot of Nickelodeon and used words like “vacation” and “soda” as a result) it never seemed to satisfy people, who would question me further in disbelief. Eventually, I would also admit to the fact that I’m Jewish and that all my Jewish friends seem to have the same accent, and maybe that has something to do with it. This is usually when people’s eyes get really big and they start nodding their heads in more confusion, too awkward to question me further.

While I used to get embarrassed when asked about my accent, I’ve recently come to embrace the truth and have started to simply respond, “Oh I’m not American, I’m just Jewish.” Mostly because it ends the conversation quickly. But I also think that it’s important that people understand that different cultural and religious demographics have different Australian accents and dialects, but that doesn’t make us any less Australian. Answering honestly feels like an affirmation of my Jewish-Australian identity — something that I cannot hide even if I tried, evidently because of my Jewish-Australian accent.

Having lived in Hong Kong for about a decade and a half and being a moderately proficient Cantonese speaker, I can hear the accent you describe and have a theory for it.

While the Asian-Australian accent is nothing so pronounced as the native Hong Kong-English accent, my hypothesis is that there is something in the cultural Chinese linguistics that give rise to the accent you describe. First, as you know, Chinese has very few connecting words (i.e. the verb “to go” is a single character, so there is no “to” equivalent) and Chinese is rich in single characters (or limited character phrases) that carry broad meanings. Therefore, I’m wondering if the heritage of minimal-language-for-vast-meaning is not playing out in Asian-Australians by being minimalists with word sounds? Therefore, while being fluent English speakers with Australian accents, a nod to Asian heritage comes through (perhaps subliminally) via reduced sounds per word. Just a hunch.

Now for our stories of the week: 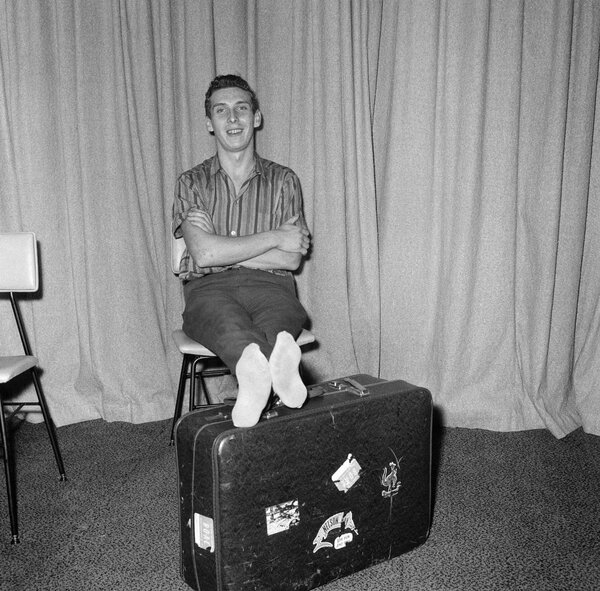 A Man Who Shipped Himself in a Crate Wants to Find the Men Who Helped. Over 50 years after Brian Robson mailed himself out of Australia, emerging almost 8,000 miles away, he is looking for two friends who assisted.

The Fairy Circles Mystery Gets a New Suspect. A small study suggests that soil microbes could play a role in the ringlike grass formations in parts of Australia’s wilderness.

Need New Skills? How About a Hug? The Women’s Shed Welcomes You. In Australia, men’s sheds became a global model for helping “old boys” continue living meaningful lives. Now, women are starting their own.

Are Your Illegal Drugs Pure? New Zealand Will Check Them for You. A law will allow controlled substances to be tested without penalty to ensure their authenticity. The goals are to reduce health risks and, perhaps, change users’ behavior.

How a Burst of Light in the Sky Illuminated Something Primal. Videos of a mysterious celestial phenomenon captured a once-common human emotion: awe at the wonder of the heavens.

What the Coronavirus Variants Mean for Testing. Most tests should be able to detect the variants of concern, but test developers and health officials must remain vigilant, scientists say.

The Crucial Questions for Afghanistan. What will happen to women and minorities? Can the Afghan president hold on to power? These and other pressing questions face a fearful country as the United States (and Australia) withdraws its military forces.

Her Boss Sent Harassing Texts. So She Beat Him With a Mop. A government worker in China became an internet sensation after a video emerged of her striking back at a boss she had accused of harassment.

Feeding Hate With Video: A Former Alt-Right YouTuber Explains His Methods. Focus on conflict. Feed the algorithm. Make sure whatever you produce reinforces a narrative. Don’t worry if it is true.