Prime Minister Modi faces criticism for not allowing questions as opposition MPs look to corner gov’t on its policies. 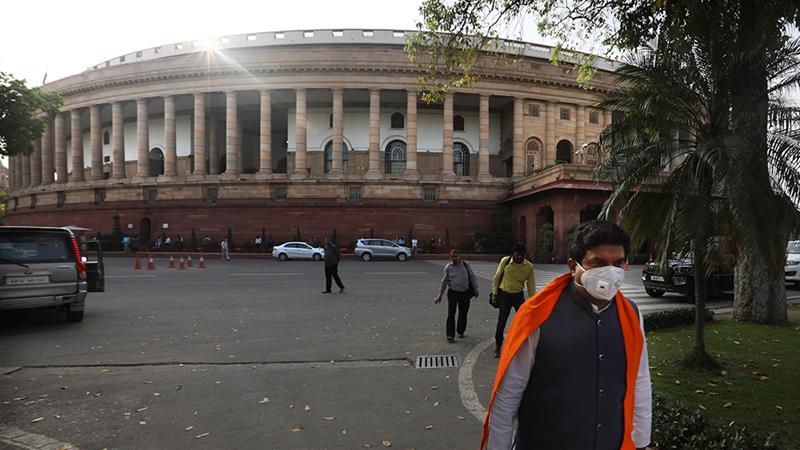 Indian lawmakers have returned to Parliament after a five-month absence, with the government’s response to the coronavirus pandemic, the nosediving economy and simmering tensions with China setting the stage for a turbulent session.

The 18-day session comes as coronavirus infections in India surge faster than anywhere else in the world, with more than 92,000 new cases added on Monday, the day the session opened.

India’s total infections have soared past 4.8 million, while more than 79,700 people have died.

Lawmakers wore masks and sat separated by transparent plastic sheets while in Parliament. Sessions will be shortened and other health protocols put in place to guard against the virus.

Opposition parties have protested the cancelling of Question Hour, when lawmakers ask questions to ministers and hold them accountable for the functioning of their ministries, saying that takes away the opportunity to grill the government on its policies.

Instead of the hour of open debate, only written questions will be allowed.

The government has defended the move to suspend Question Hour, with Parliamentary Affairs Minister Pralhad Joshi saying the “government isn’t running away from discussion”.

The parliament session is expected to be challenging for Prime Minister Narendra Modi and his government.

It includes laying out measures to revive an economy that shrank by nearly 24 percent in the last quarter, the most of any major country, and trying to stop a virus surge worsened by a weak and underfunded healthcare system.

Other measures may be discussed, including to mitigate rising unemployment and solve a bitter military standoff with China, three months after their deadliest military confrontation in decades.

On Monday, Modi appealed to all political parties to stand in solidarity with the soldiers guarding India’s borders even as opposition parties demanded more clarity on the government’s response to the standoff with China.

The border tensions in the cold-desert Ladakh region escalated in June to a medieval clash that killed 20 Indian soldiers when hand-to-hand combat broke out. The Asian giants have accused each other of sending soldiers across the dividing line and firing warning shots for the first time in 45 years, threatening a full-scale military conflict.

The foreign ministers of the two countries have agreed to deescalate border tensions, but resolving the impasse is expected to be a long process.

Modi also said his government will not rest until a vaccine is developed to fight the coronavirus.

But many opposition legislators worry that the government does not look like it is in control.

Main opposition Congress party leader Rahul Gandhi targeted Modi over the spike in virus cases and accused the government of implementing the lockdown without a plan.

“Unplanned lockdown was the gift of one man’s ego, which led to the spread of coronavirus across the country,” Gandhi tweeted on Monday.

Millions of Indians lost their jobs instantly and tens of thousands of migrant workers, out of money and fearing starvation, poured out of cities and headed back to villages when Modi ordered the nationwide lockdown on March 24.

The unprecedented migration not only hollowed out India’s economy but also spread the virus to the far reaches of the country. Restrictions have been eased since to revive the economy, even as virus cases grew.