(Reuters) – European stocks ended another tumultuous session higher on Wednesday as investors bet on further stimulus measures to dull the economic impact from the coronavirus outbreak, which showed no signs of slowing. 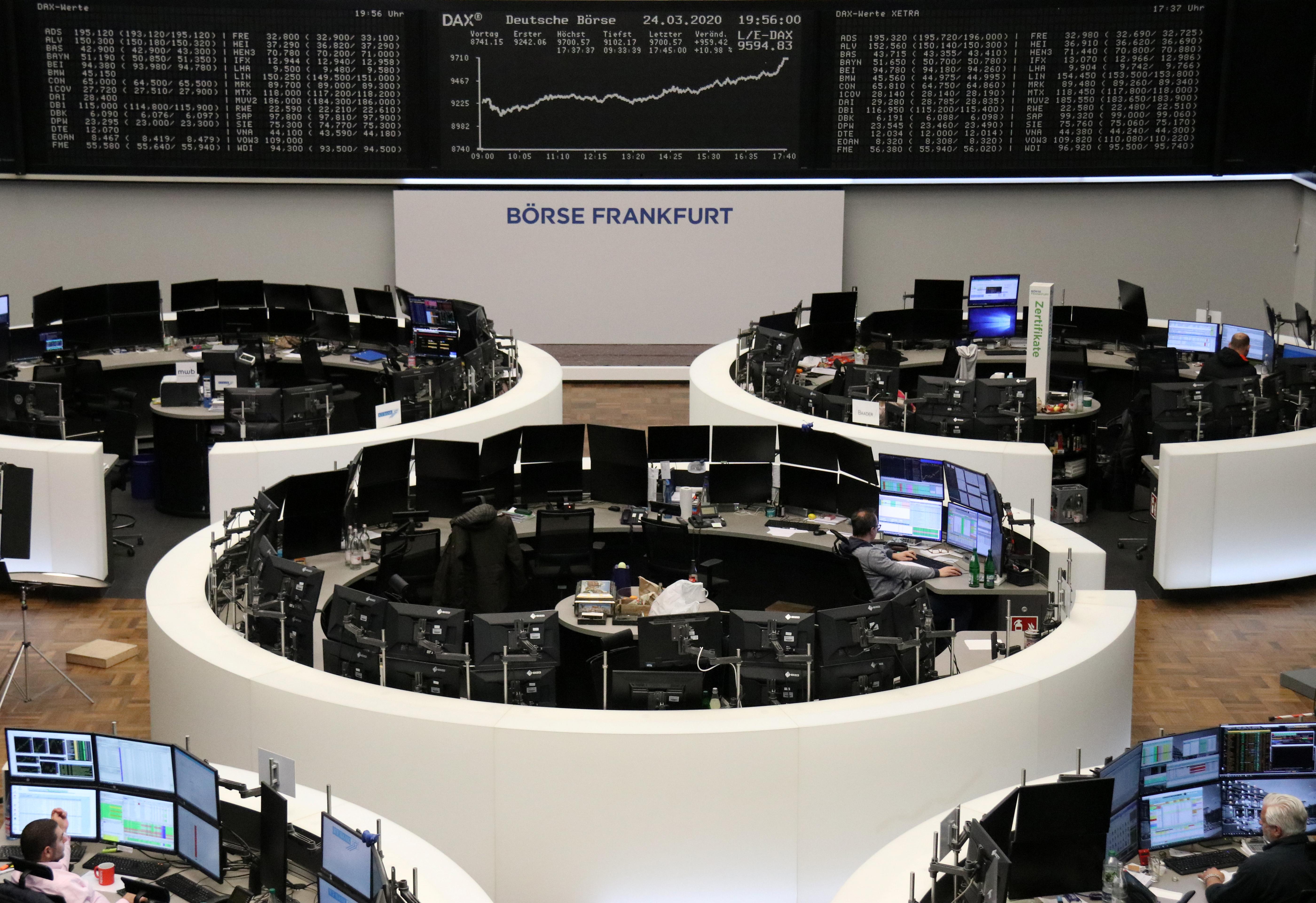 The pan-European STOXX 600 index closed up 3.1% after earlier trading both in negative territory and as much as almost 5% higher.

The index is still around 28% down from its record high in February, despite gains in the last two sessions.

The energy .SXEP and travel & leisure .SXFP sectors, which have been worst hit by the recent rout, led gains for the day as cheap valuations attracted buyers.

However, the euro zone’s volatility indicator .V2TX also ticked up on the day. With coronavirus death tolls in Italy and Spain now the highest in the world, and with several major European economies in lockdown, the situation seemed unlikely to improve any time soon.

Still, sentiment was helped by the anticipation of a whopping $2 trillion U.S. fiscal stimulus package.

Regional governments are also expected to ramp up measures to dull the economic shock, with German lawmakers voting in favor of suspending the constitutionally enshrined debt brake for the first time ever to finance an unprecedented aid package.

A report also suggested that Germany, Europe’s largest economy, was open to using the European Stability Mechanism (ESM) to prop up economies hit by the coronavirus.

“In our view, the challenge for EU leaders is to design an ESM program – and the political narrative around it – in a way that removes stigma and the notion of ‘bailout’, which could prove costly for the domestic politics of receiving countries,” Reinhard Cluse, chief European economist at UBS wrote in a note.

German stocks .GDAXI rose about 1.8%, while stocks in Italy .FTMIB, the country worst hit by the virus, rose about 1.7%.

German online fashion retailer Zalando (ZALG.DE) closed about 7.5% higher despite warning that shutdowns due to the virus were hurting demand for its products.

Banking services provider Virgin Money UK (VMUK.L) topped the STOXX 600, adding about 26% in its second session of recovery after touching a record low earlier in the week.

European airlines, one of the worst hit sectors from travel restrictions and evaporating passenger numbers, have appealed to governments for bailout packages to prevent an industry collapse.

Meanwhile, Refinitiv data showed that profit expectations for European companies have deteriorated substantially, with markets now seeing a 14.9% decline in earnings from STOXX 600-listed companies over the second quarter.

Superfish being bred to ramp up locally produced protein

Umno at a crossroads after Najib's conviction