TOKYO — When Prime Minister Shinzo Abe of Japan traveled to Darwin, Australia, on Friday and joined his Australian counterpart, Scott Morrison, to lay wreaths at a memorial commemorating the 250 people killed by Japanese bombs there during World War II, it was more than a moment of reconciliation between a wartime aggressor and its victims.

The gesture, which took place at the beginning of Mr. Abe’s daylong visit to Australia, represented Japan’s effort to cement a relationship between two allies as it faces perilous headwinds closer to home.

Arriving in Australia after two days in Singapore for a summit meeting of the Association of Southeast Asian Nations, Mr. Abe demonstrated that Japan was determined to strengthen ties with its prosperous neighbor to the south.

Taking sides is a delicate balancing act in Asia right now, as the influence of the United States under President Trump is waning, and China’s power continues to rise. At the summit in Singapore, Mr. Abe sought to shore up relations with Southeast Asian countries that are increasingly turning to China for economic aid and investment.

“Of course China is the rising power, and Japan as a sole power may not match the military or economic might of China,” said Hiroshi Nakanishi, professor of international relations at Kyoto University. “By seeking to get closer to allies in Southeast Asia and Australia,” he said, Japan is trying to create “a new international order.”

Friday’s visit to the memorial marked the second time in two years that Mr. Abe, who has been associated with right-wing historical revisionists who seek to play down Japan’s wartime atrocities elsewhere in Asia, paid a condolence visit to a World War II memorial.

Two years ago, Mr. Abe visited Pearl Harbor with President Barack Obama and offered repentance — but no apology — for the Japanese attack that destroyed the Pacific fleet in Hawaii and drew the United States into the war.

In Darwin on Friday, Mr. Abe bowed his head in silence for about a minute but made no remarks about the February 1942 attack by 188 Japanese aircraft that killed Australian civilians and American servicemen and sank 8 ships.

The visit to the memorial “closes the book on the past,” said Tom Lewis, a military historian who served for nearly 20 years as a Royal Australian Navy officer.

“Some of the Japanese who come here are shocked. Some have said: ‘We wish to apologize to you for the war,’” Mr. Lewis said of Japanese tourists who visit Australia. “And we say: ‘Thank you very much, but you didn’t do it, but thanks for saying that and we hope you have a good time here. You’re welcome, and pat a crocodile before you leave.’” 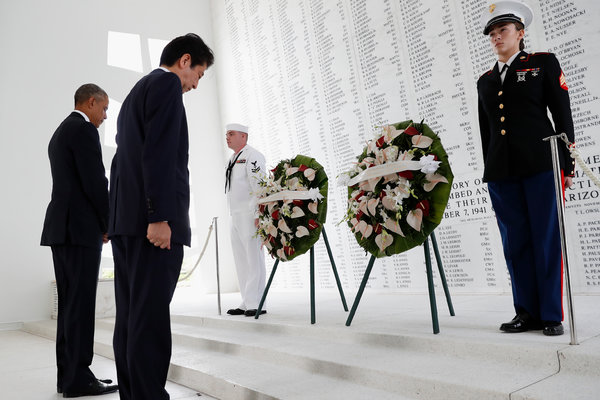 In remarks to reporters before meeting with Mr. Abe, Mr. Morrison described the Darwin visit as “an important time of healing” that “says a lot about the relationship between Japan and Australia.”

“We have a very similar outlook on how issues need to be managed in this part of the world,” Mr. Morrison added.

Both countries are clearly wary of China. Australia is concerned about China trying to exert undue influence in its politics. Japan, while tentatively warming to China with Mr. Abe’s recent visit to Beijing to meet President Xi Jinping, has made clear it will not concede on territorial disputes between the two countries.

Speaking to reporters, Mr. Abe said that he and Mr. Morrison “agreed that it’s important to encourage China to fulfill a responsible and constructive role in the international community. Japan and Australia are special and strategic partners to jointly lead peace and prosperity in this region.”

The two leaders discussed plans for Japanese forces to train in Darwin, where nearly 2,000 United States Marines rotate through each year. Mr. Abe’s visit signals to China that Australia may return to military exercises that Australia had previously pulled out of because China considered them a provocation.

The two leaders also discussed a liquefied natural gas pipeline built by the Japanese oil and gas giant INPEX near Darwin. The pipeline started production in July and is one of many infrastructure investments that Japanese companies have made around the region to compete with Chinese investments.

In Australia, the government has grown cautious about Chinese investment: Earlier this year it rejected bids by Huawei, the Chinese technology giant, and another Chinese company, ZTE, to provide equipment to support the country’s new fifth-generation telecommunications networks.

For its part, Japan, through military and economic cooperation with Australia, as well as billions of dollars in development aid to Southeast Asian countries, is hoping to keep the region from being pulled entirely into China’s orbit.

With China disregarding international laws in its military buildup in the South China Sea, Mr. Abe is trying to counter that “for the common public good for international security,” said Mr. Watanabe.

“But Japan cannot bear the burden by itself,” he said. “So it’s banding together with like-minded nations like Australia.”

Mr. Abe’s outreach to Australia may have touched off nerves in other parts of the region, particularly South Korea, whose people were once subjected to Japanese colonial rule.

His visit to the Darwin memorial comes just weeks after the South Korean Supreme Court ordered a Japanese steel maker to pay compensation to Korean men who were forced to work as laborers during World War II.

Mr. Abe called the judgment “impossible” and Japan’s foreign minister, Taro Kono, warned that if the South Korean government does not adequately respond to the decision, “the relationship between the two countries will be very difficult.”

“Abe has adopted a different attitude to the Asian countries that were trampled under Japan’s imperialism,” wrote Cho Ki-weon, Tokyo correspondent for the Hankyoreh, a liberal daily newspaper in South Korea. “He may visit Pearl Harbor or Darwin, but he has never expressed remorse or condolences during visits to the sites that Asians recall with grief.”

South Korea’s relationship to Japan is complicated by the fact that Japan not only committed wartime atrocities but also occupied Korea for 35 years. Although several former Japanese prime ministers have visited memorials to independence activists or cemeteries for war victims in South Korea and apologized, the wounds of history remain open and unresolved. Many South Koreans believe that Japan has not sufficiently apologized for its wartime misdeeds, including its treatment of so-called comfort women forced to provide sex for soldiers.

South Koreans believe Japan has been more contrite in its relationship to western victims of its wartime aggression.

“From a Korean perspective it looks like a kind of double standard,” said Lee Jong-won, professor of East Asian international relations at Waseda University in Tokyo.

In Japan, some of the public has grown weary of South Korean demands for further historical redress.

Historians of the region say such tensions closer to home have made the Japanese government realize how important the past remains as it negotiates its alliances in the present.

“It strikes me that the Darwin trip is an alliance management — ‘we’re going to contain China and maintain a large presence in the region’ where history is less important than the security issue,” said Alexis Dudden, a professor at the University of Connecticut who specializes in the modern history of Japan and Korea.

But Japanese officials may be failing “to calculate history as a weapon in the mix at moments like this,” Ms. Dudden added. “The alliance mangers most of all need Japan and South Korea to be working together and not slinging historical issues around.”

Children who are weak in mother tongue get a leg-up