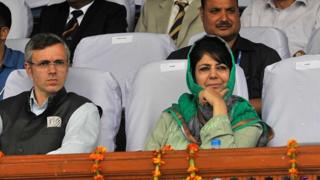 A dramatic day involving a broken fax machine and frenetic tweets, ended with the dissolution of the assembly in Indian-administered Kashmir.

An alliance of three rival political parties unsuccessfully tried to fax the governor’s office to stake a claim to form the government on Wednesday.

This prompted former chief minister Mehbooba Mufti to tweet at him instead.

Within an hour, the governor dissolved the assembly on the basis that the parties had “opposing ideologies”.

Local media quoted him as saying that it would be impossible to form “a stable government by the coming together of political parties with opposing political ideologies”.

Jammu and Kashmir has been under direct rule since June, when India’s ruling Bharatiya Janata Party (BJP) pulled out of an alliance with Ms Mufti’s regional People’s Democratic Party (PDP).

The state’s governor was put in-charge until a new coalition was formed or fresh elections were called.

Adding to the confusion, another politician, Sajjad Lone, also tweeted at the governor with his own claim that he had enough support to form the government.

He said that he too had faced a similar problem with the governor’s fax machine, causing much hilarity on Twitter.

Before the dissolution, Ms Mufti had tweeted twice at the governor, Satya Pal Malik, on Wednesday night, saying she had been trying to fax a letter to his office.

She attached the letter, which said that her party’s alliance with the national opposition Congress and regional rival National Conference (NC) provided them with the number of seats required to form the government.

Have been trying to send this letter to Rajbhavan. Strangely the fax is not received. Tried to contact HE Governor on phone. Not available. Hope you see it @jandkgovernor pic.twitter.com/wpsMx6HTa8

There have been rumours of a coalition between PDP and the opposition Congress party for some time but what has surprised many is that the alliance now includes the NC, the main opposition party in the state.

The two regional parties – PDP and NC – have always been at loggerheads.

Indian-administered Kashmir remains a subject of bitter dispute between India and Pakistan. Both countries claim the region in full and have fought two out of three wars over it. Tens of thousands of people have been killed in the conflict.

When the PDP, a pro-autonomy party formed in 1999, and the Hindu nationalist BJP allied to form the government in 2015, it was seen as a sign of hope for the region.

But the BJP pulled out of the coalition earlier this year, citing the “deteriorating security situation” in Kashmir.

Ms Mufti claimed that her party and the BJP differed on fundamental issues – she said the PDP believes in reconciliation, while the BJP insisted on following “muscular policies” which cannot bring peace to Kashmir.

Citing global slowdown, Fed sees no changes to rates in 2019

Singaporean among 3 missing while diving in Indonesia