Home » Asia » Finding your soulmate in the world’s biggest crowd

Manorama Mishra (72) and Girija Devi (68) are from two villages in northern India. Both lead lonely lives – Girija can go days without talking to anyone while Manorama’s life is an endless wait for a visit from one of her children.

Their lives take a happy turn, even if only for a month, when they arrive at the Kumbh Mela and find each other. Follow their journey from loneliness in this BBC 360 film – or scroll down to read their story. 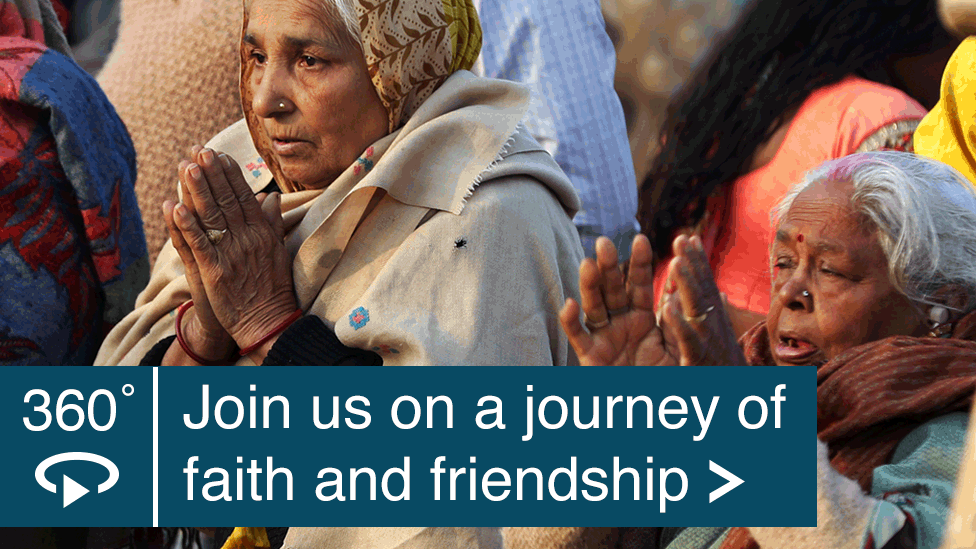 To watch 360 video, you will need the latest version of Chrome, Opera, Firefox or Internet Explorer on your computer.

On mobile – you will need to open the video in the latest version of the YouTube app for Android or iOS.

The Kumbh Mela festival, billed as the world’s largest gathering of people and held every 12 years, is known for its spectacular sights.

The mela (which means “fair” in Hindi) has been held in Allahabad city (recently renamed Prayagraj) at the confluence of the Ganges and Yamuna rivers in the northern state of Uttar Pradesh for centuries now.

But in the past two decades, it has grown into a mega event, with this year’s festival, which concluded in early March, billed as the largest ever – it’s thought up to 150 million people may have visited between January and March. The organisers say there were even more.

The kumbh is special to millions of Hindus because they believe bathing in the rivers will cleanse them of their sins and help them attain “moksha”, setting them free from the cycle of birth and death. 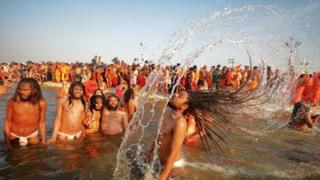 Sadhus – or ascetics – often draw most attention at the festival.

But a silent community of elderly people, known as Kalpawasis, live on the banks of the rivers for a full month, hoping to find salvation and spiritual fulfilment.

For these elderly pilgrims, the festival has taken on a meaning that transcends even its spirituality. It has become a place where they can meet people of their age and form life-long friendships. Some even call it the place where they “find family”.

Manorama and Girija’s friendship is one such story. They both arrived at the festival in late January, completely unaware that the other even existed. A month later, they were inseparable. 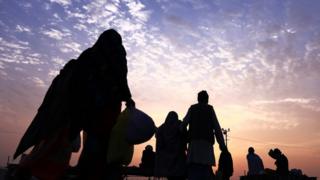 They say they met while Manorama was putting her things – a worn-out mattress, the idols of gods and some kitchen utensils – on the sand in her ramshackle tent. She had spotted Girija standing outside and looking on curiously.

“You may want put some hay underneath your mattress because the sand gets really cold in the night,” Girija said.

Manorama says she knew this but still nodded.

“Thank you for the advice. Where are you from?” Manorama asked. But by that time, Girija had started walking away from the tent. 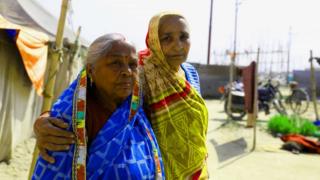 Manorama says she found this really odd, but just continued with her chores.

The next morning, they bumped into each other again while walking towards the Ganges to take a dip. Manorama asked her how she was doing – but instead of a response, just got a clueless look.

A few moments later, a common friend told Manorama that Girija had hearing difficulties and often forgot to wear her hearing aid.

At that point, all of them burst into laughter. This confusion marked the beginning of a beautiful friendship. 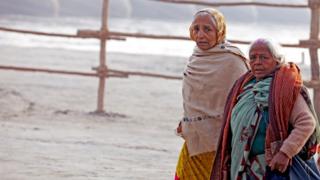 In the evening, the two got together to attend the colourful evening arti (prayers) on the banks of the Ganges.

They soon started following the same routine every day. A few days later, Girija asked Manorama to come to her tent for lunch.

The Kalpwasis eat only once a day and have to sleep on the floor – two of the many strict rules they have to follow to seek salvation. 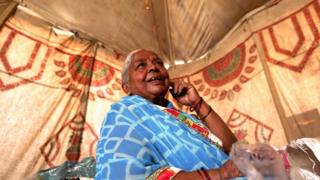 Girija was married at the age of 12 but two years later, her husband left her “because she was too short”. Her father took her back in, pushing her to continue her studies.

A decade later, she was offered a teaching job at her local school. She worked hard, eventually becoming the principal.

But when her father died 15 years ago, and she also retired from her job, she became lonely and felt isolated. She started spending most of her time praying.

So when somebody mentioned the idea of Kalpawas to her, Girija decided to do it.

Manorama says the story left her teary-eyed because she could relate to it. Her four sons work in cities and her three daughters are married, meaning that she lives alone. 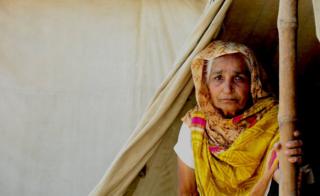 “I hate being alone. I don’t blame my children, they have to earn. But urban migration is making many elderly people in India’s villages lonely. It’s a problem, but nothing can be done about it,” Manorama said.

They finished eating lunch. And just before leaving the tent, Manorama said to Girija: “But now you have me, even if it’s just for month, you have a family.”

The rest of that month, they spent most of their time together.

They would start their day at 5am with a dip in the biting cold water of the river, followed by a long session of prayer. 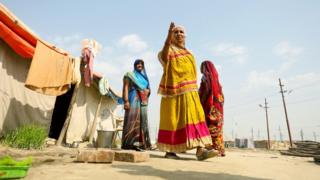 Their days passed by in happy routine.

Afternoons were always reserved for chatting and lunch together. Most evenings, they would walk to different gurus to listen to spiritual sermons.

Both of them had knee pain, meaning they couldn’t walk for very long stretches at a time. So they would stop at shops or at the tents of other Kalpwasis on the way.

“This is almost unbelievable for us. We don’t get to meet so many people in our villages. This festival is like the happiest old-age home in the world, and we cherish it so much,” Girija told me. 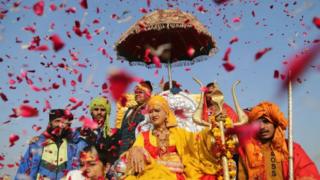 But they also knew all along that they were destined to part after their month together.

On the last day, they cried, hugging each other and promising to stay in touch.

“We are not crying because we are scared of going back to our lives. I have tears in my eyes because I won’t get see Manorama for a while. From this day, I will keep looking forward to coming to the Kumbh, or the Magh Mela which is held every year,” Girija said.

“I only wish that we had an old-age home near my village, so I can meet people. But I know that’s a big ask. So I will spend my time waiting to meet Manorama and my other friends soon.”

All images subject to copyright.

The government of Uttar Pradesh