SINGAPORE – Stallholders at hawker centres, food courts and coffee shops here are still only cautiously optimistic about the prospects for business once dine-in restrictions are eased for groups of up to five people from Monday (July 12).

More than 20 stallholders The Straits Times spoke with on Sunday said they were holding off on buying extra supplies or hiring extra help even though they expect more customers for lunch and dinner this week.

Ms Doreen Wu, 48, who operates the Tekka Homemade Yong Tau Foo stall at Tekka Food Centre with her husband, said that she would wait and see if the crowds returned in the coming weekend before buying more ingredients.

“Since dining in was opened for groups of two, we have seen more crowds on Sunday because migrant workers frequent the centre on their day off. Even though groups of five will be allowed now, we do not expect to see a sudden influx of diners since it is a weekday and most people are still working from home,” she said.

Like Ms Wu, other hawkers at Tekka Food Centre and Bukit Timah Food Centre (BTFC) said business had gone down by about 20 to 40 per cent since restrictions were tightened in May.

They hope to recover lost earnings in the coming weeks as more patrons trickle back to their stalls. 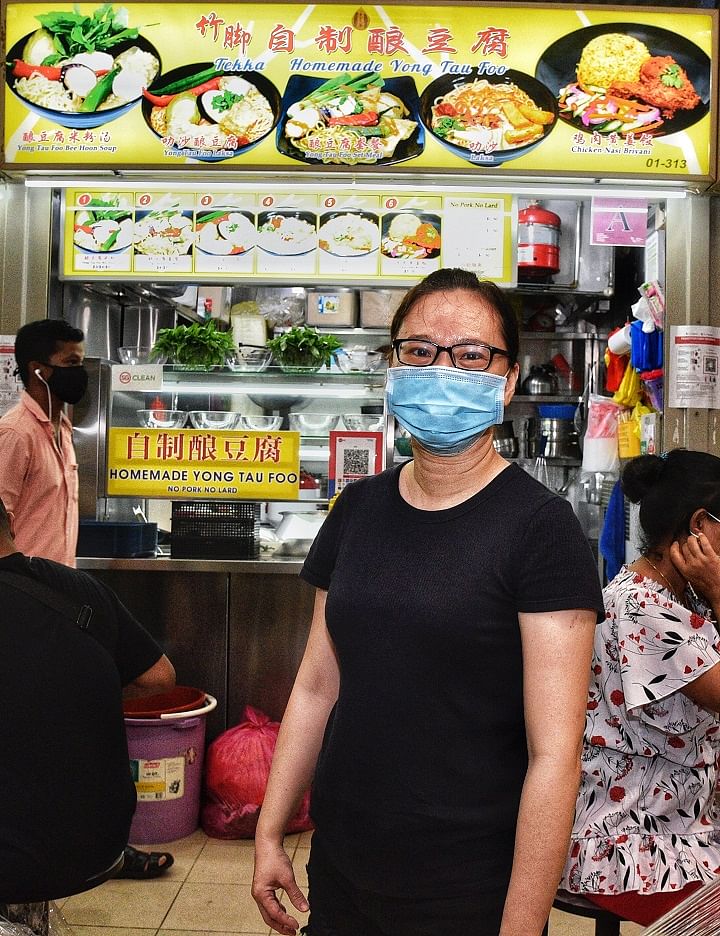 Mr Jet Lim, 49, who runs the Heng Heng Beef Hor Fun stall at BTFC, said business had been badly hit since the emergence of the Covid-19 cluster at the Bukit Merah View Market and Hawker Centre last month.

“Every time there’s a change in rules, business suffers. People stop coming because they hesitate whenever the rules change.

“When dine-in opened up for two people, we expected better business, but actually it got even worse. People are more scared now. Since the hawker centre’s seats are so limited, once families can hang out again, I think they will visit shopping malls rather than a hawker centre, as they know there are not many seats anyway,” he added.

Mrs Fitriyani, 43 who runs Selera Hidayah, a Malay cuisine stall at BTFC, and only wanted to be known by one name, expected more customers this week.

She said her dishes were better for dine-in rather than takeaway and more customers had patronised her stall since the rules were relaxed to allow dine-in for two people.

Stallholders at Newton Food Centre and Berseh Food Centre also did not expect business to improve in the coming weeks.

Hawkers at Newton Food Centre claimed to be the worst hit, with some saying they had suffered losses amounting to 50 to 80 per cent of their earnings when compared to before the circuit breaker.

Mr Ahmad Musthafa, 60, who runs Indian cuisine stall, Tawfeek’s Cuisine, at Newton Food Centre, said: “We have managed to stay afloat thanks to the rental waivers from the Government. Even if more people are permitted to dine together, we will still struggle to make ends meet as long as there are no tourists and office workers frequenting the centre.”

Mr Cheong Kum Chee, 69, who runs Hup Lee Coffee stall at Berseh Food Centre, did not expect more people to head down to the centre, which caters mainly to seniors and residents in Jalan Besar.

He said: “Even if business is poor, I know I do not have the strength or skill to change my livelihood now, so I will continue keeping my stall open for as long as I can.”

University student, Claire Neo, 21, is among those looking forward to social gatherings with friends and family as well as colleagues in the coming week.

“My friends and I feel more assured when dining out now compared to before because most, if not all, of us who are meeting up soon are already fully vaccinated,” she said.

7 rules that take effect from today

• Groups of up to five can dine in, but entertainment at food and beverage (F&B) establishments, such as live performances, recorded music and video screenings, will continue to be prohibited.

• Wedding receptions can resume with up to 250 attendees – pre-event testing is required.

• Indoor sports and exercise activities can be done in groups of up to five, with the cap on class sizes for both indoor and outdoor classes to be raised to 50.

• Social gatherings of up to five people at workplaces can resume.

• Businesses like F&B establishments and gyms will continue to receive 10 per cent wage support for another two weeks, until July 25.

• Mandatory Covid-19 testing for staff in higher-risk settings like F&B establishments or personal care services will start from Thursday.

• Antigen rapid test kits will be sold at supermarkets and convenience stores from Friday, and the cap of 10 test kits per individual will be lifted.