AUCKLAND, New Zealand — A Maori politician who says a necktie is “a colonial noose” showed up in New Zealand’s Parliament without one this week. He was promptly booted from the chamber, highlighting the tension between the vestiges of New Zealand’s colonial history and its Indigenous culture.

The politician, Rawiri Waititi, co-leader of the center-left Maori Party, instead wore a hei-tiki, a traditional pendant, around his neck in the chamber on Tuesday. In a heated exchange about the official dress code with Trevor Mallard, the speaker of the House, Mr. Waititi said he was wearing “Maori business attire.”

As he left the room, Mr. Waititi told Mr. Mallard: “It’s not about ties — it’s about cultural identity, mate.”

The whole episode, which resonated beyond New Zealand’s borders, prompted a subcommittee led by Mr. Mallard on Wednesday evening to debate whether the hei-tiki constituted business attire, and to consider abandoning the tie rule.

Nations in the region have wrestled with Indigenous issues for years, with some seeking to walk back or repair discriminatory policies encoded in their laws and traditions. To acknowledge that it is still struggling with a shameful past and the mistreatment of Indigenous people, Australia tweaked its national anthem last year to cut the word “young” from the phrase “for we are young and free” — a nod to the implicit exclusion of the Indigenous presence before the country’s founding. But the country still celebrates Australia Day, which commemorates the arrival of the British in 1788, while Indigenous people refer to it as Invasion Day.

New Zealand, for its part, has taken an assertive approach to engaging with its colonial past, and is one of the few countries with a treaty governing Indigenous land redistribution. For decades, New Zealand’s Indigenous people were prevented from honoring their traditions. But the Maori language — which New Zealand’s Indigenous people were long barred from speaking — is undergoing something of a renaissance. Maori greetings are now common in public broadcasting, road signs are increasingly bilingual, and many young Maori have enrolled in government-supported Maori language courses in a bid to reclaim their heritage.

But archaic rules and mores are still embedded in many aspects of politics.

In 2016, Nanaia Mahuta was the first woman in Parliament to display a moko kauae, a sacred facial tattoo. When Ms. Mahuta became the country’s foreign minister last year, a conservative New Zealand author, Olivia Pierson, criticized the tattoo as inappropriate for a diplomat, calling it “the height of ugly, uncivilized wokedom.” Ms. Pierson’s comments were swiftly condemned, and her books were pulled from at least one major New Zealand retailer. 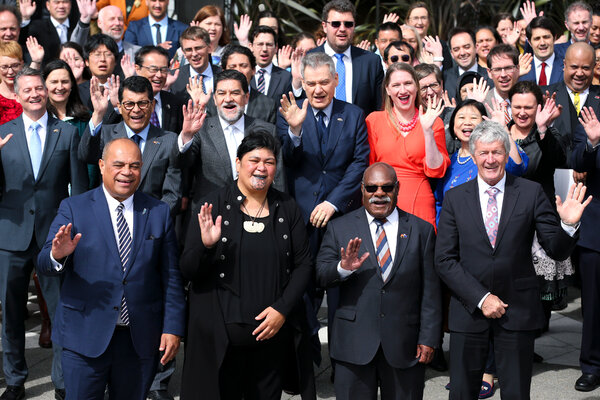 Maori make up about 21 percent of the 120-member Parliament across five parties. With his signature cowboy hat and a traditional full-facial tattoo known as ta moko, Mr. Waititi — one of two members of the Maori Party elected to Parliament last year — is a visible Maori presence in New Zealand’s halls of power. During his first speech to Parliament in December, he was asked to leave the chamber after he made a point of removing his tie, saying, “Take the noose from around my neck so that I may sing my song.”

Under parliamentary rules, male politicians have to wear jackets and ties in the debating chamber. Mr. Waititi was warned that he could be ejected again if he continued to violate the dress code. After leaving the chamber on Tuesday, Mr. Waititi wrote on Twitter, “We have made it known that this party will not be subjugated nor assimilated to dated colonial rules.”

In an op-ed article published on Wednesday in The New Zealand Herald, Mr. Waititi further cast his choice as a marker of resistance. “I took off the colonial tie as a sign that it continued to colonize, to choke and to suppress” Maori rights, he wrote. He did not immediately respond to an email seeking comment.

The requirement that men wear ties in the chamber dates to Britain’s colonial rule of New Zealand. (The equivalent rule was effectively scrapped in Britain in 2017.) Mr. Mallard, a member of Prime Minister Jacinda Ardern’s governing Labour Party, had been asked late last year to ditch the rule. But after consulting with members, Mr. Mallard told the local news media that there was “very little support for a change,” even though he “personally loathed” the practice.

Ms. Ardern has distanced herself from the neckwear dispute.

“It’s not something I have a particularly strong opinion on,” she told reporters on Tuesday. “There are much more important issues. I’m sure this can be resolved. I don’t think most New Zealanders care about ties.”

The necktie, which has its origins in the 17th-century cravat once worn as military garb, appears to be falling out of fashion in many parts of the world. In 2006, the Men’s Dress Furnishings Association, a 60-year-old trade group representing American tie makers, announced that it would be disbanding amid declining sales.

By Wednesday afternoon, a temporary truce appeared to be in place when Mr. Mallard, the House speaker, allowed Mr. Waititi to ask questions in Parliament without a tie around his neck.

Later that evening, Mr. Mallard announced that the tie rule was no more.

“The committee did not reach a consensus, but a majority of the committee was in favor of removing the requirement for tie,” Mr. Mallard wrote in a statement. He concluded: “As Speaker, I am guided by the committee’s discussion and decision, and therefore ties will no longer be considered required as part of ‘appropriate business attire.’”

In show of unity, Malaysia's PM Muhyiddin holds meeting with all his PN alliance chiefs

Coronavirus: What state of emergency in Indonesian capital, provinces means