TIRIN KOT, Afghanistan — When the war engulfing southern Afghanistan reached Sayed Mohammed’s doorstep, he resisted the urge to abandon his home. When Taliban fighters looted his chicken farm, he still refused to leave.

But the birth of his fifth child, a daughter, changed his mind. Named Halima, she was born amid a raging battle a couple months ago, with explosions shaking the walls of the family farmhouse on the rural outskirts of the city of Tirin Kot.

The blasts were so intense that Halima’s 4-year-old brother, Saber, developed stress blisters on his lips that began to bleed. Terrified, he crawled inside his father’s shirt to seek refuge.

Shortly after, Mr. Mohammed took his wife and young children and left with just what they could carry.

“She was born in such circumstances that I don’t wish upon any human,” Mr. Mohammed said of Halima, now wrapped in blankets in the corner of the dark, cold room that they rent. It is only about a 10-minute walk to this room from the family farmhouse, but with the old neighborhood now a battle front, it might as well be a world away.

“I was lost,” he said of the decision to leave his home and the farm, with 4,500 chickens, that he had taken out large loans to finance. “I didn’t know whether to stay with my suffering wife, or to take these other children to a safer place.” 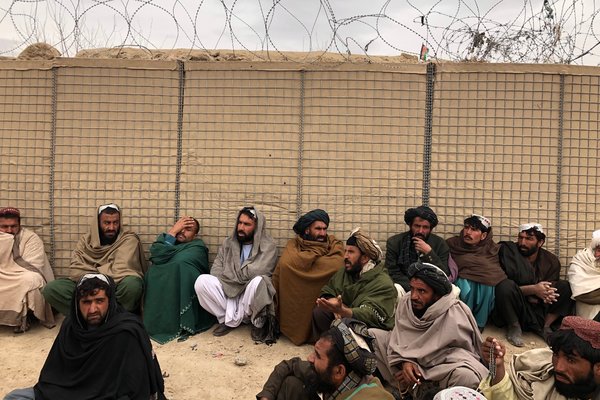 As American diplomats push for a peace deal with the Taliban to end the 18-year war, a strong voice of protest, largely coming from urban centers, has been cautioning against a rushed deal that could endanger some of the gains of past years. Those include women’s right to work and education, as well as an independent news media.

On the other hand, however, is the nearly half of the country that is caught between the two sides of the seesawing conflict. The constant fighting has deprived these rural Afghans of most of the improvements — schools and institutions — at the center of concerns over peace negotiations. And the voices of those Afghans are notably underrepresented in the debate.

To this large part of Afghan society — including more than a million people displaced by fighting at least once, and often several times — there is a desperate urgency for any sort of peace deal, or even just a truce to allow aid to come through. They are focused simply on survival.

“I have no prejudice against anyone — not with the Taliban, not with the government,” Mr. Mohammed said. “I would be happy if they made their peace, if they declared their cease-fire. All we want is our houses to be freed again so we could return.”

The peace efforts are unfolding amid a humanitarian crisis, where displacement by war is being made worse by a harsh drought. About 13.5 million people are surviving on one meal or less a day, and 54 percent of the population lives below the poverty line of a $1 a day, according to Toby Lanzer, a United Nations humanitarian coordinator.

Aid groups have been trying to see if they can use the Taliban’s engagement in peace discussions to open access to large swaths of the population in dire need of assistance. Humanitarian-aid access is needed to build trust among aggrieved Afghans, they say.

“People rightly feel so marginalized that they become angry — that fuels conflict,” Jan Egeland, the secretary-general of the Norwegian Refugee Council, said in an interview during a visit to Uruzgan Province, where Tirin Kot is the capital. His group is the only international aid organization with a presence on the ground in Uruzgan.

“We are now failing,” he said. “All of us are failing those who are at their greatest need.”

Mr. Egeland lamented the fact that aid distribution has fallen in recent years, just as the need has gone up. The Norwegian group’s surveys showed that in 2012, about 50 percent of displaced Afghans received aid — and that five years later, that number had dropped to 25 percent.

He said he feared that the end of the conflict could send “European countries rushing for the exits” just as the true devastation of the long war comes into clear view. (Of the $612 million required by aid agencies in Afghanistan in 2019, only $14.2 million has been donated so far, the United Nations said at the end of February.)

“Countries that have been involved in waging war must not turn their backs on the civilians who have borne the brunt of 40 years of violence,” Mr. Egeland said.

Matiullah Wesa, an education activist who has traveled across Afghanistan for a bottom-up study of children deprived of school, said that nearly 150 of the country’s 400 districts had not produced a single female graduate in the past 18 years. About 50 of those districts did not produce male graduates, either.

Many of the schools that were built in the early years of hope after the Taliban government was toppled have been shut down or destroyed in combat.

The Assad Suri school in the Zhare district of Kandahar Province, built in the early years after the United States invaded, has been occupied by every side of the conflict since. Schools in some areas are often taken over by armed men because there is little other usable infrastructure.

Kabir Ahmad, a biology teacher at the Assad Suri school, which has 280 students, said he was a student when the Taliban took over the school, forcing his family to relocate.

The insurgents were then pushed back by American airstrikes, and then American forces occupied the school. After a stint of occupation by the Afghan Army, now the Afghan police have an outpost in part of the school. Its classrooms are mostly damaged, lacking doors and windows, and its walls are riddled with bullet holes.

“When it rains, we take the students to tents,” said Mr. Ahmad, who completed school in the city of Kandahar before returning to teach biology.

The United Nations says that about 1.5 million Afghans are internally displaced, largely by conflict but also by the recent drought. In large parts of the country, the displaced families have been forced to move over and over again. Even when there has been a lull in the fighting, returning home is impossible because of land mines.

Mohammed Salem, who arrived in Zhare district from neighboring Helmand Province five months ago, said that in addition to Taliban land mines, regular government raids and bombings against the insurgents also put civilian lives at risk.

“In the past, it would be clear where the fighting would happen,” Mr. Salem said. “Now, the lines are not clear. It could happen anywhere.”

Asked how many times he had been displaced, a bitter smile took over his face.

“I have lost count,” he said. “I don’t even know how many times we have moved houses over the past five months that we got here.”

Mr. Mohammed, the farmer now sheltering with his family in Tirin Kot, is still about $20,000 in debt from the chicken farm they had to leave behind.

One cruelty particularly pains him: If he climbs to the roof of their room and squints, Mr. Mohammed can see his own demolished farmhouse — just a short away, but entirely out of reach.

Inside the alternative reality of ‘sovereign citizens’