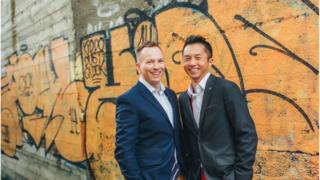 Hong Kong’s top court has ruled in favour of a gay civil servant applying for spousal and tax benefits for his husband, in the latest victory for the city’s LGBT community.

But back in Hong Kong, Mr Adams was unable to access the benefits civil servants’ spouses are entitled to.

The couple later sued the government, starting a four-year-long lawsuit.

Same-sex marriages are not recognised in Hong Kong although discrimination based on sexual orientation is illegal.

“Love will ultimately win,” Mr Leung told BBC Chinese upon hearing the ruling. “We have been fighting for more than four years…[but] it’s only a small step for Hong Kong’s LGBT rights.”

‘How will it weaken the institution of marriage?’

Mr Leung first took the government to court in 2015 after they refused to grant Mr Adams spousal benefits, and after Mr Leung was barred from filing a joint tax return – something married heterosexual couples can do.

In 2017, the Court of First Instance sided with Mr Leung, but this decision was later overturned by the Court of Appeal.

In a ruling released on Thursday, the Court of Final Appeal ruled that it was discriminatory to bar Mr Adams from his benefits, adding that the ruling did not weaken the institution of marriage in Hong Kong.

“How is it said that allowing Mr Adams medical and dental benefits weakens the institution of marriage in Hong Kong?” said the ruling by Chief Justice Geoffrey Ma and four other judges.

This is the second time a Hong Kong court has offered some form of recognition to same-sex marriages.

Last year, the same court, the Court of Final Appeal, ruled in favour of an expatriate woman who won the right to live and work in Hong Kong with her wife.

Both historic rulings will presumably make it more difficult in future for the government not to recognise same-sex marriages that are legalised overseas.

Coronavirus: Staff at PCF cluster were at work while sick, experts urge people to stay home unless 100% well

European shares fall after three-day rally, but mark best week since 2011
We and our partners use cookies on this site to improve our service, perform analytics, personalize advertising, measure advertising performance, and remember website preferences.Ok