Home » Asia » Hong Kong Is Dangling Incentives to Get Vaccinated. That May Not Be Enough.

Incentives to get vaccinated against Covid-19 are multiplying in Hong Kong, from the government as well as businesses eager to begin their recovery.

But the Chinese territory, which has largely kept the coronavirus under control, is now struggling with a sluggish inoculation campaign that officials worry could leave it vulnerable to an outbreak like the one currently faced by Taiwan, another one of the pandemic’s early success stories.

Experts warn that the incentives in Hong Kong may do little to allay the anxiety and confusion underlying people’s vaccine hesitancy, and that other solutions are urgently needed before Hong Kong faces a “fifth wave” of infections.

Because it takes several weeks from first dose to full inoculation, “if you just sit and wait and hesitate, we may not have the time to protect us when the fifth wave suddenly arrives,” said Dr. Alvin Chan, co-chairperson of the Hong Kong Medical Association’s advisory committee on communicable diseases.

While other parts of Asia, like India and the Philippines, face dire vaccine shortages, Hong Kong has secured enough doses to cover its population of 7.5 million. The shots are free but not compulsory, and residents have two choices: the vaccine developed by Pfizer and BioNTech, or the one developed by Sinovac, a private Chinese company. Vaccination is available to everyone 16 and older, and on Thursday the health secretary approved the Pfizer-BioNTech vaccine for children as young as 12.

The vaccination campaign began in late February, with a goal of inoculating 70 percent of the population in order to reach herd immunity. Only then, officials said, could Hong Kong reopen to the world after almost fully sealing its borders to nonresidents for more than a year.

That goal seems increasingly out of reach. As of Thursday, about 19 percent of the population had received at least one dose of a Covid-19 vaccine, and 14 percent had been fully vaccinated. That is compared with 31 percent who are fully vaccinated in Singapore, another Asian financial hub, and 41 percent in the United States. It also stands in contrast to mainland China, which is vaccinating people at a rate of more than 17 million a day.

“I’m afraid the vaccination rate in Hong Kong may not be even above 30 percent by the end of the year,” said Dr. Paul Chan, chairman of the microbiology department at the Chinese University of Hong Kong Faculty of Medicine.

Alarmed officials are now trying everything they can to nudge residents toward vaccination centers. On Monday, they said that in the event of a fifth wave, “high-risk” venues like restaurants, movie theaters and schools could be restricted to people who are vaccinated. Some groups like construction workers who are required to submit to regular testing if unvaccinated now must pay for the tests themselves. With almost two million unused doses of vaccine, some of which expire in August, the government is considering selling or donating them elsewhere and delaying future shipments.

Both the public and private sectors are also trying more positive reinforcement. Civil servants have been granted one day off work for each dose, with similar policies adopted by HSBC and other major banks at the government’s urging.

Last week, the Airport Authority said it would give away 60,000 plane tickets to Hong Kong residents and airport staff who get vaccinated by the end of September. A few days later, property developers announced they would hold a lottery, open to all fully vaccinated permanent residents 18 and older, for a one-bedroom apartment worth $1.4 million (total area: 449 square feet). In a city that has long struggled with affordable housing, this was an attention-grabbing move. 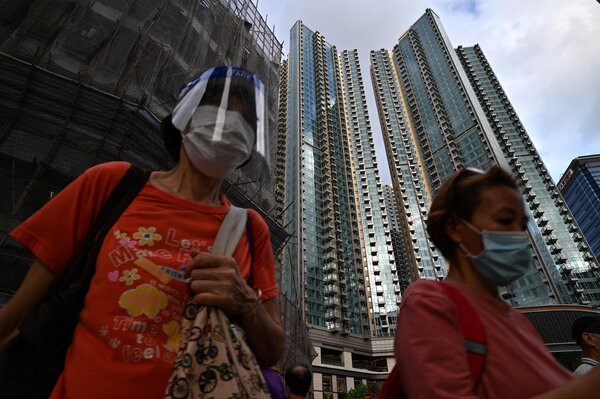 Cathay Pacific, the city’s flagship carrier, added to the prizes on Thursday with a private flight around Hong Kong for one winner plus family and friends, all of whom must be fully vaccinated.

Vaccinations have increased since the apartment lottery and other incentives were announced, with the seven-day average up about 20 percent over a week ago. But the enthusiasm may not last, researchers say.

A recent survey of 1,200 people by the Chinese University of Hong Kong found that of those who had not been vaccinated, only about a quarter planned to do so in the next six months.

The problem was not so much the idea of a vaccine — almost two-thirds of respondents agreed that vaccination was the most effective way to fight the virus. More than half even supported making it mandatory for certain groups like police officers and firefighters, as well as foreign domestic helpers, who have faced greater discrimination during the pandemic. But when it came to getting the shots themselves, most respondents had doubts.

The No. 1 reason is reports of people dying soon after they receive the vaccine, said Dr. Paul Chan of CUHK, who was involved in the survey. There have been more than 20 such deaths in Hong Kong, none of which have been tied to the vaccines. Reports of temporary facial paralysis and other conditions among recently vaccinated people have also been widely covered in the local news media. The suspension of Pfizer-BioNTech shots for 12 days this spring because of packaging defects further stoked worries.

Fear of adverse reactions is especially strong among older residents, with government statistics showing that less than 4 percent of those 80 and older are inoculated.

“I haven’t been vaccinated yet because some newspaper stories claim that old men suddenly passed away after being vaccinated,” said Stanley Chan, a 76-year-old retiree. “That’s why I want to wait and observe the situation.”

The perceived risks of getting vaccinated loom even larger when the risk of contracting the virus seems so low by comparison. Like other parts of Asia, Hong Kong closed its borders early and introduced strict measures that, despite periodic outbreaks, have kept cases to a minimum. The city, which reported zero new local cases on Thursday, has recorded fewer than 12,000 coronavirus infections and 210 deaths.

“It’s just not that urgent,” said Kitty Yue, 24, a company clerk. “I want to wait for now and make sure the vaccine safety is OK.”

The second biggest reason for hesitancy that university researchers found was a lack of trust in government recommendations. Although the survey did not get into specifics, the public’s relationship with the Hong Kong government was greatly damaged by a 2019 protest movement over China’s tightening grip on the city that has since been suppressed. These days, that distrust can extend to the government’s public health advisers, Dr. Chan said.

The other top reasons cited in the survey were the desire to wait for a “better” vaccine and distrust of vaccine manufacturers or manufacturing locations.

Residents said winning the apartment was too unlikely to make it a strong motivator, and that if they did get vaccinated, it would be for their own health, not for money.

“The government should let people know the vaccination is for their personal interest and for people they love around them,” said Tom Lee, a 70-year-old retiree who said that was why he had gotten vaccinated. “Rejuvenating the economy for the government? What does that matter to you?”