HONG KONG — The Hong Kong police on Saturday charged at protesters with batons and fired tear gas, and demonstrators threw gasoline bombs at officers, signaling a return to violence in the territory after a period of relative calm.

Before officers in riot gear charged at a crowd in the district of Kwun Tong, in eastern Kowloon, antigovernment demonstrators had used bamboo rods and other objects to put up barricades outside a police station. Some protesters had pulled down and dismantled lampposts that they said contained high-tech surveillance equipment. 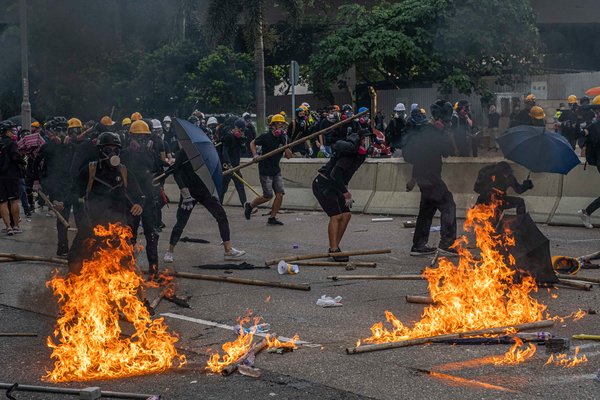 “We don’t want to be monitored — we want human rights,” said Calvin Wong, a 24-year-old protester. “Maybe people in the mainland accept this, but people in Hong Kong will not.”

In a statement, the police said that protesters had started fires and hurled bricks at officers, and that the use of force had been required to disperse the crowd. Protesters threw gas bombs outside a nearby shopping center, and the police responded with rubber bullets and tear gas.

The Hong Kong protests began in early June over an unpopular bill that would have allowed extraditions to mainland China. The proposal has since been shelved, but not fully withdrawn as protesters want. Demands have expanded to include other issues, such as amnesty for arrested protesters and an investigation into police violence.

The police had granted authorization for a march in Kwun Tong on Saturday — the 12th straight weekend of demonstrations. But at midday, Hong Kong’s subway operator halted train service along a stretch near the protest route, forcing those who wanted to join the rally to walk from more distant stations.

The subway operator said the move had been intended to ensure the safety of passengers and employees, but supporters of the protest movement called it a concession to pressure from Beijing.

Chinese state-run news outlets criticized Hong Kong’s rail operator this past week for sending trains to take protesters home after a standoff with the police at a subway station late Wednesday.

That night, after a rally at the train station in the satellite town of Yuen Long, a large crowd of demonstrators barricaded themselves inside the station as officers with riot gear approached. The protesters heckled the officers and shined laser pointers at them, and the scene grew tense.

But after an hour or so, station employees began announcing that trains were coming to take demonstrators back to the city. The protesters started moving away from the barricades and boarding the trains. There was no violence.

On Thursday, however, state news media in mainland China accused Hong Kong’s subway operator of “acting hand in glove with the rioters.”

“Once violence is indulged, then public safety is no longer being taken seriously,” read an article in People’s Daily, the official Communist Party newspaper.

Prices of fruit, vegetable and fish remain stable, not affected by Malaysia lockdown

Kuenssberg and Peston shut down by Boris over Cummings’ probe – ‘People need to focus!’