SINGAPORE – When Australia began a nationwide shutdown in March last year as the pandemic there worsened, First Warrant Officer (1WO) Sukhwinder Singh had to adjust to Covid-19 measures in Queensland, where he is based.

The Republic of Singapore Air Force (RSAF) air crew specialist, who is part of the Oakey Detachment, had to take care of his two children at home after his daughter’s kindergarten decided to close and his son’s school implemented remote learning.

At work, precautions were also taken by the Chinook helicopter detachment, such as sanitisation multiple times a day, compulsory wearing of masks and safe distancing measures. Meetings went virtual.

“Our family back in Singapore was also worried about the situation here, so we had to assure them, take care of the kids who were at home, and do only the essentials like buying groceries and seeing the doctor,” recalled 1WO Singh, 41.

Still, amid the pandemic, the 90 or so RSAF personnel from Oakey Detachment have kept up training standards and interactions with their Australian counterparts, said members of the detachment who spoke to The Straits Times recently.

They are based in the Australian Army Aviation Training Centre in Oakey, although they live in the city of Toowoomba, about a 30-minute drive away.

The detachment has been operating the CH-47D Chinooks at the centre since August 2018.

Detachment commander Jimmy Neo said the measures taken have been successful in keeping the detachment safe. No one there has been infected with Covid-19.

The training airspace in Oakey – 17 times the size of Singapore – offers airmen the opportunity to conduct complex and multi-aircraft training missions on a regular basis, said Lieutenant-Colonel Neo, 40, who took over as commander in October last year.

“We thank the Australian government and our Australian Defence Force (ADF) counterparts for their unconditional support of our training requirements in Oakey,” he said.

“Recent participation and training such as in Operation Bushfire Assist last year, as well as the deck landing practice with the Royal Australian Navy, reflect the close and longstanding defence relations between the RSAF and ADF.”

Last October, as part of the deck landing practice, an RSAF Chinook made its first-ever landing on the landing helicopter dock ship HMAS Adelaide in the waters off Townsville.

“We were very appreciative of the assistance and this close relationship that we have with them, for their willingness to drive two hours each way just to give us a two-hour briefing,” he said.

For air force engineer Elaine Tan, her most memorable moment was being caught in a heavy thunderstorm on the way to Townsville on a Chinook for the practice. The team had been worried they could not make it on time. 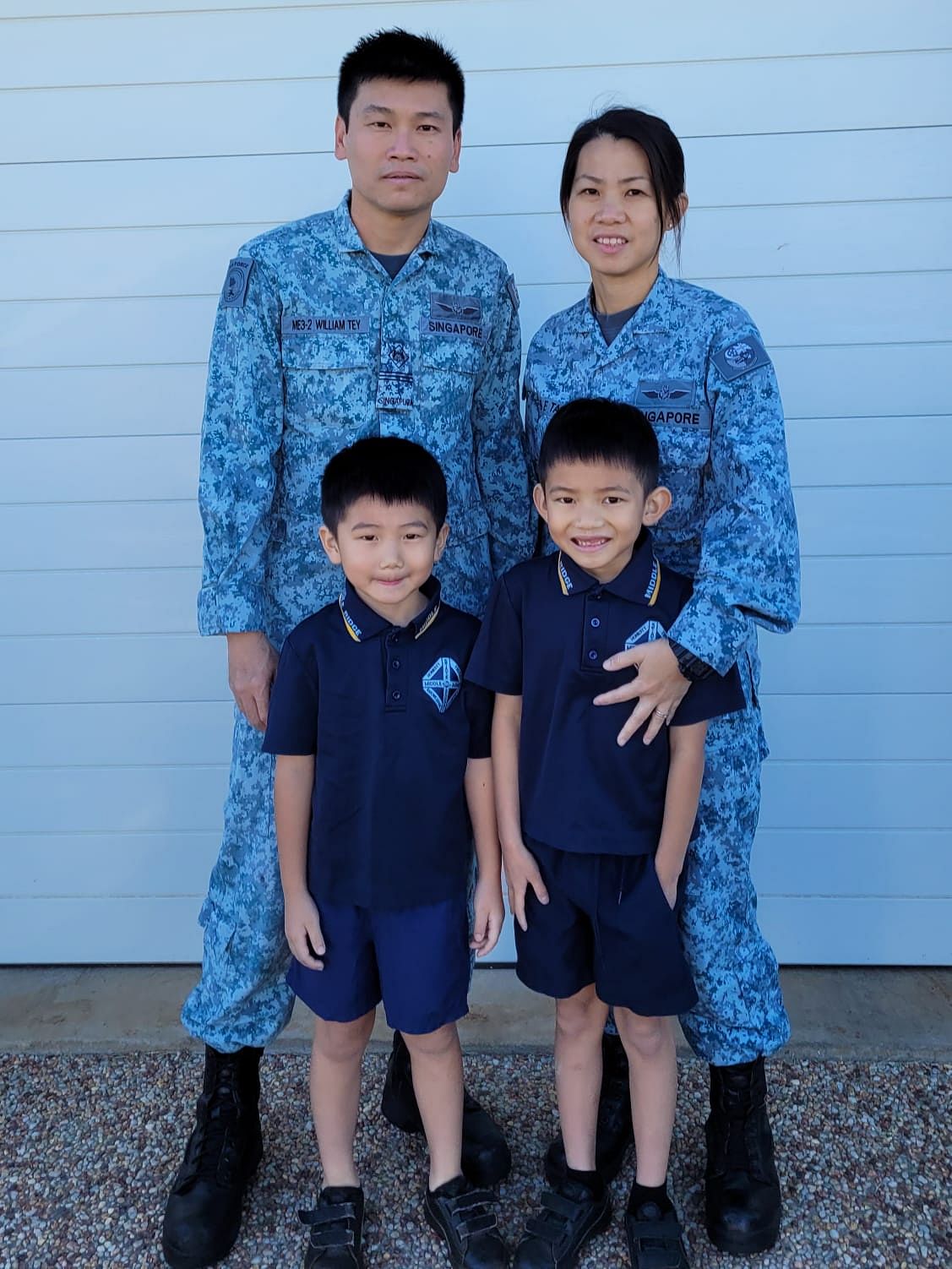 “But once the weather was getting better, my team of air force engineers put in our best effort to get the aircraft ready with the post-thunderstorm checks and inspection,” said Military Expert 2 Tan, 40, whose husband, also an air force engineer, is also posted there.

While being based overseas has its challenges, the detachment has learnt to adapt.

For instance, ME2 Tan’s parents-in-law moved over to help the couple look after their two children, aged five and seven – something she is grateful for.

1WO Singh, whose two children are aged 10 and five, said he remembered clearly that it was winter when he arrived in Australia in June 2019. “A memorable moment was when my family and I walked out of the airport, and my son asked me, ‘Dad, why is the air-con on outside?’. It was just winter and I had to explain that to him.”

LTC Neo said that while Australia still has border restrictions, its government has been supportive of RSAF personnel being posted there for training, and deployment cycles have not been affected.

To show appreciation to the local community, whose airspace the detachment uses on a daily basis, they used to take part in an open house that the airbase held every year before Covid-19. More recently, a detachment Chinook took part in a flypast as part of Anzac Day celebrations two Sundays ago.

The detachment has also taken part in other activities, such as the Oakey Together Parade in July 2019, where they marched alongside their ADF counterparts to commemorate 50 years since the Australian Army Aviation Corps moved to Oakey.

LTC Neo assured Singaporeans that the detachment is doing well.

“We have instituted the required and stringent safe management measures here in Oakey so that we are still able to conduct our training safely in this uncertain time of Covid-19,” he said. “We will maintain our operational readiness so that we can always achieve mission success in any operation when the time calls for it.”

Woodlands Regional Library closed due to burst pipe, to reopen on Tuesday