Home » Asia » How the Tiananmen Massacre Shocked, Then Inspired a Chinese Political Cartoonist

BEIJING — The political cartoonist Badiucao still remembers the sultry Shanghai afternoon when he stumbled upon a video about the Tiananmen massacre of 1989 — and his world turned upside down.

It was 2007, and he and his law school roommates had been watching a pirated movie when suddenly it cut to a documentary that was apparently spliced in. The three-hour film first showed crowds of young Chinese holding pro-democracy banners in Beijing’s Tiananmen Square. Then Chinese army tanks rolled into the city and troops began firing on the people.

During the military campaign, which began on the night of June 3 and ended the next day, hundreds or maybe thousands were killed. 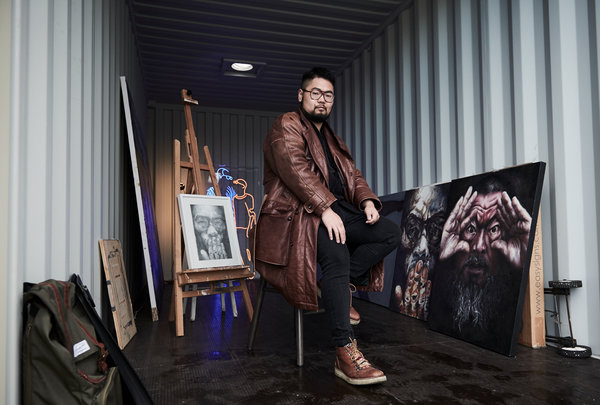 The four roommates, all in their early 20s, sat in the dark, speechless. Until that moment, Badiucao recalled, he had been just another good, apolitical kid from a working-class Shanghai family. He was only 3 years old during the crackdown, but seeing the soldiers turn their guns on the students and civilians, he said, felt personal, like “dropping from heaven to hell.”

The student protesters had been so young and carefree, he thought, he could easily have imagined himself there. Questions began racing through his mind: Why had he not learned about this before? What were the names of the victims? Was it even real?

“We were always told that this is a new era, we have left history behind and we have a good life,” Badiucao said in an interview from Melbourne, Australia, where he now lives. “But seeing the documentary made me believe that China was the same and under the control of the Communist Party, it would never change.”

Badiucao’s political awakening explains to a degree why the ruling Communist Party goes to great lengths to quash discussion of the Tiananmen massacre, which could undermine its legitimacy. Badiucao is also an example of how some young Chinese — who are better educated and expect a fairer and more just society — are willing to take action in pursuit of such ideals, as have a group of Marxist students whose fight for labor rights has run into trouble.

In the decade since that life-changing afternoon, Badiucao (pronounced bah-diyoo-tsow) has tried to hold power to account through his satirical cartoons. He uses bold colors and images that are loud — sometimes vulgar, critics say — to take on everything from the Chinese leadership’s authoritarian tendencies to the complicity of Western companies in Chinese censorship.

The cartoonist first gained popularity by posting his work under the randomly chosen pseudonym “Badiucao” on the Chinese social media site Sina Weibo. But the authorities in China moved quickly to limit his reach, and by his own count, his social media accounts have been shut down 37 times over the years. His main social media platform these days is Twitter, which is blocked in China.

In one of his cartoons, called “Tiananmen Mother’s Day,” an elderly woman bends over to plant a red rose into a tank. Another features a simple line drawing of Liu Xiaobo, the Chinese intellectual and Nobel Peace laureate who helped negotiate an exit for student protesters in 1989 and later died in prison, and his wife, Liu Xia.

For a performance art piece marking the 29th anniversary of the crackdown last year, Badiucao called on people around the world to pose as “Tank Man” — the iconic and unidentified figure who confronted a column of tanks and has since become a symbol of peaceful resistance in the West. From Paris to Washington to Hong Kong, images of people dressed in Tank Man’s signature outfit — a white shirt and black pants with a white bag in each hand — began circulating online under the hashtag #TankMan2018.

In an interview, Zhou Fengsuo, an organizer of the Tiananmen protests who also took part in the performance art piece, called Badiucao’s work “very courageous” and “important to the collective memory of Tiananmen.”

Xiao Qiang, founder of China Digital Times, which tracks Chinese media, said that the constant censorship of Badiucao’s cartoons was a testament to the power of imagery, particularly among young people.

“Unlike long theoretical articles, a good satire or cartoon has the potential to reach millions of young people,” said Mr. Xiao, whose website has published many of Badiucao’s cartoons. He also said the censorship suggested a deep-seated insecurity within the Chinese Communist Party that “the dictator cannot be laughed at.”

Until recently, Badiucao worked under complete anonymity. After finishing law school in Shanghai, he moved to Australia where he eventually obtained citizenship and got a job for a few years as a preschool teacher. He went to great lengths to hide his identity for the sake of his own safety and that of his family back in China; no one, not even his colleagues or his parents, knew that he was moonlighting as a dissident cartoonist.

“During the day, I worked, changed nappies and sang lullabies to the kids,” he said. “At night, I became a fighter in my little room, going through all the news of the day to find a topic to address with my pen.”

Badiucao now works on his art full time. But last November, just days before the opening of his first solo exhibition in Hong Kong, he learned that the authorities in Shanghai had uncovered his identity and approached several of his family members. They were asked to pass on a message to Badiucao: Cancel the show, or there will be trouble.

Together with the exhibition organizers, Badiucao eventually decided to call it off.

“I’m not brave, I call myself the most coward of the world’s dissident artists,” he said. “I choose to keep my identity hidden as much as I can while also making some noise with my art.”

Raw, fried or on a bun: Japan's whale meat proponents reassured by restart of commercial whaling