SINGAPORE – I don’t like to brag, but I think JJ, my soon-to-be four-year-old daughter, is a little bit of a genius.

So, I have no doubt that my young progeny is very smart.

I’m also sure that most parents quietly feel the same way. (About their own children, that is, not about JJ – but they’re more than welcome to think JJ is a genius if that’s what they want.)

They don’t usually declare it so publicly, but I believe most parents have, at some point, thought their children so ridiculously clever that they ought to be accepted as members of Mensa. They might even believe that their kids will eventually grow up to put an end to the three big things that plague modern civilisation – global poverty, Third World hunger and parental humblebragging.

But here’s my theory. Parents think their offspring are acutely intelligent, primarily because they are watching them grow on a daily basis. What these toddlers couldn’t do just yesterday, they magically can do today. They assume they have acquired these new skills or abilities overnight, at a rate that only geniuses are wont to do.

The truth, though, is probably a lot less sensational. These skills had probably been surreptitiously brewing in their burgeoning brains for months, waiting to make a grand entrance some time between their afternoon nap and a cunning candy plea.

Because, truth be told, these new skills aren’t all that impressive if you think about it. Sure, if you ask their grandparents, they will tell you these capabilities are the hallmarks of a genius in the making. But if you want an objective opinion about whether or not such milestones are indeed significant and not merely meaningful to biased fathers and partial grandmothers, you can always conduct the “Tell It To Someone Who Isn’t Related To You” test (the TITSWIRTY test).

Here’s how it works. You pick a random person in your sphere of acquaintances as your test subject – a colleague, a Facebook friend or a neighbour’s second cousin from his stepmother’s side – and proceed to recount to him what you deem to be a display of ultra- intelligence from your young child.

Parent: So, you know, my three-year-old daughter can spell her own name.

Parent: Yeah… all by herself.

Parent: Her name is Alexandrinalyn, by the way.

Parent: Yeah, it is nice. It’s very nice… Did I mention she’s three?

By now, the parent is probably thinking this person wouldn’t be able to recognise a genius if she came up from behind and bit him on his Dark Matter.

Meanwhile, the TITSWIRTY test subject is thinking: Do I even know you? 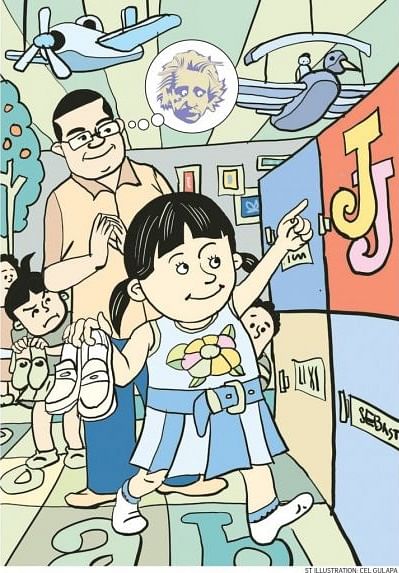 I remember the first time JJ recognised her name on a sticker pasted on her school’s shoe locker – you could have sliced my beam of pride with a cleaver.

She was on her way to nursery class and had just removed her footwear.

Meanwhile, I stood behind her repeatedly exhorting her to find her spot in the shoe locker, marked by a sticker with her name on it.

“Where should you keep your shoes, JJ? Can you find your name anywhere here? No? Are you sure? It’s okay, it’s okay. Keep trying.

“I mean you’re not right because you’re still looking to your left.”

After a mini exposition on the subtle differences between “left”, “right”, “up”, “down” and “diagonally across from Robyn’s shoe locker”, she eventually slipped her shoes into the spot with her name on it.

In my head, my genius of a child had just pieced together a string of arbitrary Germanic symbols to decipher her own moniker, then meaningfully reconciled it with her own identity and sense of self.

Such a clever girl.

In her head, however, she probably saw the letter “J” and thought she liked the curly bit at the bottom and so decided to shove her shoes in there, mostly in the hope that Daddy will finally stop yelling confusedly: “Your right. Your right. Not you’re right.”

Young JJ might have some way to go before she sorts out her right side from her left, so we won’t be pinning our hopes on her becoming a successful air-traffic controller any time soon.

In fact, at this juncture, I concede that she will have some way to go before she can go on to eradicate poverty or hunger in the world.

But one thing I know for sure. She’s on track to decimate one parent’s humblebragging.

• Raymond Goh is a father of one and a publishing director at SPH Magazines.

Drug offence executions more than halve in 2018 after Iran reform