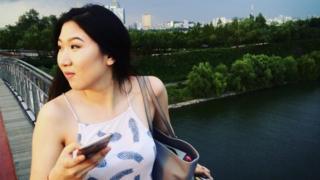 A South Korean church which believes global famine is imminent has set up base in Fiji, where it’s gained considerable influence but faced growing allegations of abuse. One woman who fled what she believes is a cult told the BBC’s Yvette Tan she lost her family in the process – but has no regrets.

Seoyeon Lee had one chance to escape and she took it, running down the road in Fiji in her pyjamas and flip-flops.

“I was crying and I looked hysterical,” she told the BBC.

The then 21-year-old was being pursued by members of Grace Road – including her own mother – who she says had tricked her into going to the Pacific island nation.

“I would have killed myself if they’d made me stay,” she says.

A year earlier, in 2013, Seoyeon had come home to South Korea from the US, where she was studying, for the summer. Her mum was suffering from uterine cancer but had refused treatment.

She told Seoyeon she would only seek treatment if she went with her to Grace Road Church.

“It was very bizarre,” said Seoyeon. “There were people screaming, crying, speaking in tongues and the sermon was about how the end times were coming.

Once back at university, she found her mother had still not sought treatment and would only do so on one condition – that Seoyeon quit school and went back to South Korea.

Seoyeon, whose father had died of cancer, took leave and went home.

After her mother went through surgery, she told Seoyeon that she wanted to move to Fiji to recover – and insisted that she go along with her. Eventually, Seoyeon agreed to go for two weeks to help her adjust.

“At that point, I didn’t know it was an elaborate ruse,” she said.

“But when I got to Fiji and saw we were driving to a commune… I was like, how could I have been so stupid?”

South Korea has a significant Christian population, and in recent decades many small, fringe churches have sprung up, some of them developing cult-like characteristics.

Grace Road, which insists it is not a cult, started out small in 2002, but now numbers about 1,000 followers, according to Prof Tark Ji-il of Busan Presbyterian University, who has closely studied Korean cults.

The church’s founder and head pastor, Shin Ok-ju, believes that a great famine is imminent, and that her followers “needed to find a new home to prepare for the second coming of Jesus”, says Prof Tark.

In 2014 – the same year it was classified as heretical by mainstream churches – the church uprooted to Fiji, declaring that it would be one of the few places saved by God from famine.

About 400 of its followers now live in Fiji, mostly working for the company it has set up to manage its operations, GR Group.

Seoyeon says those there have been “handpicked” by the leadership “maybe depending on how much you’ve donated”.

“When my dad died, we were left a certain sum of money. I’m pretty sure my mum took all that and gave it to the church,” she said. “They make you sell your property, quit your job, cut off your friends.”

The group has built up a sizeable business empire, from construction to restaurants to agriculture.

“Farming is our original mission because we need to prepare for the famine, we need to be self-sufficient,” Daniel Kim, president of GR Group and Ms Shin’s son told the BBC.

The group’s construction business has also won lucrative contracts, including a tender to renovate the Fijian president’s residence and its State House, which Mr Kim insists was won through a legal tender process.

In an indication of his good connections, Mr Kim was pictured with Fijian Prime Minister Frank Bainimarama, after the group won the Prime Minister’s International Business Award.

‘No choice but to stay’

But over the past year, a bleak picture has emerged of life inside Grace Road.

Five church members who had returned to South Korea accused Ms Shin of confiscating their passports and holding them against their will. They alleged the church used forced labour and issued ritual beatings so harsh that they led to the death of one follower.

In July, Ms Shin was arrested while back in South Korea on charges of assault and confinement. She was alleged to have abandoned the church members, confiscated their passports, and overseen a brutal regime.

Then in August, Fijian and South Korean authorities conducted a joint raid on the church in Fiji, arresting Mr Kim and several other senior members as part of a slavery investigation.

They were released without charge, but according to Fiji’s police commissioner, investigations are “ongoing”.

Chief Chun Jae-hong of the Korean National Police Agency told SBS that many had “donated their entire fortune to the church, so even if they go back they are penniless… so they have no choice [but to stay]”.

South Korean police directed the BBC to the documentary when asked for comment.

Wilfred Regunamada, a spokesman for the Fiji Methodist Church, recently told New Zealand media that Grace Road members were living in fear, and called on the Fijian government to do more to explain its links with the church.

The government did not respond to requests for interviews with the BBC.

Mr Kim firmly denies wrongdoing and said of his mother: “I don’t understand why they are treating her like a criminal.

“It’s a very malicious attack [by those] who have run away. They say that me and other senior members are like a ruling cult. It’s insane.”

He insisted “no ritual beatings” had taken place. “If someone did something very wrong, they might get slapped by our pastor… [but] in a way that a mother would rebuke her child,” he said. The cause of the follower’s death was cancer and “there’s no evidence to connect it to beatings”, he said.

Mr Kim says all those in Fiji had volunteered to go, and “it doesn’t matter if they bring money or not”.

He evaded a question as to whether church members were paid for their work, saying they “have accommodation, food and travel all covered by the company”, adding that he himself does “not receive a fixed salary every month”.

And what of the allegations that the 400 church members are essentially being held against their will?

“Impossible,” he said. “If we really captured their passports it’s very simple, they can just go to the embassy and get an emergency passport.”

That’s exactly what Seoyeon had to do.

‘I would have killed myself’

The day before she was due to leave, she realised that her laptop and passport were missing. Her mother admitted she had taken them to stop her leaving.

“I wanted to go back to college, I wanted to meet my friends,” she said.

She tried ringing the police, but alleges that the other followers “rang them back, saying it was a joke”.

“They tried to block me but I ran out to the road. I was going insane.”

She found a police car which took her to the station, and eventually managed to get an emergency passport.

“They followed me all the way from the station to the embassy in a car. That was when my mum tried to break me. She told me I was adopted – that was how I found out.

“She said my entire family – my aunts, uncles, grandmother and cousins – were all moving here and our apartment had been sold. She was trying to convince me that I had nobody,” said Seoyeon.

“But I would never have gotten brainwashed and joined the church. I would have killed myself if they had made me stay.”

Now back in South Korea, she says she can’t afford to return to studying, but has moved on and has a steady job.

“I am very happy with where I am in life now. I still love my family but as cold as this might sound, I can’t really forgive them for what they’ve done… and after everything that’s happened I can never invite them back into my life,” she said.

“They are so deep in the cult that there’s no way I could change their minds… if they’re already in Fiji, they’re a lost cause.”