The day began in jittery anticipation as 172 Lycra-clad runners jumped up and down at the starting line of the 62-mile mountain race in Gansu Province, China. Zhang Xiaotao noticed the wind as it blew the hats off some of his competitors. It was an early sign of the challenge ahead.

A few hours later, Mr. Zhang, 30, would be lying unconscious on the rugged mountain, according to a written account that he shared on Chinese social media.

Mr. Zhang, a sports blogger, was among the group of survivors who were rescued when whipping rain turned to hail and temperatures plummeted hours into the ultramarathon on Saturday. More than 1,200 rescuers were later dispatched to find bodies in the storm. Twenty-one runners died, many of them after suffering from hypothermia.

According to his account, Mr. Zhang began to climb the toughest part of the race when icy rain and hail fell harder and obscured his view. “It kept hitting my face and my eyes began to blur, and I couldn’t see the road clearly,” he wrote.

The wind grew so strong that he slipped and fell nearly a dozen times until he could no longer pick himself up and eventually passed out. He woke up in a cave, wrapped in a quilt next to a fire built by a shepherd who had found him and carried him to safety.

Local government officials who organized the ultramarathon at the Yellow River Stone Forest Park said that the tragedy had been caused by a sudden and unpredictable change in the weather that occurred a few hours into the race when runners were climbing 6,500 feet above sea level to the 12-mile mark. 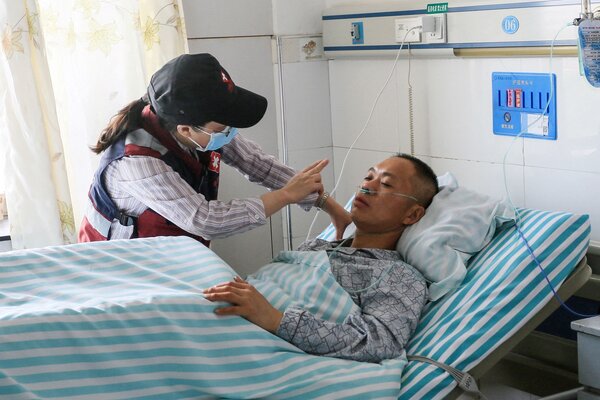 Stories of runners stranded with no cellphone reception and ill equipped for hail and strong winds have gripped the Chinese headlines since Saturday. Images of runners huddling under foil blankets twisting in the wind have prompted outrage on social media.

By Sunday evening, the higher provincial government in Gansu, a northwestern province, had set up a team to investigate the deaths. Some state news media have raised questions about the decision not to cancel the race and what could have been done to prevent the loss of life. Zhang Xuchen, the mayor of the nearby city of Baiyin who had fired the starting pistol, apologized on national television and bowed as he expressed his sorrow for those who had died.

Mr. Zhang could easily have been one of them.

Shortly before he began to stumble up the mountain, Mr. Zhang overtook Huang Guanjun, the champion of the men’s marathon for hearing-impaired runners at the 2019 Chinese National Paralympic Games. As Mr. Zhang was passing, Mr. Huang pointed to his ear and waved to indicate he could not hear Mr. Zhang.

“Later I found out that he was deaf and mute,” Mr. Zhang wrote. Mr. Huang died on the same mountain pass not long after the encounter.

At the front of the race, Mr. Zhang joined five other runners, including Wu Panrong, who had accompanied him from the starting line. Mr. Zhang later learned that he was the only one to survive among the pack. Mr. Wu also died.

The race at Yellow River Stone Forest Park was popular with extreme athletes for whom running the length of more than two marathons can be a monthly event. It had been organized by the local government for the past four years and was seen as a way to promote tourism in the area, one of China’s poorest provinces. This year, 172 people participated.

Competitors are usually mountaineers, ultramarathon runners and trail runners, many of whom are motivated by the prize money as well as the glory.

Yun Yanqiao, a respected Chinese trail runner, did not compete in the race on Saturday but lost two friends, Huang Yinbin, 28, and Liang Jing, 31, an ultramarathon champion. For Mr. Huang and Mr. Liang, running ultramarathons was as much about the sport as it was about the monetary award, Mr. Yun said. Neither Mr. Liang nor Mr. Huang came from wealthy backgrounds.

The award for the Yellow River Stone Forest Park race was around $2,300, according to the event’s social media account.

Mr. Yun said he believed that Mr. Liang ran the race for his wife and young child as well as for his passion. “He was someone who always worked really hard at training and at racing. He was someone who cared for his family a lot.”

Another survivor, the well-known Chinese mountaineer Luo Jing, described her experience to the state broadcaster CCTV. As she and other runners began the steep ascent and the air thinned with the high altitude, she said, she noticed more and more runners stopping on the side of the road, trembling from the cold.

“They said it was too cold on the mountain, and they all wore shirts and shorts,” Ms. Luo told CCTV. “Someone told us: Go down the mountain, some people are already foaming at the mouth.”

Ms. Luo posted a short video on her way down the mountain on Weibo, the Chinese social media platform.

“I’m going back now, I’m safe,” Ms. Luo says in the video as the wind batters her phone and the waves of freezing rain obscure the background.

Many of the videos broadcast on national television showed the athletes in shorts and thin Lycra running across rocky, dusty, narrow paths between pillars of stone. Some media coverage of the event has suggested that the runners should have been better prepared.

Mr. Yun said that the tragedy was as much a natural disaster as a human-caused one and that blaming the victims was not fair.

“Someone criticized the runners, who are the victims, for having not prepared enough,” he said. “But it should be the responsibility of the organizers to inform the runners of the risks and tell them how best to prepare.”

Coronavirus: Parents no longer allowed to drop off children daily at grandparents' place