Home » Asia » ‘I Will Die Protecting My Country’: In Myanmar, a New Resistance Rises

In a jungle in the borderlands of Myanmar, the troops sweated through basic training. They learned how to load a rifle, pull the pin of a hand grenade and assemble a firebomb.

These cadets are not members of Myanmar’s military, which seized power last month and quickly imposed a battlefield brutality on the country’s populace. Instead, they are an eclectic corps of students, activists and ordinary office workers who believe that fighting back is the only way to defeat one of the world’s most ruthless armed forces.

“I see the military as wild animals who can’t think and are brutal with their weapons,” said a woman from Yangon, Myanmar’s biggest city, who was now in the forest for a week of boot camp. Like others who have joined the armed struggle, she did not want her name published for fear that the Tatmadaw, as the Myanmar military is known, would target her.

“We have to attack them back,” she said. “This sounds aggressive, but I believe we have to defend ourselves.”

After weeks of peaceful protests, the frontline of Myanmar’s resistance to the Feb. 1 coup is mobilizing into a kind of guerrilla force. In the cities, protesters have built barricades to protect neighborhoods from military incursions and learned how to make smoke bombs on the internet. In the forests, they are training in basic warfare techniques and plotting to sabotage military-linked facilities. 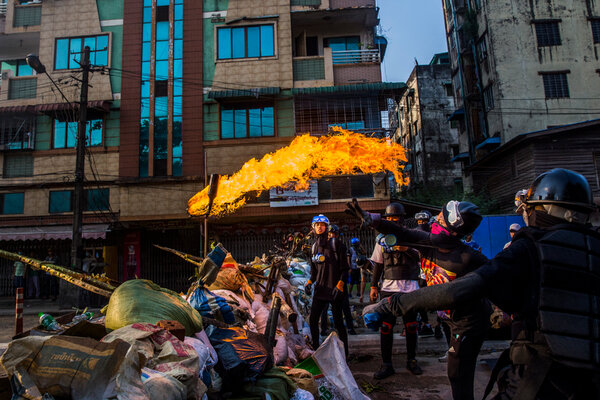 The boldness and desperation of this new front recalls the radicalization of a previous generation of democracy activists in Myanmar, who traded treatises on political philosophy for guns. As in the past, the hard-line opposition is a defensive response to the military’s mounting reign of terror. The Tatmadaw has cracked down on peaceful protesters and unarmed bystanders alike, killing at least 275 people since the coup, according to a monitoring group.

Other forms of resistance have continued in Myanmar. A mass civil disobedience campaign has idled the economy, with a nationwide strike on Wednesday leaving towns devoid of business activity. In creative acts of defiance, protesters have lined up rows of stuffed animals and origami cranes as stand-ins for demonstrators who could get shot.

But there is a growing recognition that such efforts may not be enough, that the Tatmadaw needs to be countered on its own terms. Last week, remnants of the ousted Parliament, who consider themselves the legitimate government, said that a “revolution” was needed to save the country. They have called for the formation of a federal army that respects various ethnic groups, not just the majority Bamar.

“If diplomacy fails, if the killings continue, the people of Myanmar will be forced to defend themselves,” said Dr. Sasa, a spokesman for the ousted Parliament who is on the run after having been charged with high treason.

Any such movement will have to contend with a military that has ruled Myanmar by force for the better part of 60 years and has fought dozens of insurgencies for even longer. The Tatmadaw’s bloodthirst is notorious. Senior Gen. Min Aung Hlaing, the army chief who led the coup, has repeatedly commanded the extermination of entire villages, most chillingly the ethnic cleansing of Rohingya Muslims.

The country has trembled as the Tatmadaw has brought its war machine to the cities, imprisoning Myanmar’s civilian leaders last month and erasing a decade of political and economic reform.

Since then, dozens of young protesters have been killed by single gunshots to the head. Security forces have fired into homes at random, leaving families cowering in back rooms. On Tuesday, a 7-year-old girl sitting at home in her father’s lap was shot in the city of Mandalay, in what appeared to be a collateral death. (Hundreds of protesters were released on Wednesday after weeks of detention.)

The Tatmadaw is flouting the international rules of war. Security forces have fired at ambulances and tortured detainees. Given the brutality, members of Myanmar’s frontline of democracy say there is no choice but to take up arms.

Most days in the concrete conflict zones of Yangon, Ko Soe Win Naing, a 26-year-old sailor, prepares for war: a GoPro camera affixed to his helmet, a balaclava over his head, vials of tear gas in his vest pockets, a sheathed sword on his back and a gas mask at the ready. His weapon of choice is a firework fashioned into a sort of grenade.

Mr. Soe Win Naing has not gone home for weeks, part of a roving gang that tries to protect neighborhoods from marauding security forces. He does not, however, support going into the jungle to train to fight the military.

“Although we are working for the right thing, I have become like a fugitive,” he said. “But even if I get killed, I will fight until the very end.”

The frontline fighters have piled up sandbags and built bamboo barricades, which they defend with homemade firebombs. Children have joined, too, dressing in pajamas to look harmless as they travel to their battle posts.

“I don’t have fear,” said Ko Moe Min Latt, 15, a member of a defensive line who barely reaches 5 feet tall.

The image of resistance in Myanmar, once known as Burma, is often wreathed in an aura of nonviolence. In 1988, students argued political theory in the classroom and marched for democracy on the street. In 2007, Buddhist monks overturned their begging bowls and walked barefoot in quiet dissent.

The nation’s ousted civilian leader, Daw Aung San Suu Kyi, was awarded a Nobel Peace Prize for her campaign against the generals who locked her up for 15 years. (The award was tarnished by her defense of the ethnic cleansing of the Rohingya.)

But most struggles in Myanmar have involved guns and slingshots. In the mountainous periphery of the country, ethnic armed groups have been fighting for autonomy for decades. After soldiers gunned down hundreds of protesters in 1988, thousands of students and activists fled into the forests and formed armed groups that fought alongside ethnic insurgencies.

Of late, their tactics have extended to information warfare. On Wednesday, anti-coup protesters said they had launched hacking attacks on two military-linked banks.

For the new generation, the decision to fight is born of a desire to protect what the country has gained over the past decade. Myanmar was once one of the most isolated countries on Earth, as a xenophobic and economically inept junta cleaved the country from the international community. Then came tentative political reforms, an internet link to the world and chances at private-sector jobs.

The notion that Myanmar might return to a frightened past has galvanized some protesters. One young woman, who is about to start military training in the jungle, said she remembered huddling as a child with her family and listening secretly to BBC radio broadcasts, an act that once could have earned imprisonment.

“I decided to risk my life and fight back any possible way I can,” she said. “If we oppose nationwide in unison, we will make the military have sleepless nights and insecure lives, just as they have done to us.”

The security forces, she continued, are following orders and lack a greater purpose.

“We have our political faith, we have our dreams,” she said. “This is the fight in which we have to use our brains and our bodies.”

If any armed rebellion is to succeed, it will need the backing of the ethnic insurgencies that have long been at war with the Tatmadaw. Last week, the Kachin Independence Army, which represents the Kachin of northern Myanmar, launched a surprise strike against the Tatmadaw.

On Thursday, five Tatmadaw soldiers were killed by the Karen National Liberation Army, which fights for the Karen ethnicity. Last year, hundreds of Tatmadaw troops died while battling another ethnic insurgency in western Rakhine State.

“If ethnic armed groups launch offensives, it could help relieve pressure on the protesters in the cities,” said Padoh Saw Hser Bwe, a general secretary of the Karen National Union.

With the Tatmadaw’s most notorious brigades now stationed in the cities, focused on anti-coup protesters rather than ethnic civil war, the military’s killing continues unabated.

On Monday in Mandalay, Ko Tun Tun Aung, 14, wandered out of his home to grab a pot of water. A bullet pierced his chest, killing him instantly, according to his relatives. At least seven others were also shot dead in the same neighborhood that day. Two were rescue workers.

Ko Thet Aung, a 23-year-old frontline defender, is from the same Mandalay neighborhood where the killings occurred. For three weeks, he has been manning barricades and dodging gunfire.

“The more they crack down, the more we are motivated to fight back,” he said. “We are from Generation Z, but I would call ourselves Gen-P — Generation Protection. I will die protecting my country at the front lines.”

Audio recording to be allowed in taxis and private-hire cars