Ou Hongyi stopped going to school after watching Al Gore in “An Inconvenient Truth,” the documentary on the looming climate catastrophe, on her 16th birthday.

In the two years since, she has waged a lonely, often frustrating campaign to raise awareness of the perils of a warming planet. She has joined international “climate strikes,” planted trees in her hometown in southern China, Guilin, and mounted a flurry of one-woman protests.

She has been called the Greta Thunberg of China, a nod to the Swedish activist who is only a few weeks younger. Ms. Thunberg, though, has been feted for her activism. She speaks at Davos and the United Nations. Time magazine named her its person of the year in 2019.

In China, where any kind of activism amounts to a challenge to the ruling Communist Party, Ms. Ou has been ignored, ridiculed and ostracized, as well as harassed by school officials and the police.

When she joined the Global Climate Strike on Sept. 25 in Shanghai, an international event that attracted thousands of protesters at more than 3,500 locations, she was detained and questioned for several hours by the police. The officers scolded her. “They thought what we were doing was meaningless,” she said.

China has had a poor environmental record, prioritizing its breakneck economic transformation over the past four decades. Now, there are signs it has begun to consider the consequences of unchecked development like choking pollution, contaminated waterways and unusually heavy flooding that was attributed to climate change. The country’s leader, Xi Jinping, recently committed to making the sort of bold steps activists like Ms. Ou have been calling for. He pledged that China’s emissions would peak by 2030 and that the country would reach “carbon neutrality” — the point where emissions are balanced with carbon offsets or removal — by 2060. 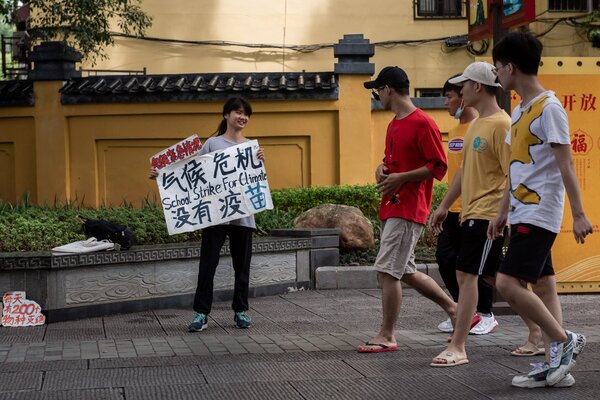 Mr. Xi’s promises have been welcomed by many but also greeted with wary skepticism, since meeting those goals will require significant changes to economic policy. Ms. Ou, who does not consider herself a critic of the government, demurred when asked about the goals.

“It is for scientists to assess how strong it is,” she said.

She then cited a recent report by three prominent climate researchers warning that China needed to meet those targets much sooner — peak emissions by 2025 and carbon neutrality by 2050 — if the world hoped to avoid catastrophic damage from global warming.

“Everyone should realize that the climate crisis is already the biggest existential crisis facing mankind,” she said. People needed to read about the crisis, to understand it and talk to their friends and family about it. “When they really read and understand it, they will know what they should do.”

Ms. Ou, who turns 18 on Dec. 11, was born in Guilin and grew up on a college campus in a city renowned for its natural beauty. In one of several telephone interviews, she described hikes in the parks and mountains that surround the city. Nature was, she felt, “injected into my blood and bone.”

She liked school. She played soccer, though few other girls did. As a hobby, she drew and painted watercolors and later comics. Now, she feels hobbies are indulgences.

“In the face of such a big problem, at this moment, at every moment, when life is being maimed and tortured, what excuses do we have to entertain for our own desires?” she said.

Her ecological awakening, she said, began with a dream she had in January 2018. In it, she went to a restaurant where customers were presented with a bucket of fish and a knife. Each patron had to catch and kill a fish, or not eat. When she was about to kill hers, “the fish turned to look at me,” she said.

“I still remember the extremely fearful look in its eyes,” she said. “I haven’t eaten any meat since then.”

Soon after, she read an article in a National Geographic magazine borrowed from the library. It detailed the devastating effects that the excessive use of plastics was having on marine life. Her first direct action was a failed effort to persuade her school cafeteria’s director to stop using plastic utensils.

“He thought that plastic disposable tableware was very hygienic,” she said, adding, “I think his reason was that the cost would increase.”

At first, watching Mr. Gore in “An Inconvenient Truth” convinced her that she should attend Harvard, as he did. She decided instead to postpone the idea of college altogether and has devoted herself to independently studying the science of climate change.

When she heard of Ms. Thunberg’s Fridays for Future movement in 2019, she was chagrined to learn there were none of the same sort of protests in China to draw attention to the issue of climate change. In May of that year, she held China’s first, standing alone with a picket in front of the Guilin municipal government building for six days.

On the sixth, the police took her in for questioning, calling in her parents and asking them to make her stop. “Not everyone’s feedback is positive,” she said.

Still, the map of strikes around the world on Fridays for Future’s website now has a dot for Guilin. And a handful of new ones have spread to cities like Nanjing and Shanghai, perhaps inspired by her example.

Ms. Ou brushes off comparisons to her more famous climate counterpart. “I feel that Greta’s knowledge of the climate crisis and her deep understanding and care for the world is something that I do not have yet,” she said.

Ms. Ou says her activism has strained her relationship with her parents, who still hope to see her attend college. Yet, they became vegetarians, too, and still provide material and moral support. She spent much of the last two years trying — unsuccessfully — to build alliances with other activists in China.

China has environmental organizations, though they, like all nongovernmental groups, are under strict scrutiny from the authorities and generally shy away from direct protest or criticism. When she tried to volunteer at the annual summit of the China Youth Climate Action Network in Shenzhen last year, the organizers turned her away.

Hu Jingwei, an officer with the network, expressed admiration for Ms. Ou’s devotion, calling her “quite active and quite courageous.” She also said she was not sure that Ms. Ou “meets the qualification standards” to join the organization, but declined to explain why.

Ms. Ou’s latest protest happened spontaneously, during a trip with her parents to Guangzhou, a booming southern city near Hong Kong. Her parents had booked her a hotel room, which she felt was wasteful.

Angry with her parents, she decided to hold an overnight vigil outside the hotel. “All of us know that in the hotel industry, the bedding for guests and other disposable items the hotel provides waste a lot of water resources and emit a lot of carbon dioxide,” she said.

She huddled inside her hooded sweatshirt through the cold night, surrounded by hastily made fliers with messages like “Vigil for Climate.”

She has also posted messages on social media, including Twitter, where she uses her English name, Howey. “Wake people’s conscience through noncooperation with hotel industry capitalism,” she wrote in red ink in one of the several manifestoes “Challenge the system in an open, pleasant and fair way.”

Hotel workers invited her inside to warm up. Delivery drivers brought takeout food. “I also told them why I do this,” she explained. By morning, office workers were passing by, though few paid any attention to her signs. She ended her vigil just before 9 a.m., after more than 10 hours, undaunted.

“It’s like a lonesome spiritual exercise every single time,” she said.