Home » Asia » In a Crisis, India’s Modi Could Always Change the Narrative. Then Came Covid.

NEW DELHI — As India gasped for air at the peak of its Covid devastation, its leader appeared to advise his people to just breathe normally.

The instructions, a bit of yoga advice for the stressed, came from one of the many social media accounts of Prime Minister Narendra Modi, who has used powerful oratory and digital savvy to become India’s most dominant leader in decades. But the tweet showed how India’s master of public perception has increasingly struggled to get his message across, exposing the limits of his ability to control the narrative.

The omnipresent Mr. Modi had largely vanished from public view as his government proved powerless to stop the deaths and the mounting criticism about his performance. With his poll numbers dropping and his allies straining to make his case on India’s talk shows, he and his minders have increasingly pushed “be positive” messaging and feel-good tips.

The campaign has struggled to connect. “Sit in a comfortable meditative posture,” read a tweet from one of Mr. Modi’s many accounts, which project his diverse set of personas — this one the wise yoga guru. “Keep the spine erect. Place the hands on the thighs. Gently close the eyes and raise the face slightly. Breathe normally.”

Responded one commenter: “This is like rubbing salt on wounds.” 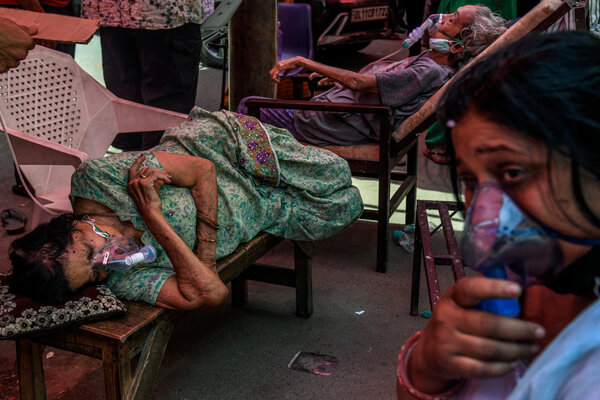 In turn, Mr. Modi has tried to quash dissent. His government has been locked in a messy showdown with social media platforms over taking down critical content. The police in Delhi, the capital, arrested at least 20 people for putting up posters critical of Mr. Modi’s handling of vaccinations. A Modi protégé, who leads India’s most populous state, Uttar Pradesh, threatened those who complained about oxygen shortages.

On Monday, as India’s official death and infection figures were falling, Mr. Modi tried to seize the moment and change the narrative. In a rare televised address since the second wave began in April, he declared that the central government would help all 900 million adults get free vaccines, a reversal of his earlier policy that had forced state governments into a chaotic competition over limited supplies. A spokesman said Mr. Modi had been too busy with “silent work and work and work” to appear in public during the pandemic.

Mr. Modi’s positivity push appears to be an attempt to drown out dissatisfaction. One survey found disapproval with Mr. Modi rising by about 10 percentage points since the second wave intensified. In another survey, one in six people said they had lost a loved one and blamed the central government first, and then “destiny,” for their loss.

“So much death, so much despair — children lost their parents overnight, elderly parents lost their young children, people lost their spouses,” said Shruti Chaturvedi, an entrepreneur doing relief work in the state of Goa. “How can we dare tell them ‘be positive’?”

Mr. Modi’s approval rating is still above 60 percent, according to one poll. But the growing dissatisfaction suggests the prime minister may not so easily be able to change public sentiment by pushing emotional nationalist causes or shifting his image as he has done in the past. Rather, like any other politician, he may increasingly be judged by his ability to deliver.

“There was a template — that if you invisibilize problems you do not want to focus on and convince the rest of the population that only the visible part is the entire part, that seemed to work in the past,” said Kota Neelima, the founder of the Institute of Perception Studies in New Delhi. But in a once-in-a-century catastrophe, she said, “you actually notice the government is absent.”

Perhaps the most telling criticism has come from the Rashtriya Swayamsevak Sangh, a powerful organization with millions of members that has long supported turning India into a Hindu state and that has placed its hopes in Mr. Modi.

The R.S.S. recently tried to help the positivity campaign by holding a series of lectures by influential figures called “Positivity Unlimited.” But in his own speech, Mohan Bhagwat, the R.S.S. chief, couldn’t entirely deflect blame from Mr. Modi’s administration: Both the government and the people had lowered their guard, he said.

Mr. Modi picked up many of his skills as a communicator as an R.S.S. volunteer, said Badri Narayan, a social historian and political analyst who has written extensively about the group. Its “language of mobilization” emphasizes storytelling loaded with symbolism echoing thousands of years of history.

“He was trained in that pedagogy of oratory,” Mr. Narayan said. “He came to learn how to use storytelling for bigger messaging, and he evolved that training in his own ways.”

How Mr. Modi will emerge from the pandemic could depend on those talents, which have bailed him out in the past.

To become prime minister, Mr. Modi overcame a reputation tarnished by his alleged involvement in fanning religious violence when he was chief minister of the state of Gujarat two decades ago. For a time, he was banned from entering the United States on grounds that he had violated religious freedoms. He successfully rebranded himself as the Hindu nationalist who could be India’s development champion. Soon after winning election in 2014, he traveled to the New York and spoke for an hour in a packed Madison Square Garden to chants of “Modi! Modi! Modi!”

In seven years as prime minister, he has tightly controlled his image. He prefers choreographed rallies and selective interviews over news conferences, avoiding vulnerability while offering plenty of content for his social media apparatus and network of celebrity supporters.

In the face of crisis, Mr. Modi has displayed a talent of inventing a new narrative and switching personas, including combative national champion, digital leader and spiritual guide. At times he could seem deeply relatable, at others above it all. And he had what the opposition lacked: an ability to take his message viral.

During the 2019 election, with the economy weakening, he emphasized the threat from Pakistan. Referring to an earlier comment Mr. Modi had made, his party projected him as the nation’s toughest “watchman,” boasting about the size of Mr. Modi’s chest as a sign of his strength.

Just before the voting, he visited a temple and went to meditate in a cave, emphasizing his religious devotion. The path was covered by a red carpet and surrounded by cameras. There were even photos and footage of the meditating Mr. Modi inside the small cave.

After last year’s first wave of the virus, Mr. Modi declared victory, saying India “with a proactive approach” had saved “the entire humanity from a big tragedy.” He transitioned to an image of a wise man at the service of the nation. He grew his beard. His office posted a video of Mr. Modi feeding baby peacocks, strolling with full-plumage adult birds and perusing documents with one at his feet.

When the second wave struck, Mr. Modi was on the campaign trail, boasting about crowd sizes and ripping into opponents. Experts now say those rallies undermined social distancing warnings.

Mr. Modi and his allies have tried to drown out the negative voices as they scramble to address a catastrophic oxygen shortage and mismanaged vaccine supplies. The main tactic appears to be the threat of bogging down critics in India’s labyrinthine judicial system.

In Delhi, the central government’s police arrested more than 20 people last month for putting up posters critical of Mr. Modi’s handling of the vaccination drive. The posters were made by the party that governs Delhi, which has clashed with Mr. Modi’s party. But the arrests for a simple act of protest in the nation’s capital sent shock waves.

Mr. Modi may now be judged less by his rhetoric and ideology and more by his ability to provide services, said Mr. Narayan, the historian.

“The debate is going to shift toward politics of medicalization, to the safety of the body,” Mr. Narayan said. “He is talking as a prime minister, so he has to talk about delivery.”