More than 148 people, most of them children, were killed making it the second deadliest attack in Pakistan. 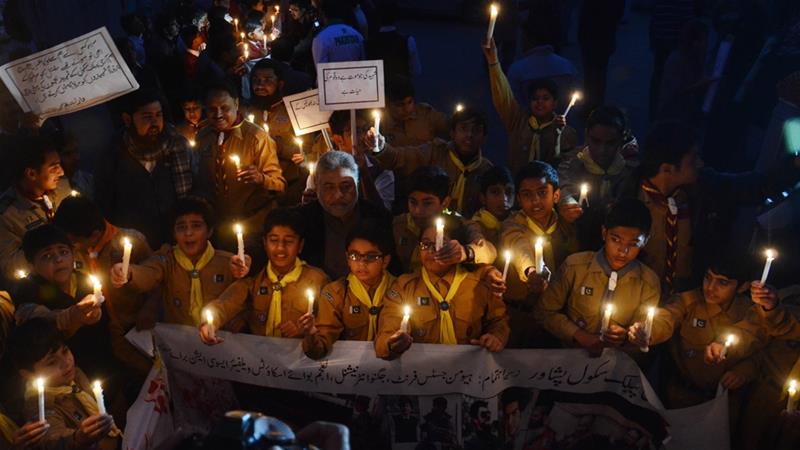 Islamabad, Pakistan – Ajoon Khan remembers that brisk December morning in the northwestern Pakistani city of Peshawar vividly, as if it were yesterday. On most days, he would still be asleep when his son, Asfand, left for school, but he happened to have woken up early that day.

“We sat wrapped in blankets in bed,” he says, recalling how he spoke to Asfand, 15, his eldest child, about an upcoming wedding in the family, for which they would have to travel to the eastern city of Lahore.

“He said to me, ‘Papa, I want to get some new boots for the wedding.’ We decided we would both go to the bazaar that day, after he got home from school.”

Hours later, while at court for a legal hearing, Khan got word from a relative that there had been explosions heard in the city. Soon, the target of the attack was confirmed; gunmen had stormed the Army Public School, where Asfand studied.

“It was very strange, almost surreal,” says Khan. “All the roads were closed, so I walked from the courts. I seemed to walk for endless miles.”

At the school, the security operation to secure the facility was over, and ambulances were busy shuttling the dead and wounded to the city’s hospitals.

Hours passed, as Khan walked first to the Combined Military Hospital, and then to the Lady Reading Hospital, searching for his son among the bloodied bodies of the 134 schoolchildren killed and dozens more who were wounded when the six gunmen stormed their school, setting off explosives and firing automatic rifles into classrooms and auditoriums.

Finally, he received another message, from the same relative who had alerted him to the attack.

“They had found Asfand’s body. I had to go home.”

More than 148 people, most of them children, were killed in the attack on Peshawar’s Army Public School on December 16, 2014, making it the second deadliest attack in the country’s history.

The Tehreek-e-Taliban Pakistan, an umbrella group of armed groups that had been fighting the Pakistani state since 2007, soon claimed responsibility for the assault. In a statement, the Pakistan Taliban claimed the children were legitimate targets because they were studying at a military-run school.

Since 2007, the Pakistan Taliban had carried out a bloody campaign of suicide attacks, bombings and shootings that targeted civilians, security forces and government personnel across the country, in a bid to overthrow the Pakistani government and enforce a strict interpretation of Islamic law.

The attack on the school in Peshawar came after another one earlier that year on a major airport in the southern city of Karachi, Pakistan’s largest city and its economic backbone, prompted the launch of a military operation, Zarb-e-Azb [The attack of the Prophet’s Sword], against the group.

Following the attack on the Army Public School, the government ramped up its security operations, with the military stepping up air attacks and ground operations in all seven northwestern tribal districts, targeting the Pakistan Taliban.

In all, the military says it killed more than 4,000 members of armed groups since it launched Zarb-e-Azb, losing hundreds of soldiers in the process. The data is impossible to verify, given strict reporting restrictions in the conflict zone.

So where does the Pakistan Taliban stand now? 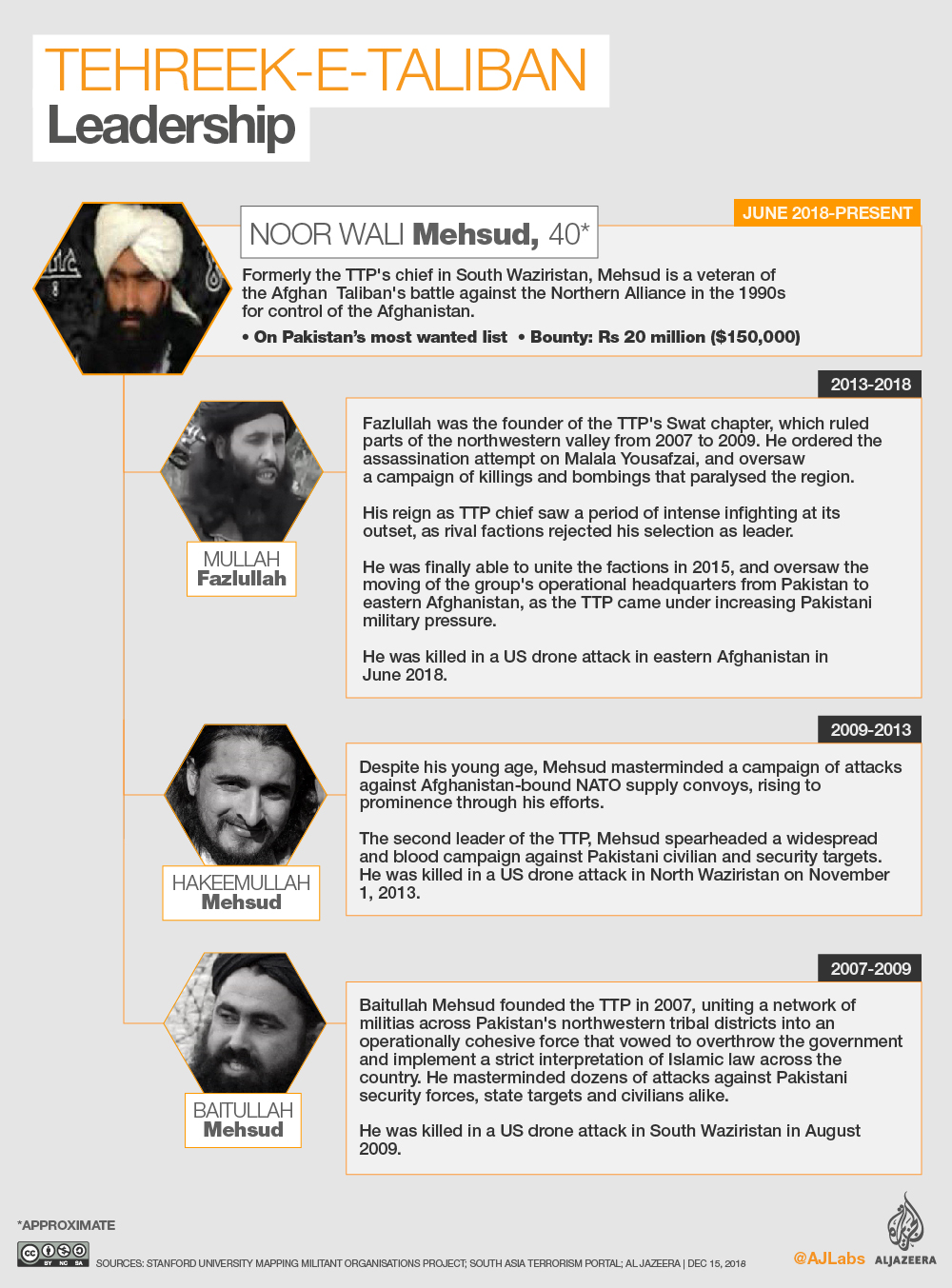 “The operational capacity of the TTP [Tehreek-e-Taliban] is, today, a lot more limited than what it was before the military operation was launched,” says Simbal Khan, an Islamabad-based security analyst.

“Zarb-e-Azb has succeeded in eradicating bases within Pakistani territory, where they had networks, support and logistics.”

The Pakistani military says it has now reclaimed the tribal districts from the Pakistan Taliban’s grip, reestablishing the writ of the state and pushing the Tehreek-e-Taliban‘s fighters across the border into eastern Afghanistan, where they are suspected to be based out of Nangarhar and Kunar provinces.

Hakeemullah Mehsud’s successor as Pakistan Taliban chief, Mullah Fazlullah, was killed in a United States’ drone attack in Afghanistan’s Kunar province in June. The group has since installed Noor Wali Mehsud as its new leader.

“Pakistan has repeatedly shared both information and intelligence with Afghanistan as well as [NATO] authorities regarding [the Tehreek-e-Taliban‘s] presence/safe havens inside Afghanistan,” the military said in a statement emailed to Al Jazeera. “They are living there due to small presence of force on ground owing to lack [of] capacity.”

The shift across the border, analyst Khan says, has limited the group’s ability to attack government and civilian targets as frequently as it used to, forcing it to change its tactics.

The data bears out the contention, with casualties from Tehreek-e-Taliban-linked attacks in Pakistan down from 372 in 2014 to 186 in 2018, according to data from the New Delhi-based South Asia Terrorism Portal (SATP).

The alleged shift across the border has seen the pattern of violence change, too. Since 2014, while the frequency of attacks has dropped significantly, it appears the Pakistan Taliban and its allied armed groups have refocused on launching sporadic large casualty attacks against civilian targets.

In November 2014, weeks before the Peshawar school attack, a Tehreek-e-Taliban suicide bomber killed at least 60 people at the Wagah border crossing between India and Pakistan.

In January 2015, at least 60 people were killed in a suicide bombing targeting members of the minority Shia Muslim sect in the southern city of Shikarpur.

In March 2016, at least 75 people were killed by a suicide bombing targeting Christians gathered at a Lahore park. Later that year, the Pakistan Taliban claimed responsibility for a bombing that killed more than 70 people at a hospital in the southwestern city of Quetta.

In 2018, the Pakistan Taliban claimed responsibility for a series of attacks ahead of the country’s general election, including one in the southwestern town of Mastung that killed at least 145 people.

“The number of attacks rising [this year] is a sign that the Tehreek-e-Taliban is rehabilitating its networks in the country, in some way,” says analyst Khan. “There is some kind of a local support network that is [needed for these attacks].” 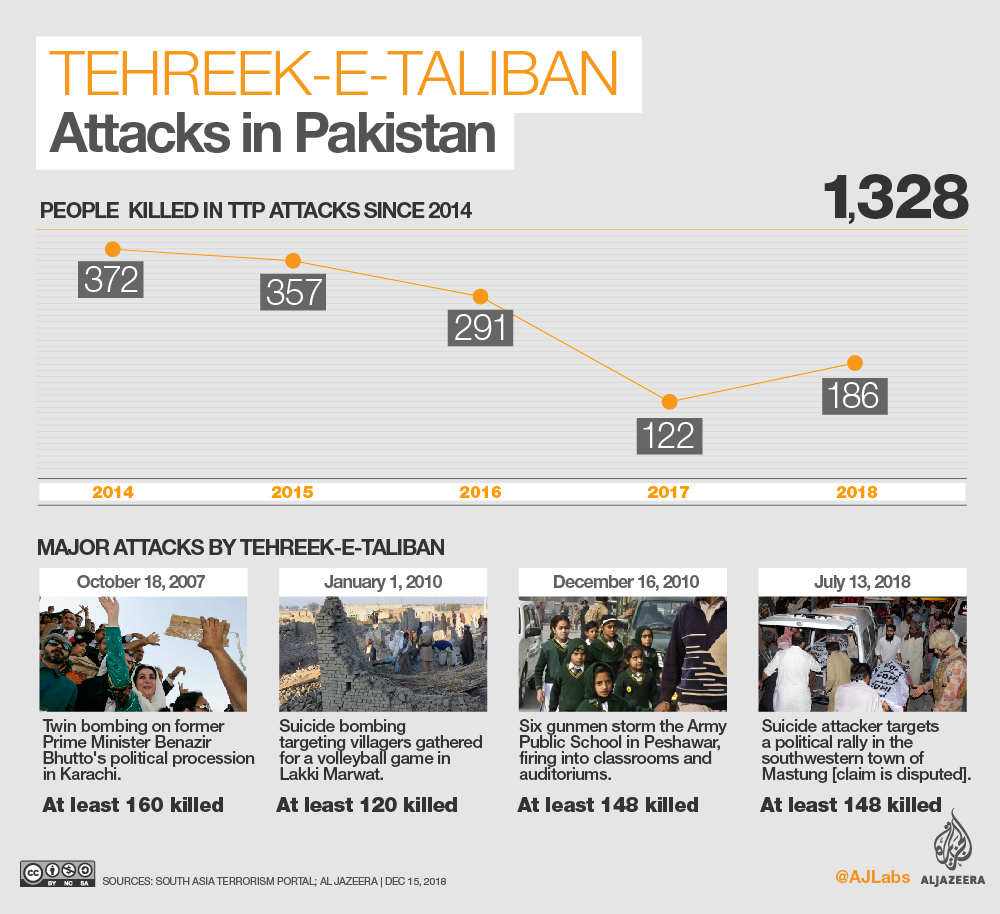 From Taliban to ISIL

In the vacuum created by the Tehreek-e-Taliban’s displacement from Pakistan, a new force emerged in 2016, claiming a series of major attacks, mainly in the southwestern province of Balochistan.

The Islamic State of Iraq and the Levant (ISIL) had long claimed to have gained a foothold in South Asia, but Pakistan’s military and analysts suggested that this was merely posturing, in the absence of any operational capacity.

In October 2016, however, gunmen stormed a police training college in Quetta, killing at least 61 people. A month later, more than 52 people were killed in an attack on a Sufi shrine in Balochistan’s mountainous Khuzdar district. Three months later, another shrine was targeted, this time in the town of Sehwan in Sindh province, killing more than 88 people.

ISIL claimed responsibility for all three attacks, with the group’s Amaq news agency releasing images of the attackers to corroborate the claim.

The group, however, worked mainly in conjunction with local armed groups, particularly the Lashkar-e-Jhangvi’s al-Alami faction, analysts say. The group has “no organised presence” in Pakistan, according to the Pakistani military’s statement.

“[ISIL] had got support from sectarian organisations in Pakistan [such as Lashkar-e-Jhangvi], because it is also sectarian in nature,” says Zahid Hussain, an Islamabad-based analyst.

“But since Daesh has been almost decimated in Iraq and Syria [earlier this year], the appeal for fighters in Pakistan has gone down.”

Moreover, says Hussain, the military and government have shown “zero tolerance” for ISIL, wary of the establishment of another armed group in the country.

Khan, the analyst, points out that ISIL’s strategy in Arab countries has always been focused on the territorial acquisition, as opposed to al-Qaeda, the Taliban’s old ally.

“The difference between ISIL and al-Qaeda is … how they are reimagining themselves as a territorial group. Al-Qaeda always saw itself as a diffused transnational movement … not a territorial entity,” she says.

“Having sympathisers in some of the radical elements or hardcore extremists in Pakistan is a different thing from transplanting themselves as a viable organisation that has a presence in Pakistan.”

Wounds and signs of trauma

As Pakistan touts its gains against armed groups operating in the country, having displaced the Tehreek-e-Taliban and its allies from the territory in the northwest they once occupied, analysts warn the war is far from over.

“[The armed groups were born] in a certain area, there were drivers of conflict in [the tribal districts], and to change that is what Pakistan needs to focus on,” says Khan.

Earlier this year, Pakistan’s parliament passed a bill that would merge the erstwhile Federally Administered Tribal Areas (FATA) into Khyber Pakhtunkhwa province, reversing decades of repressive state policies where the region was governed directly from Islamabad and where most Pakistani laws – including those relating to human rights – did not apply.

“This continuous security threat that the Tehreek-e-Taliban posed to daily movement and life, it starts where the repressive cycle of the Pakistani state begins [in FATA],” says Khan.

Since May, the government has been working on implementing a set of legal and administrative reforms that would see the former tribal districts governed in line with policy across the country, with greater resources devoted to governance and citizens allowed full rights and access to the country’s justice system.

“Clear, hold, build and transfer are the cardinals of anti-insurgency operations,” said the Pakistani military in a statement. “We have cleared, we are holding and building concurrently and we are selectively transferring according to the situation and threat matrix.”

Hussain warns that there is another danger in Pakistan’s policies: that of selective action against armed groups.

“The level of violence has come down, but the threat of militancy is far from over,” he says. “It has taken different shapes. Sectarian militancy is still hounding the country.”

Pakistan is home to roughly 32 million Shia Muslims, as well as millions of Christians, Hindus and members of other minority Muslim sects. These groups have often found themselves targeted by armed groups.

“The action against armed groups happened in a patchwork,” says Hussain. “Some groups were targeted, but generally the campaign to curb extremism has fallen short of expectations.”

Back in Peshawar, the cold winds of December are blowing once more.

“Like an old injury in the winter, when the cold comes, we can feel these wounds open up again every year,” says Akbar Khan, 60, whose son Umar, now 20, was badly wounded in the attack on the Army Public School.

Umar still struggles, he says. From time to time, he will panic if he hears a loud noise, running through the house demanding that all the doors and windows be closed, latched, locked and secured.

“I see signs of the trauma, every day,” says Khan, who says he still feels anger that such an attack could have happened.

“It is such a strange thing. What is a state? If the institutions of a state cannot function and keep people safe, then what is the point of them?”

The complicated truth behind Kashmir’s ‘normality’

Mahathir Mohamad: Muslim world 'in a state of crisis'