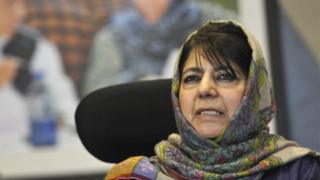 Ms Mufti – under house arrest in the state capital Srinagar – said those who had participated in India’s democracy had been “pushed to the wall”.

Delhi has revoked Article 370, which guaranteed significant autonomy to the Muslim-majority state.

Ms Mufti said the decision betrayed Kashmir’s decision to align with India in 1947.

Article 370 allowed the state to have its own constitution, a separate flag and independence over all matters except foreign affairs, defence and communications.

Ms Mufti, speaking to author and columnist Aatish Taseer in an exclusive interview for the BBC, said “we the people who had faith in the constitution of India have been proved wrong.

“We have been let down by the same nation we ceded to,” she said, adding that it seemed as though the state had made the “wrong choice” in aligning with India rather than Pakistan during partition in 1947.

All of Kashmir is disputed between India and Pakistan. Both claim it in full but control only parts of it.

The two neighbours, both nuclear powers, have fought two wars and a limited conflict over the Himalayan territory since the independence and partition of India seven decades ago.

Home Minister Amit Shah, who announced the move in parliament on Monday, had said that Article 370 was directly responsible for poverty and the subjugation of women in the state.

Article 370 included a special provision that said only permanent residents could own and buy land in Jammu and Kashmir and gave them special privileges in education and jobs.

But Mr Shah said it prevented the people of the state benefiting from the central government’s affirmative action policies, such as quotas in educational institutes.

The decision of the government will help the people of J&K the Most. More investment, more industry, more private educational institutions, more jobs and more revenue.

However Ms Mufti said the decision was a “sinister one” designed to change the demographics of the only Muslim-majority state.

She had been placed under house arrest in the hours leading up to Mr Shah’s announcement as tens of thousands of additional troops were sent into the region.

She said that while it was too early to think about a response, she hoped “all the stakeholders, all the political parties, religious parties and other parties would fight together”.

“This constitutional relationship has been turned into an illegal occupation. So that is what we are going to be fighting about now,” she said.