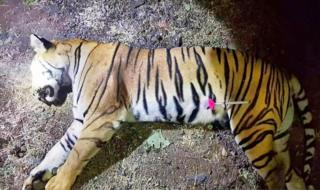 India’s forest officials are trying to capture two orphaned tiger cubs because they are feared to become man-eaters, authorities have told the BBC.

The two cubs’ mother was shot dead in Maharashtra state after a major hunt earlier this month as it is said to have killed 13 people.

The six-year-old tigress had evaded capture in the jungles of India’s western state for two years.

“They need to be rescued because they can become a potential threat to human beings in and around the area they are in now,” AK Misra, Principal Chief Forest Conservator of Maharashtra state told the BBC.

“The area the cubs are in now is a mosaic of forests and agricultural land,” he added. “And we fear they may go for human beings as easy prey.”

Mr Misra said for now the cubs could survive by hunting small wild animals in the forests of Yavatmal.

“But because this area is not a national park nor is it a proper forest, they may go for easy prey in the nearby human settlements. And we want to pre-empt that potential danger for human beings in that area, ” he said.

He added that forest officials had traced the cubs’ locations but because of difficult terrain their capture was taking some time.

“We are waiting for the right opportunity to tranquilise them. We are not on a hot pursuit; we want to make sure that we do this successfully.”

The killing of the cubs’ mother, known as T-1, had enraged conservationists who had demanded that the tigress be captured.

The hunt for the tigress included more than 100 camera traps, horses and goats tied to trees as baits, round-the-clock surveillance from treetop platforms and armed patrols.

Wildlife officials also brought in bottles of the cologne, Obsession for Men by Calvin Klein, which contains a pheromone called civetone, after an experiment in the US suggested that it could be used to attract jaguars.

In August the tigress and her cubs killed three people in the area around the town of Pandharkawada in Yavatmal district and left more than 5,000 residents fearing for their lives.

Since then, locals in the region have had concerns about whether the cubs too have tasted human blood.

“They might not have tasted human blood,” said Mr Misra, adding that his field staff have secured pictures of the cubs using camera traps.

He said it was not clear what will be done with the cubs once they are captured.

“Once they are captured, the relevant authorities and personnel will meet and decide how and where these cubs will be rehabilitated.”

With more than 2,200 big cats, India is home to 60% of the world’s wild tigers, an endangered species.

There are more than 200 in Maharashtra, but only a third of them live in the state’s 60 protected areas, including sanctuaries, natural parks and tiger reserves.

Conservationists say their natural habitats in India are shrinking because of human encroachment.

Human-wildlife conflict is seriously on the rise in India.

Government’s figures have shown that each day one person is killed by elephants and tigers in the country.

EU closes in on system to screen foreign investment